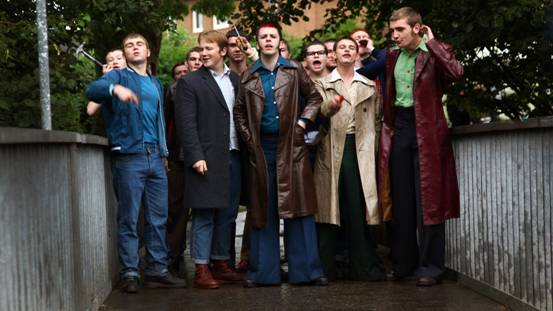 John McGill (Connor McCarron) is a bright young thing faced with a not particularly bright future. Growing up in Glasgow in the late '70s, he seems destined to follow his father (writer and director Peter Mullan) in to a menial job. Despite his furious intelligence, his prospects seem limited and unfulfilling. Faced with no viable options, he follows in the footsteps of his older brother Benny and becomes part of one of the gangs of feral youths that roam the streets, inflicting increasingly vicious acts of violence on each other. John becomes a Non-Educated Delinquent.

Neds is not a film that should be seen in a cinema, but in a nice, warm bath as you open up a couple of veins and drift slowly into oblivion. It makes the mistake, like so many British films before it, of confusing unremittingly misery with gritty realism, and assumes that just because it uses grainy film stock it can get away with a plot filled with overwrought melodrama and clunky plot contrivances.

From pretty much the first frame to the last, John's life is depicted as a series of grim, hopeless episodes in which things go from bad to worse with no hope or end in sight; on his last day at his old school, a boy from John's new school comes up to him and threatens to kill him, which in turn leads Benny to beat him up, baptising John into the world of violence that will soon consume him; at the new school, he is put into a lower class and is ritually humiliated for being the smart one; then he joins a gang, only to find himself thrown out of school, his home and, eventually, the gang itself. It is just misery piled on misery, like a drive-by shooting at a funeral.

This bleakly nihilistic view of life wouldn't be so bad if Mullan had the conviction to follow it through to its logical conclusion, but he is prevented from doing this by a rich vein of condescending moralism that courses through the film. Mullan seeks only to condemn his characters, not to engage with them, which makes it impossible to care about anything they do, and at no point does he attempt to understand the appeal of being part of a gang.

Obviously, gang violence is not to be condoned, but in order to make John's decision to start cracking peoples' skulls open make any kind of sense, we need to see why he would want to be in a gang in the first place, but in Mullen's world of little grey people living out their little grey lives in little grey houses, there doesn't really seem to be any incentive. It's as if Goodfellas started the way it ends; if Ray Liotta's started out as a paranoid, coked-addled freak, the audience would be completely bemused as to why anyone would want to be a gangster in the first place. So it is with Neds which, unlike Shane Meadows' sublime This Is England, does not seem to realise that in order for a character to fall and reach a point of self-discovery, they have to rise in the first place. I don't want to be someone who preaches formula, but when the alternative is this ineffective and toothless, sticking to tried and tested ideas might not be the worst idea in the world.

For a film with such a muted colour palette, there isn't that much shading in the film. Everyone is either wholly bad or wholly good, and the characters couldn't be more broadly drawn if they were spray-painted on to a wall. The worst example of this is Mullan as John and Benny's father. He's an abusive drunk who calls his wife "Cow" and "fat bitch" until she meekly comes down to sleep with him. There is literally nothing redeeming about him, and it is hard to take anything he says or does remotely seriously because he is such a grotesque caricature of a human being. The same could be said of every character in the film, none of whom feel like real people, but archetypes.

Despite everything I have said, Neds is not a wholly bad film. There are some exciting scenes, some funny scenes, some terrifying scenes, and there are moments of real beauty sprinkled throughout the film, such as one sequence in which John, high from sniffing glue, has a seemingly religious epiphany and meets, then fights, Jesus. It's just that you have to wade through the mire to find them, and when the film plods along, reaches a conclusion, then ends twenty minutes later, it's hard to care about those all-too-brief moments of promise.