You think you can escape history. You live for the present. 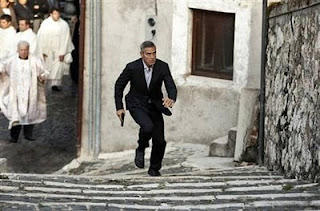 Anton Corbijn's second feature film opens with a scene of shocking violence. The act itself is not gratuitously or disturbingly violent, but it is nonetheless surprising because it sees the protagonist of the film (played by the effortlessly charming George Clooney) murder someone in cold blood. Not because they have betrayed him or pose a threat to his life, but because they are there. In one slyly subversive move it breaks a rule that most mainstream American films would never dare; it immediately makes us doubt, or even hate, the hero.

But is The American a mainstream film? Sure, it stars one of the biggest movie stars in the world and sets itself out as an action-packed spy thriller in that opening scene, when "Jack" - the film is coy about his real identity - barely survives an assassination attempt at the Swedish lakeside cottage where he is staying, but from that point the film shifts to being a more sombre, meditative film. It lures people in with a Bourne sensibility, then switches to an arthouse film about the weight of conscience and the effects that being a professional killer has on a man's soul.

After his brush with death, "Jack" flees to Italy, where his mysterious benefactor tells him to hide out in a small, isolated hill-top community until he receives further orders. Soon after, he is told that he must build a rifle with very specific requirements for "Mathilde" (Thekla Reuten) so that she may complete a job which "Jack" can know nothing about. As he sets about his task, "Jack" befriends a local priest (Paolo Bonacelli), who he has long conversations with about guilt and redemption, and begins a relationship with a prostitute (Violante Placido) that starts purely sexual, but quickly turns romantic. The combination of his spiritual and emotional awakenings consume him, and cause him to question the choices that have led him to this place.

Corbijn, who spent much of his career as a photographer and creative director for Joy Division, U2 and Depeche Mode amongst others before breaking into feature directing with his Joy Division biopic Control, evokes many great thrillers and European art-films of the '60s and '70s in his slow, rhythmic pacing and glorious photography. The film plays like a cross between The Day of The Jackal, The Conversation and L'Eclisse, but sadly lacks either the depth or mystery of the works it emulates. Corbijn certainly has the style down, but the film feels flat and lifeless.

Part of the problem is George Clooney's central performance. Whilst Clooney is a very engaging presence in most of his films, here he is required to play a stony-faced professional who keeps everything tightly inside. Whilst his stoic expression conveys this man's sense of ennui, he never quite convinces us that he feels any guilt or remorse. We know that he must do, because that is the nature of the story and the film is structured in such a way that the story must unfold that way, but we're never engaged with his journey in any meaningful way.

This in turn adversely impacts the way in which the film tries to generate tension in many of its action scenes, or non-action scenes as the case often is. The film is built around a series of anti-climaxes where we are led to believe that something bad is going to happen, in which scenes build towards what seems like a bloody climax, but which ultimately fizzle into nothing. This is a hugely effective technique when done well (The Sopranos spent six and a half seasons doing this brilliantly) but you need to feel something for the characters in the first place, so whilst the scenes are technically impressive, they lack the key emotional element that gives them their power.

The American is not without merit. It's intelligent, mature and concerned with weighty subjects, and it aspires to greatness, but all too often falls short. Admirable, but that alone does not make it great.
By Edwin Davies
Labels: 2010, anton corbijn, film review, george clooney, thriller
Newer Post Older Post Home