Is there anyone here named "Horse?" 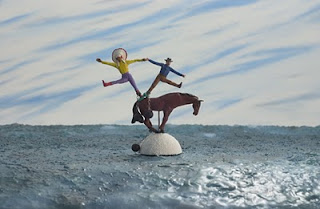 I'm about to admit something that is downright heretical in film circles. Those of a delicate disposition might want to avert their eyes and pray for my soul. Are you ready?Here goes; I don't find Some Like It Hot all that funny. That's not the same as saying that it is a bad film, far from it. I think it's one of Billy Wilder's best films, and since Wilder is one of my top five directors that gives you some sense of how much regard I have for Some Like It Hot. It just doesn't make me laugh.

The reason for this is that I think it is more of a manic film than an comic film; it's such a fast-paced, wildly energetic film that there isn't really time to laugh, so whilst I appreciate the film as one of the highest achievements of film-maker, I only laugh five or six times when watching it.

I mention all of this because I felt much the same watching A Town Called Panic as I do watching Some Like It Hot; swept away by the film's frenetic invention and beguiling silly sensibility, but I only laughed a couple of times during its 75 minute running time.

Adapted from the Belgian TV series of the same name, though British viewers will be more familiar with the characters and frantic stop-motion animation style from their use in a series of Cravendale milk adverts, the plot begins when Cowboy and Indian (who are, fittingly, a toy cowboy and indian) discover that they have forgotten their friend Horse's birthday. In a fit of panic, the two decide to build Horse a barbecue pit, and, intending to order fifty bricks to build it with, accidentally order fifty million bricks.

I could describe the plot further, but it would consist of a long list of "and thens" that would quickly descend into nonsense. And then the Horse and the Cowboy and the Indian went underground and then they travel to the North Pole and then they meet a group of mad scientists who are controlling a giant robot penguin which they use to throw giant snowballs at targets across the world. The film comes across as the film version of the adventures that a hyperactive and imaginative seven-year old child would come up with, throwing together an ill-assorted assembly of toys into a single narrative that gets ever more surreal and demented as it goes along.

At the same time, there is the same meticulous craftsmanship that is an essential part of stop-motion animation. It's clearly a labour of love for co-directors Vincent Patar and Stéphane Aubier and their team of animators, and the attention to detail throughout speaks volumes about the love they have for these characters. One of the problems with its relentless pace is that a lot of the details that have been worked into the background go by in an instant, and there is a real sense that you are missing a lot of the little things that have been crammed into every frame. The film is a procession of silly, nonsensical scenes, yet someone has clearly put a lot of effort into placing a pillow in just the right place so that the Horse model can sleep standing up.

That sense of fun and invention is pretty exhausting over the film's admittedly slim running time, and how much you enjoy the film will depend largely on how much unfettered whimsy you can take, but I found it an entertaining and charming slice of nonsense.
By Edwin Davies
Labels: film review
Newer Post Older Post Home