Button, button, who's got the button? 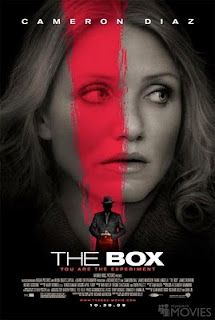 Kelly's debut, Donnie Darko, despite being made on a very modest budget of $6 million, made just over a twelfth of that at the U.S. box office, and only slightly more around the world. Fortunately, it went on to live a rich, full afterlife on DVD. Snatching victory from the jaws of defeat meant that Kelly could go ahead with his wildly ambition and insane follow-up, Southland Tales. Despite costing three times more than Donnie Darko and starring a couple of big name actors including Dwayne 'The Rock' Johnson and Sarah Michelle Gellar, Kelly's messy satire/mind-fuck, which Neil reviewed way back in 2008, made considerably less than its predecessor, and failed to find a sizable cult to help recoup its losses. Clearly, Kelly is not a man acquainted with success.

But that's if we only consider the financial aspect, what about the artistic success of a film-maker? What of their ability to make art that is distinctly and unmistakably their own? If we consider Kelly's career in these terms, then there are few American directors so successful at producing as singular, personal and just plain bizarre films right now. For proof of this argument, we only have to look at the way in which he turned a simple and sparse short story by Richard Matheson into a sprawling saga that takes the audience to Mars and back, and which turns the story's simple morality tale into a fulcrum upon which the entire fate of humanity pivots.

At the beginning of the film we are introduced to a middle-class couple (Cameron Diaz, with a ridiculous accent that is impossible to take seriously, and James Marsden) who dream of better things. Marsden works as a technician for NASA, but has applied to become an astronaut, and has already splashed out on a Corvette that matches his aspirations. Similarly, thanks to a discount offered at the school she teaches at, they are able to get their son an education they would never otherwise be able to afford. These early scenes economically establish the financial situation of the family without feeling the need to beat the audience of their head with their chequebook, and luxuriate in the period trappings of the 70's setting.

The promise of social mobility seems to evaporate before their eyes, though, when Marsden discovers that his application has been rejected, and that the discount for their son has been revoked. It's at this point of financial woe that the Box of the title enters the picture. It is a squat black cube with a single button, unattached to any electronic device, left on their doorstep with only a note saying that its owner will come to see them the next day.

That owner is played with a mix of grace, pathos and a queasy, indefinable menace by Frank Langella. Sporting a natty fedora and horrific burns where the left hand side of his face used to be, he offers Diaz a proposition. If she pushed the button, two things will happen; someone, somewhere, who she doesn't know, will die, and she will be given $1 million dollars. There then follows ten to fifteen minutes in which Marsden and Diaz discuss the likelihood that the button will actually do anything, whether or not it poses a threat to them (Kelly's script shamelessly flirts with the original ending to the story by having Marsden suggest that the button could kill him, since even though he and Diaz are married, do they really know each other?) and their ultimate decision to press the button.

All credit should go to Kelly for realising that the plot of Matheson's "Button, Button" is not enough to sustain a feature film, especially since it barely stretched to an episode of The Twilight Zone in the 1980's, and his decision to accept the limitations of the story by having it end 35 minutes into the film is commendable. It's easy to see how most other directors could have stretched that simple premise to fill 90 minutes without even a hint of the menace and suspense that Kelly builds up in that opening third.

However, that decision also leaves him with 75 minutes of film to fill, and he fills it. Oh my, does he fill it. The rest of The Box consists of enough quasi-mystical conspiracies, bizarre coincidences and inexplicable mythological happenings to fill an entire series of Lost. Bolting his own creation onto the bare bones of Matheson's story is like taking a slim novella and then sticking an only tangentially related novel onto the ending of it. And not even a short novel. An early-80's Stephen King novel. It's an inelegant beast that lumbers from scene to scene, giving us more and more information without offering any compelling explanation or conflict. It takes us further down the rabbit hole without ever actually reaching Wonderland.

However, even though it is a deeply flawed film, I was at least partially won over by Kelly's wild ambition. He's clearly got more ideas bouncing around in his head than he knows what to do with, and even if the films he makes from those ideas are increasingly indigestible, I just love the fact that he is somehow able to get away with making films so brazenly bizarre. I doubt that The Box will garner the same cult attention, or even the same scorn, of his first two pictures, mainly because the post-button pressing part of the story feels too rushed to be really fascinating or truly frustrating, but at the very least it isn't predictable.

Where Richard Kelly goes from here should be interesting. Since no one in their right mind is going to keep throwing money at a man whose movies keep failing, even if The Box barely making its budget back means that he is at least failing better, Kelly is either going to have to tone down the weirdness that I find so fascinating, or start making movies much more cheaply. Alternatively, maybe his next furiously uncompromising film will be the one that finally makes a heap of money. Best of luck to the guy; the world needs its weirdoes.
By Edwin Davies
Labels: film review
Newer Post Older Post Home