Doctor Who -The Hungry Earth 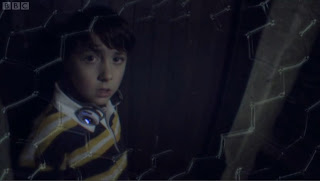 After delving into The Doctor's subconscious last time, this episode brings us back to terra firma, or terra un-firma, since The Doctor, Amy and Rory land in a small, quiet Welsh village in which some local geologists - played by Robert Pugh and Meera Syal - have been drilling into the Earth, causing it to "feel strange" to The Doctor, and also start opening up holes in the ground which swallow people up. Using the sonic screwdriver to look through their files, as well as a bunch of technobabble about jungle planets which confuses his audience ("Excuse me, I'm making perfect sense; you're just not keeping up."), The Doctor discovers that Syal and Pugh weren't the only ones drilling; whilst they were drilling down, someone else was drilling up, and now three shapes have appeared on their motion detector screen and they're heading for the surface.

Whilst The Doctor and Amy are off discovering that they've got company on the way, Rory gets to go off and be Jonathan Creek, pondering how a woman's dead body and coffin disappeared from her grave despite the ground above it being untouched. He's paired up with Elliot (Sam Davies), a young lad whose father Mo was swallowed up by the Earth in the pre-credits sequence. It's mainly designed to introduce us to Elliot, who is dyslexic but, thanks to the miracle of audiobooks, can quote Arthur Conan Doyle and seems like a pretty swell kid, as confirmed by a later scene with The Doctor in which he talks about his desire to get away from this small, abandoned town as soon as he is old enough. They also seem to be setting up the idea of "graves eating people" being a major factor in the concluding part, but being ignored in the face of more pressing manners.

As in previous episodes, The Doctor tries his best to save everyone but actually makes the situation worse when he makes a mistake. After their little chat about escaping the provinces for the bright lights of the big city/universe, he lets Elliot leave the church in which they have all taken refuge in order to find headphones. As a result, when the mysterious shapes arrive Elliot is out on his own, and The Doctor realises that he has made a possibly fatal error, as he is taken by when the people inside the church can't open the door in time. And when Elliot's mother Ambrose runs outside to look for him, she is attacked and almost taken herself. Pugh saves her at the last minute, but is stung by the creature's long tongue, which later manifests itself as a spreading patchwork of green veins.

The Doctor and Rory, with the help of some nifty sunglasses that allow them to see in the dark, manage to capture one of the creatures, discovering that they are the Silurians, the race who inhabited the Earth before humans and who have been awoken by all this infernal drilling. Now with a hostage of their own, and a radical fundamentalist one at that, and The Doctor and Syal head down, deeper and down, to try to speak to the leaders of the Silurians to try and reach a detente. (I'm a bit concerned that the show is going to make an awkward analogy about religious fundamentalism that, considering recent events in Israel, could be a little bit unfortunate.) Meanwhile, we discover that Amy is still alive, and being held in an incredibly claustrophobic see-through box.

This episode was written by Chris Chibnall, whose previous credits include working on Torchwood, which I was never a massive fan of, Life on Mars, which I was, and he also wrote the Tennant-era episode '42', which must rank as one of the worst in the history of the show. This episode was much better, but it was also quite strange, and not in a science-fiction way. It seemed to veer from one different idea to the next - holes swallowing people up, a forcefield around the village stopping the characters from escaping, Elliot being chased through a graveyard in a way that reminded me of the last twenty minutes of Signs - but with none of the ideas really seeming to gel together. I accepted that all these things were being caused by the creatures that kidnapped Mo, Amy and Elliot, but they seemed like very disparate elements that happened to all be part of one story. In the end, they built to two very effective cliffhangers - The Doctor and Syal surveying an entire civilisation of Silurians, not just the dozen that The Doctor was expecting, and a Silurian surgeon advancing on Amy with a scalpel, preparing to dissect her while she was still alive - but the journey to that point was a bit jerky.

Still, a very enjoyable episode whose individual elements worked well, even if the whole was less convincing. As with The Time of Angels/Flesh and Stone, I can't offer a complete verdict until I've watched the second half, so for the moment I'll just review this episode and come back next week to rate how the two parts work together.