And we're back! After a long, broken laptop-induced break, I'm back to blogging. I'm going to do my yearly Oscar predictions tomorrow, but for the moment I'm going to try to catch up on some reviews I've missed out on.

Mother, you had me/but I never had you - "Mother", John Lennon 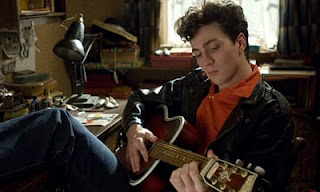 When I was a faintly ridiculous, pretentious 16-year old - as opposed to my current standing as a faintly ridiculous, pretentious 23-year old - I was obsessed with The Beatles and I read Ray Coleman's exhaustive Lennon: The Definitive Biography. Whilst I no longer have quite the blind devotion I once did - I would not, for instance, consider re-buying all their albums in stereo - Coleman's book has stayed with me because it offered an insight into Lennon's traumatic childhood, and the way in which his relationships with two women, his mother Julia and aunt Mimi, defined him and his music.

It is this relationship that artist Sam Taylor-Wood focuses on in her debut feature, Nowhere Boy. John Lennon (Aaron Johnson) is a 17-year old tearaway who spends his days listening to music, skiving school and chasing after girls. With his Buddy Holly glasses, sardonic wit and aimless intelligence, he seems out of place amongst his peers, but he's trapped, with no outlet for his energies. This begins to change when, after his uncle dies, John becomes reacquainted with his mother (Anne-Marie Duff), who introduces him to the sexually charged world of rock and roll, to the chagrin of John's stern aunt Mimi (Kristin Scott Thomas).

Rather than try to make a definitive film about the artistic life of John Lennon, Taylor-Wood and written Matt Greenhalgh - who has prior form at penning musical biopics, having written Ian Curtis film Control - craft an affecting, if unimaginative, melodrama about a young man torn between two women; the one who raised him, and the one who gave birth to him.

Like the best music biopics, the film sets out to explore the personal development of its subject, rather than the musical development. Whilst there are scenes in which Julia teaches John how to play the banjo and Paul (Thomas Sangster) talks about the need for them to write their own songs, the focus of the film is on John's relationship with Julia and Mimi and the tug-of-war between them. There's a strangely Oedipal tension to the scenes between Johnson and Duff as son and mother, having never really known each other, are unsure how to act around each other, further confusing John's already turbulent adolescence. Johnson is pretty magnetic as Lennon, and even if he veers towards caricature rather than character, he at least captures the essence of the young Lennon and gets across his undoubted charisma and darker, sullen side.

The key performance in the film, though, is that of Kristin Scott Thomas, who exudes glacial calm and poise as Aunt Mimi. Mimi has taken on a minor pop culture cache of her own, being such an important figure in the life of a man who would help redefine popular music, and Thomas' performance stands as both a rendition of the mythical Mimi but, more importantly, as a real human character in her own right. She manages a delicate balance of sarcasm, stoicism (upon telling John that her husband, his uncle George, has died she tells him to stop crying and that "It's just the two of us now, so let's get on with it") and deeply felt love for John. It's a really nuanced performance that adds the most dramatic weight to the relationship, and makes the final third of the film - in which John learns the "truth" about why Mimi adopted him - much more powerful than it would otherwise be.

I say "truth" because, as with all music biopics, the film-makers play fast and loose with the facts of John's relationship with his mother in order to suit the narrative and the story, so whilst there is a degree of truth to the film, it is still a constructed narrative used to explore the tensions that would forge John Lennon, musician, from John Lennon, scared teenage boy. And I think it works very well since, even though I knew the film was taking liberties, I completely believed in its world and its versions of events as a self-contained story.

It won't start a revolution (Groan.) but Nowhere Boy is a well-crafted, well-acted chamber piece that avoids the banality of most biopics by ignoring the music in search of a more emotional truth.
By Edwin Davies
Labels: film review
Newer Post Older Post Home