I Am Trying To Break Your Heart

A film about Wilco 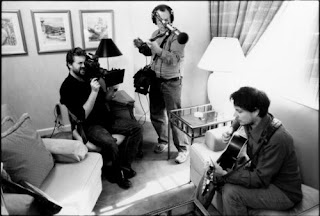 As someone who has always had a great appreciation of music but little understanding of how great music is created, I've always been fascinated by anything that offers a look behind the scenes of the creation of an album. I've also been disappointed by them since, by and large, any films or TV programmes that offer to take people behind the curtain and show them how music is created are usually overly reverential puff pieces that want to sell the record, rather than offer any real insight.

I Am Trying To Break Your Heart is not such a film, though I suspect that it probably started out as one. Photographer Sam Jones asked the band as they prepared to enter the studio to record their 4th album - which would ultimately become Yankee Hotel Foxtrot - if he could film them during the creation of the album. The band agreed and Jones began filming, unaware that he and his cameras would be party to one of the most turbulent times in the band's career as their drummer, Ken Coomer, and multi-instrumentalist Jay Bennett left the group, and the band were dropped by Reprise after completing the album.

Jones' camera captures all the high and low points of the band during this period, showing both the elation they feel when performing and when they complete a track and the tensions between the band-members and the emotional strain it puts on Jeff Tweedy, the migraine-plagued lead singer. The key relationship in the film is that between Tweedy and Bennett and, prior to his departure, we get ample opportunity to see how they work together. The scenes of them in the studio have a real tension to them as the differing approaches of the two men to their music come into conflict, with Bennett stressing the importance of trying differing things and working on individual tracks and Tweedy just wanting problems "fixed" and being more concerned with the overall concept of the album.

The film conveys the dynamics of the group very nicely - reductive summary: Jeff's the boss - and the departure of Bennett from the band is the emotional lynchpin of the entire film as we bear witness to the collapse of a professional relationship and a friendship in unsparing detail. The scenes have the raw, uncomfortable aura of a fight at a party, with the other band members at the sidelines, unwilling to participate. It's hard not to paint Tweedy as the villain in the situation since he is the one who decides that Bennett should no longer be in the band, but the film does at least provide a sense of context for their prior relationship and gives us enough of an insight into Tweedy as a person that he does not come out as the devil incarnate.

Aside from the band politics, Jones also documents the the relationship between bands and record labels, as well as the absurdities that can arise. We are shown meetings between Wilco's management and the label, as well as interviews with the previous head of the label, in order to illustrate two differing styles of management in the music industry; the old executive says that he would never drop a band like Wilco because of their acclaim and their dedicated fanbase, and the current executive decides to drop Wilco because their previous albums had not sold to expectations. It's not a new point for the film to make, but it's one of the more concise examples of that mentality that I've ever seen. The film ends with a brilliant illustration of the quaint madness of the music industry as Wilco are signed to Nonesuch Records, a label which, like Reprise, are part of Warner Music Group, prompting a member of the band to quip that Warner hated the album so much they paid for it twice.

I Am Trying To Break Your Heart is a hugely accomplished documentary that will appeal most to Wilco fans, since they are the focus and because there's plenty of live performances in there, but anyone who loves music and wants to know more about how bands operate, both as a unit and with labels, will find a lot to like in it. It's the most insightful and unblinking depiction of a band in crisis since the Maysles brothers' Gimmer Shelter.
By Edwin Davies
Labels: film review
Newer Post Older Post Home