Where The Wild Things Are

I didn't want to wake you up, but I've got something to show you... 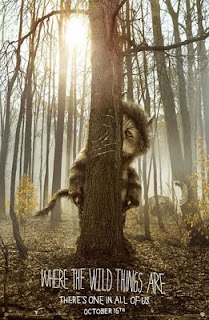 Spike Jonze's adaptation of Maurice Sendak's classic book opens with a sequence in which Max (Max Records), dressed in the iconic wolf suit, chases a dog around a house. It's a scene full of humour, as Max yips and barks aas he pursues his quarry, but the violent camerawork and the way Max throws himself after the dog undercut the silliness of the situation. The juxtaposition of seeming whimsy with implied violence in the scene sets the tone for the rest of the film.

The film is, in places, incredibly dark - given the expectations of a film that children will see - with the Wild Things themselves playing a large part in that darkness. Though they often seem fluffy and the physicality of actually having actors in suits play them makes them seem slightly ridiculous, the film establishes quite early on that their size is not just a by-product of the studio wanting to sell fluffy toys of the characters; they're that big because they are strong creatures with an immense capacity for destruction.

We are introduced to the Wild Things when Max runs away from home and, after sailing across a vast ocean, arrives on their island. Carol (James Gandolfini), the most compassionate but also the most destructive of the Wild Things is smashing up a bunch of houses in a fit of rage after his friend, KW (Lauren Ambrose) has left. The sequence, shot in an eerie half-light, is at once quite amusing, as we see this large bundle of fur throwing himself at houses made of woven sticks, but also frightening since we get a sense of his power and his temper.

The uneasiness between the outward amiability of the Wild Things and their barely suppressed emotions is a near constant throughout the film, lending each scene a tension that you really don't find in most kid's films. There is a sense throughout that at any moment one of the Wild Things could flip out and start arguing with another, and that they could move from play-fighting to malicious acts of violence just as quickly. Imagine every family argument you've ever had, every petty squabble that blew up into something much worse, then cram them all together into a 90 minute period and you'll get a sense of the tone of Where The Wild Things Are.

The reason for this sense of anger and frustration throughout the film is that Max brings these emotions to the land of the Wild Things and each of them represents some aspect of his own personality. The Wild Things, far from being otherworldly creatures, are very much rooted in human - but more importantly childish - emotions, with each of them having their bouts of jealousy, anger and loneliness, all of which stem from Max and the connection between them and him is reinforced very early on. In the first ten minutes of the film we see Max engage in a snowball fight with his older sister's friends. Max hides in an igloo he built as a kind of fort and one of the older kids destroys it, reducing Max to tears and causing him to then destroy his sister's room. This pattern - moments of joy followed by moments of futile anger and destruction - is repeated throughout the film, except as the film progresses Max moves to being the mature party in the altercations as he tries to deal with the Wild Things and their own destructive habits.

It'd be wrong of me to represent the film as completely downbeat since there are plenty of moments of humour and, as I've already said, moments of joy. Seeing Max and the Wild Things running through a forest, engaging in dirt clod fights or banding together to build a fort are moments of controlled but absolutely charming whimsy. It's just that these moments are there to punctuate the film, rather than to define it. Everything about the film is geared towards a more downbeat feeling; the autumnal cinematography; the score by Carter Burwell and Karen O, which has bursts of energy but is more often than not characterised by mournful acoustic guitar; and the performances of the voice actors, all of whom give performances that are adult in cadence but childish in tone. There's a sense of being in transition, of the world being caught between seasons and of the characters being caught between different stages in their lives. Both Max and The Wild Things have the capacity to be mature but not the emotional ability to deal with those responsibilities.

Where The Wild Things Are is a film about what it is to be a child, the joy and the sense of imagination that comes with being very young, but that means covering the bad parts as well. Anyone who has ever had a fight with their parents or had to come to terms with a life change that is beyond their understanding, such as the divorce between Max's parents which forms the backdrop of the film, will identify with Max as a child unable to express himself except in the most inappropriate and hurtful ways. The film is very much about his maturation and how his adventures with the Wild Things make him come to terms with his own problems and the consequences of his actions. In some ways it reminded me of Spirited Away, in that both films are allegorical accounts of the end of childhood and often painful process of growing up, though I don't think that Jonze's film has quite the magic that Spirited Away does.

It does have a magic of its own, though, and it is a beautiful film. It's deeply sad and melancholic, and it may be a bit too intense for young children who might not quite be able to grasp what the conflicts in the movie are about, but as a depiction of the internal conflicts of childhood it is absolutely sublime.
By Edwin Davies
Labels: film review
Newer Post Older Post Home