So, last Monday I, like seemingly everyone else in the Western world, went to see Avatar, James Cameron's science fiction epic about blue cat people re-enacting the plot of Pocahontas. I enjoyed the film quite a lot; I though the plot, whilst very, very predictable, was carried off with gusto, the action set-pieces that littered the film were exciting and frenetic without sacrificing cohesion, and the effects were absolutely glorious and created a fabulous world.

I'm going to write a full review of the film later this week - I'm hoping to see it again to just shore up my opinions about it - but I wanted to write a separate entry entirely devoted to the aspect of the film that has been the most trumpeted - its use of 3D - so as not to bog down my review with my concerns. 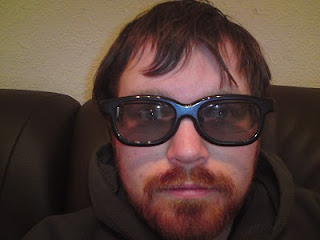 My issues with the 3D are not to do with the experience itself which was great and, apart from a slight bout of nausea at the start of the film which was more to do with acclimatising to wearing the 3D glasses over my regular glasses, I found nothing about the actually experience of wearing the glasses to watch the film all that difficult or intrusive. No, my issues are with the implementation of the 3D and the question of whether or not it added to the experience of watching the film.

The phrase that is being thrown around a lot whenever people describe the RealD 3D process is 'immersion'. Unlike old 3D, the kind used in the 50s, 70s and even today in theme park attractions such as Shrek 4D and T2:3D (proof that Cameron is no late-comer to the 3D party), which was often used to point things at the audience (for a recent example, see the remake of My Bloody Valentine, which made full use of its pickax-wielding killer) where this new process is all about pulling the audience into the film by creating space and depth that 2D, theoretically cannot provide.

This year, many animated films have employed 3D to exactly this effect. Pixar's Up used 3D to create a sense of vastness and scale for the film's Paradise Falls locale, whilst Henry Selick's Coraline used 3D to help delineate between the Real world and the Other world that its heroine travelled between, with the real world being flat, grey and dull, and the Other world being given a sense of hyper-reality by being rendered in colour and in 3D.

Even though both those films utilised 3D in intelligent and subtle ways, I can't help but think that there is an erroneous presumption at the heart of their use; the presumption that you need 3D to create a sense of scale or an sense of something being otherworldly. I saw both Up and Coraline in cinemas in 2D and at no point in either did I feel that I was losing anything by not experiencing that extra dimension. Up's world was vast in 2D and the use of colour and music in Coraline aptly illustrated why Coraline would find the Other world so fascinating compared to her dull reality. It seems that all 3D adds to both films (apart from a few pounds extra on the ticket price) is an augmentation of their existent merits, rather than a genuinely new dimension.

To return to Avatar, the reason that I want to see it again is that I want to see it in 2D, because I feel that everything that I liked about the film is to do with everything but the 3D, which was very good and certainly light years ahead of the 3D I'm used to, but which as far as I could tell did not actually add anything to the experience. Any sense of immersion in the world I felt could be attributable more to the visual effects than the effect of the 3D, since it is the wealth of invention and imagination that has been put into the creation of Pandora that drew me in, rather than the 3D. Similarly the story, as predictable as it was, was involving enough for me to care about the characters, something which the 3D would not be able to engender.

The 3D in Avatar is bizarrely counter-intuitive. The story takes place within two distinct realms; half the film consists of the protagonist, Jake Sully, played by Sam Worthington, inhabiting his avatar and running around on the lush and verdant surface of Pandora, whilst the other half consists of Jake talking with scientists and military men inside confined interior sets. The paradox of my experience was that whilst at no point was I taken out of the story by the sections concerning Jake and the Na'vi, I frequently found myself disconnecting from the narrative whenever it switched to the military/scientist side. This was not down to the acting, which was uniformly solid across the board, or the writing, which was weak but was at least consistently weak, but because whenever the film went inside, the 3D became incredibly intrusive as bits of the sets would be really, really prominent and distracting in a way that they wouldn't be in 2D. Whereas the grand vistas of Pandora were so vast that you actually didn't notice that any 3D was being used at all. The most when the 3D should not have been noticeable were when it was at its most distracting, and the moments when it should have been apparent in all its glory it was almost as if it wasn't being used.

I'm no Luddite and I'm not writing this to bemoan 3D. I think that it is a perfectly viable extension of the medium and I'm sure that one day someone will find a way to do something truly revolutionary with it, I just don't think that Avatar is the film that does it. It does show us the possibilities of 3D, but it also confirmed to me that at worst it is a distraction and at best it can only marginally enhance what is already good in a film. With full awareness that I am putting into words something that may leave me branded a fool, I am going to say the following:

I think that in 10 years time, people will still be talking about Avatar and that it will be remembered as an important film. But it won't be talked about for its 3D. It will be talked about as a film that pushed the envelope of special effects and motion capture, and will be considered as part of the evolution of digital visual effects alongside Jurassic Park and The Lord of the Rings. But it will not be talked about for its 3D. I don't think that 3D will fail or be abandoned as it has historically, there seem to be far too many people - including big names like Steven Spielberg and Peter Jackson - behind it now for such a failure to occur, but neither do I believe that it is the future of cinema. I can easily see films like Avatar - i.e. blockbusters with bloated budgets - and CG animated films being increasingly reliant on it to increase ticket prices, as but beyond that I don't think it will become the industry standard.
By Edwin Davies
Labels: 3D, Avatar, Cinema, Future, James Cameron, Pixar, RealD, Up
Newer Post Older Post Home