Hmm, replace 'Fantastic' with 'Functional', 'Frigid' or 'Fatiguing' and you'll be closer to the mark. 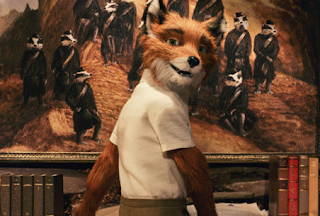 Mr. Fox (George Clooney) is a formerly wild fox who has settled into a quiet life of domesticity with his wife (Meryl Streep) and young son, Ash ( Jason Schwartzman). However, despite his family, friends and a steady job as a writer for a local newspaper (yes, he's an anthropomorphic fox who writes for a newspaper), Mr. Fox feels suffocated and yearns for his former life as a rascal and a roustabout, stealing chickens and harassing farmers. Drawn back into his old ways, Fox is soon on the bad side of Borris, Bunce and Bean, (one fat, one short, one lean) three of the meanest farmers you've even seen, and they want revenge against Mr. Fox and all his furry friends.

As I mentioned some time ago in this edition of Reasons to be Cheerful, Reasons to be Fearful, I am a massive, massive fan of Roald Dahl and, although it is not my favourite of his books (The Witches, by the way), I have an abiding affection for The Fantastic Mr. Fox and the combination of that source material with such an odd choice of director as Wes Anderson, whose work I generally like (Rushmore) and occasionally love (The Royal Tenenbaums), had me genuinely excited about the film adaptation. It seemed to promise so much, and when I sat down in the packed cinema, I waited with baited breath to see what bizarre concoction would usher forth.

Before I say anything else about the film and its, as far as I'm concerned, many, many flaws, I want to give it a chance to wag its tail proudly (before I shoot it off) and say up front that the animation is just terrific. Wes Anderson clearly has a deep love of stop motion animation (as demonstrated by its use in The Life Aquatic with Steve Zissou) and that love translates completely onto the screen. It is clear that this medium, which affords the film-maker such complete control, is perfectly suited to Wes Anderson, whose films have always been meticulous in their design, and I was genuinely astounded by how well his style of directing, which makes great use of the sort of constantly moving camerawork that is really difficult to do in stop motion, was transferred.

The movement of the characters is idiosyncratic, veering from beautifully smooth to intentionally awkward, and the animation on the characters' faces during close-ups (of which there are many, this being a Wes Anderson film) is really quite special. We see every hair and whisker move minutely, providing perfect vessels for the film's talented voice cast. It is clear that this medium, which affords the film-maker such complete control, is perfectly suited to Wes Anderson, whose films have always been meticulous in their design.

The problem with the film does not lie with its looks or its voice, though, but with its soul, since it is completely bereft of warmth, even if it does have its own quirky (Please let it be noted that I shuddered when I typed that word. I hate the word "quirky". It's a word that is all-encompassing and completely meaningless, acting as a shorthand for anything odd whenever someone with a limited vocabulary can't think of a more apt word to describe it. Which is why I am using it. I am nothing if not a hypocrite) charm. Sure, hearing George Clooney's silky voice talking about the existential malaise of being a fox and the essential paradox of him wanting to be more than what he is yet fully aware that he is just a "wild animal", and there is something marvelous about Bill Murray playing a badger, but aside from these chuckleworthy moments there is nothing weightier to the film to keep the interest.

Perhaps "weightier" is an ill-advised word, I certainly don't expect great emotional heft from a kid's film, least of all one directed by someone whose work is renowned for its flippancy, but I can't think of a better way of summing up what is lacking from the film. The archness that so typifies Wes Anderson's live-action films feels out of place in a medium that is dependent on the likability of the characters and a sense of excitement or peril to engender good will in the audience. If you compare it to Coraline, 2009's other high-profile stop-motion feature film, its deficiencies become apparent. Coraline, whilst not as overtly stylised as The Fantastic Mr. Fox, manages to get the viewer more emotionally invested in the world of Coraline Jones and her friends than Fantastic Mr. Fox ever does by making the peril seem real throughout. At no point do you feel that Fox and co. will fail to win the day because Anderson can't do peril. This is apparent from his other films, and I have no problem with it in those films, but a kid's film does need to be scary and exciting, it can't just amble along making jokes aimed at adults rather than trying to be all-inclusive.

It is this last point that irks me more than pretty much anything else. The film has clearly been made by people who resolutely do not make films for children since both Anderson and his co-writer, Noah Baumbach, have both made numerous dramatic comedies intended for adult, arthouse audiences. The problem is that they apply that approach to a film that is, nominally, a film for children, and I found that a little cynical. There is not much difference between Anderson and Baumbach slipping in jokes for adults whilst the animation distracts the kids and the likes of Shrek. Sure, it's a smarter film than Shrek, but the underlying principle is the same. Had they had the courage to make it an animated film aimed at adults I probably would have liked it more.

Now, some may argue that that is what they have in fact done because the film makes so few concessions to children, that much of its target audience will probably be Anderson's hipster followers, rather than children, and that it is the studio that are pushing it as a kid's film, but I think that the substitution of 'cuss' for a variety of swear words in the dialogue indicates otherwise; if they were making a film for adults, they would have left the swearing in and if they were making a film for children they wouldn't have even used 'cuss' at all. They are trying to have their cake and eat it too and they do so in a manner that is completely contemptuous towards their audience. It's cynical, cynical film-making.

It is not without charm and it is not without wit, but The Fantastic Mr. Fox is considerably not. Anderson's auteurist vision gets in the way of the story, excising the peril and darkness of the original story and replacing it with an ironic tone and lackadaisical pacing that does not suit a family film.
By Edwin Davies
Labels: fantastic mr fox, film review, george clooney, jarvis cocker, meryl streep, wes anderson
Newer Post Older Post Home