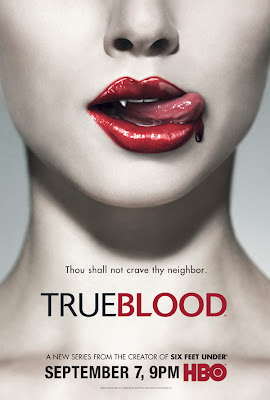 We're entering virgin territory on the blog today as I move away from my usual zealous pursuit of movies to turn my eye onto True Blood, the new HBO series from Alan Ball, creator of Six Feet Under and American Beauty.

Let's get it out in the open straight off so that no one gets their hopes up too high; it's not as good as Six Feet Under (which I would put in my Top 5 TV shows of all time, even if I really can't bring myself to ever rewatch ''That's My Dog'' ever again) but it isn't trying to be. Whereas Six Feet Under was a deeply complex and ambiguous show, True Blood is much more concerned with being popcorn television, albeit popcorn television that is on HBO so can fit in a tad more sex, violence and swearing than it might get away with elsewhere.

The show opens at some point in the not too distant future. It is two years since the world received a shock that no one was expecting; vampires came ''out of the coffin'' and revealed themselves to humanity. They've now got their own bars and underground culture, but are seeking equal rights to live amongst the living and several vampires have taken to ''mainstreaming'' in order to further the cause of vampire/human relations.

One such vampire is Bill Compton (Stephen Moyer), who arrives in the town of Bon Temps, Louisiana, and draws hostile stares from everyone in town, except for a local waitress, Sookie Stackhouse (Anna Paquin). It is not simple open-mindedness that draws Sookie to Bill, she feels a special connection to him since he is the first person she has ever encountered whose thoughts she cannot read. Yes, Sookie is telepathic, and the peace she encounters when with Bill draws her to him, despite the warnings of her boss, Sam (Sam Trammell), brother Jason (Ryan Kwanten), best-friend Tara (Rutina Wesley), and gay chef Lafayette (Nelsan Ellis).

Whilst comparisons to Six Feet Under may be unhelpful, given how wildly different in tone the two shows are, a better point of reference may be Twin Peaks. Whilst True Blood does not have the same essential weirdness of Twin Peaks, it's fairly open about its otherworldly aspects, both shows are about small-communities filled with odd characters, all of whom have their own secrets to hide and all of whom are threatened by a spate of serial killings. Not long after Bill arrives in Bon Temps, someone starts offing women, most of whom are friends with Sookie, and the central thread of the first season is the threat of the killer and the search for their identity.

This drives the rest of the series' disparate plot threads along; Sookie and Bill's relationship, Jason's experimentation with the effects of vampire blood, Bill's place in the vampire community, all of these aspects are underpinned by the central question of ''who is the killer?'' Whole episodes can go by without anyone getting killed or even any mention of the murderer, allowing the show to wend its merry way through the lives of its cast, but it's always there as the malignant heartbeat of the show.

The series is adapted from Dead Until Dark, the first in the Sookie Stackhouse novels by American author Charlaine Harris. This gives the series a very novelistic feel to its narrative, with each episode serving as a chapter, often ending with a cliff-hanger, as if the reader were cut off mid-sentence. Major events are initially bountiful, as murder follows murder, vampire follows vampire, and unrequited love follows unrequited love. This gives the opening episodes a somewhat compressed feel, akin to feeling too full after a big meal. The episodes feel sluggish and progress fitfully, trying to cram too much into too small a space. Once the series settles down, the episodes become more leisurely and big events are spread more evenly, making for a more satisfying viewing experience.

I haven't read the books, though I am very tempted to check them out, but from what I know of them, it seems that Alan Ball has made just enough changes to the source material without deviating too far from its central narrative. The Sookie Stackhouse novels are narrated in the first person by Sookie, so we only get her perspective on what is going on in the town. Ball and his team have moved away from that, instead giving us an omniscient view of the town that allows for us to follow the lives of the more peripheral characters and for the writers to expand upon the lives and goings on of the main characters. When not focused on the murderer, the show treats us to insights into the life of Lafayette and his various side-projects, one of which makes for a plot strand in the final episodes of the season that was an absolute highlight for me but which I will not ruin, as well as a look at Tara's homelife, and the investigations of dogged but disrespected detective Andy Bellefleur (Chris Bauer). The world of Bon Temps is a surprisingly rich and inviting one, one that keeps the interest even when, as I've said, the series does not choose to dwell upon the murderer and his actions.

I said earlier that True Blood lacks the complexity of Six Feet Under, a claim that I stand by, but that is not to say that it lacks complexity. As with the rest of Alan Ball's work there are a number of undercurrents to the show that deal with themes of (un)death, identity, family, religion and sexuality. These last two points are particularly important, since one of the key metaphors upon which the series is based is the idea of vampires as a stand-in for the gay and lesbian community. Ball has played down this aspect in interviews, but the signs are too strong to ignore; the demonisation of the religious right, whose claims about vampires corrupting the youth could easily be about homosexuality; the ongoing struggle for Vampire Rights; even the credits sequence features a bill-board with the phrase ''GOD HATES FANGS''.

The first season is by no means perfect; thanks to its novelistic pacing the first two or three episodes take a little too long to set a consistent tone and get into the business of opening up the Bon Temps community and expanding upon the lives of the supporting characters. However, once the series finds its footing, in episode 4 or thereabouts, it really gels together and, a few silly extra plot dalliances aside, it doesn't let up until the end of the series, the last three episodes of which are absolutely stunning.

True Blood airs on FX in the UK from Friday 17th July, then on Channel 4 later in the year.