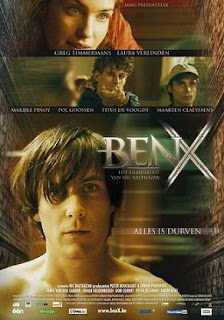 Computer games seem to be mostly used in the media a cheap scapegoat for serious issues, whether it’s Jack Thompson blaming every case of adolescent violence on Grand Theft Auto, or films such as Gus van Sant’s “Elephant” providing an otherwise deep film with paper thin motivations for the protagonists. "Ben X" shows them in a completely different light, one which shows the wish fulfilment fantasies of the video game world as a form of comfort, rather than corruption.

The titular Ben X is the Avatar of gifted teenager Ben (Greg Timmermans), in an online role playing game called Arch Lord. In the game world he is a level 80 warrior which, as he notes in the opening narration, is the most powerful and respected level there is. In his actual reality, Ben suffers from a type of Autism known as Asperger’s Syndrome, which causes him to have a great deal of difficulty in communicating with the outside world. It is because of this, that he is relentlessly bullied at school by all but a few sympathetic class mates. At home, his mother (Marjike Pinoy) does her best to comfort him, and stand by him throughout, but the level of aggression Ben faces in his daily life is something that even she cannot overcome. With Archlord as the only means of communication he feels confident to use, it becomes a hugely integral part of his life- even blurring his perspective of the real world.

The film is a fascinating insight into life with such a condition and the difficulties, not only of bearing it yourself, but for those trying to help. Documentary style footage is interspersed throughout the movie, where classmates, teachers and family provide retrospective commentary, with hindsight providing the only means they have to understand the situation or even realise how they could have intervened.. Rather than confusing the narrative, or overly simplifying it, it does what the technique should do and simply adds to the intensity of the story.

The visual flare of director Nic Balthazar shines throughout the movie. The sequences where Ben’s mother tries to tell him not to take the actions of the bullies to heart in the most gentle manner possible are simultaneously heart wrenchingly sad and terrifying, by showing the sequence from both of their perspectives. Another particularly impressive opening sequence where the gearing up of a hero in Arch Lord is mimicked perfectly by Ben getting ready for school. A mouse pointer moves across the bathroom, clicking on a t-shirt, it appears on Ben's body in an instant, much like in an actual role playing game. This kind of wit is applied throughout the film, which makes it an incredibly striking film, despite its low budget.

Timmermans himself puts in an absolutely fantastic performance as Ben, and is completely believable throughout. Also, Desmet and Bogaert (Maarten Claeyssens and Titus De Voogdt) impress as the bullies. You’ll literally hate them every second they’re on screen, but with the roles they were given that's the best possible testament to their performance I can give.

Ben X is a rare sort of film. Not just because it’s a Danish movie from a few years back with limited distribution in the UK, but due to it’s highly stylised take on giving a powerful message about the treatment of those seen as different by a society obsessed by a conformity to a perceived standard of normality. Though its message can often be dealt in a slightly too heavy handed fashion, this is a minor complaint compared to Ben X’s true strengths as a striking, original and moving film.