Transformers: Revenge of the Fallen

Big metal men hit each other. For two and a half hours. 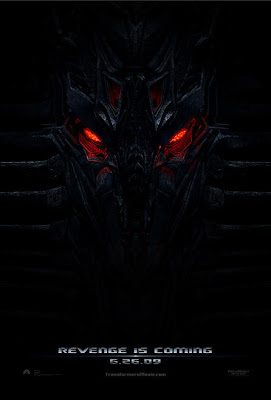 I quite liked the first Transformers film. It was silly, over the top and featured a high rate of characters-to-explosions, which is par for the course with Michael Bay films, but also had some really stunning looking robot effects, albeit ones that you could only appreciate in production stills since they were never still or in frame long enough in the first one to be seen clearly, and it tapped into the sort of nostalgia for my childhood that I usually suppress. All in all, I liked it quite a lot.

Now we come to the second film and all the ingredients from the first are present and correct, but bigger and louder. We've got the robots (but more of them!), we've got the bullshit plot (but more of it!) and we've got the human characters (but more insufferable!). Shia LeBeouf returns as the moronically monikered Sam Witwicky, Megan Fox returns to drape herself over things and run in slow motion whilst displaying the emotional range of a mannequin on ketamine, and John Turturro is back for no real reason other than to show his arse again. This time around The Decepticons are searching for another lost artefact which would allow for their leader, The Fallen, to take his revenge on Earth. For some reason.

Yes, all the ingredients from the first film are present and correct, now in greater amounts. However, just because you can make a massive cake, doesn't mean it'll taste any good, and that is very much the case with Transformers: Revenge of the Fallen.

First off, the effects are, once again, very good. The transforming effects are still terrifically well executed, even though Michael Bay spends a little too much time highlighting them despite the fact that we've all seen them before. As before, though, you can't really see the robots most of the time because of Bay's ADHD editing and inability to keep anything in frame for any length of time. Unless its Megan Fox draping herself over something or running in slow motion. The action sequences, of which there are many, are largely dull and uninvolving affairs since they consist largely of the same sort of thing we saw in the first film, with the possible exception that this time the humans are not quite so useless at fighting against the Decepticons. There are some fights in the film that threaten to match the level of excitement created in the first film, the last 45 minutes of the film are surprisingly tense, but largely it settles into a rut of lifeless fight after lifeless fight.

This is largely because Michael Bay, as is his wont, frames every shot to be a money shot; every shot is bombastic, every shot is melodramatic and ever shot is overblown. Even Rainn Wilson, as Sam's professor, gets a low-angle dramatic panning shot when he is introduced. The problem with imbuing every shot with an equal level of importance is that it renders them equally meaningless and, to paraphrase an old Richard Herring routine, I found myself sitting there reacting in exactly the same way to moments of tragedy as I did to moments of excitement and humour; with the numb, deadened stare of Megan Fox. I just did not care about any of it most of the time and it really did degenerate into a case of things just happening, even the death of Optimus Prime failed to get any sort of response from me since it was presented in exactly the same way as Sam's mom getting high.

I suppose I should talk about the human factor in the film but there doesn't seem to be any point. All the actors are as good as they can be considering they are in a film in which no one, in the audience or in the crew, cares about them or what they do. It's all about the big metal men hitting each other.

I'd be lying if I said that I didn't enjoy bits of it; there were some scenes that made me laugh, and some that were quite tense and exciting, but all in all it was an unimpressive attempt at spectacle that reminded me of Pirates of the Caribbean: Dead Man's Chest; a bloated, overlong follow-up to a perfectly fine first film that begins, ends and leaves absolutely no lasting impression once the credits roll. Cue bad Linkin Park song.
By Edwin Davies
Labels: film review
Newer Post Older Post Home