Pour Elle (Anything For Her)

What is it with French films and fire extinguishers? 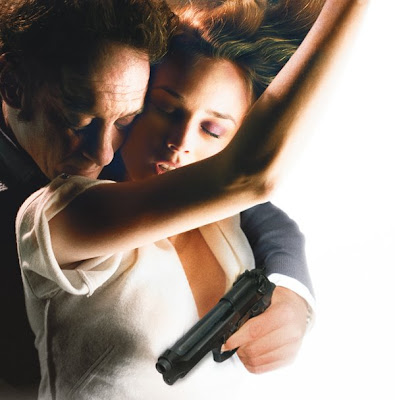 Julien (Vincent Lindon) is a French teacher whose wife (Diane Kruger) is arrested and imprisoned for a crime which she did not commit. After three years of prison visits with his young son and failed appeal attempts, Julien takes matters into his own hands and tries to concoct a means of getting Lisa out of prison.

This film is tense. Very tense. To give a sense of how tense it is, I had already seen the final ten minutes whilst few days before and still I was on the edge of my seat all the way through, even though I knew how the film was going to end. Fred Cavaye constructs the film so well, placing the emphasis on Julien's growing obsession, represented by hundreds of pictures and documents which he sticks to the wall of his bedroom, as well as his decision to sell all the furniture in his home to raise money, rather than on action set-pieces, though he does throw in one with a drug dealer fairly early on to break things up. Julien's status as a normal man with no particular aptitude for violence or crime really sells the enormity of the task ahead of him, and it's very easy to identify with his struggles and setbacks since we know about as much about breaking someone out of jail as he does. It also raises the stakes during the more action-orientated sequences since you know that the last thing Julien wants to do is kill anyone, so there is always a conflict in him even when resorting to murder would be the easiest option.

What really raised the film up, for me, were the performances and the family dynamics. There are some lovely characters moments amidst the tension, ranging from little moments like Julien and his son, Oscar, talking about Oscar's friends at school, or big things like Julien's brother punching a wall in anger after hearing that Lisa's appeal has been rejected, then walking out of the room without saying anything. There's a naturalism to the performances and their interactions that you do not find often in thrillers, and this makes the relationships, be their paternal, fraternal or marital, seem terribly and painfully real and I found myself investing in these characters a lot more than I was expecting.

This investment, more than the plot of itself, was what I really found engaging about the film. I believed in every character in the film and found their motivations and actions had a level of verisimilitude to them that seemed at odds with the expectations raised by the prospect of a thriller. The little moments between a father and a son or a husband and wife are as explosive as a gunshot, and the way in which Cavaye combines the two is remarkable dexterous.

Vincent Lindon is easily the strongest member of the cast, partly because he has the most screentime, but mainly because he is completely convincing as a husband and a father. You really feel his pain and frustration with the system that has taken his wife away from him, and the slightly clumsy and amateurish way he sets about trying to get her back fits the idea of him being someone who is just winging it and trying to figure out how to do something that would be difficult for someone who knows what they are doing. The scenes between Julien, Lisa and Oscar in prison are heartbreaking because there is such a strong sense of familiarity between them, as if they really have known each other for years and are in love. The relationships he has with his brother and father are also well realised, particularly the one with his father, which is shown to be strained and silent and pays off in a big way during one silent exchange of glances two-thirds of the way through the film. The only problem I had with him was the massive bags under his eyes. Anyone that haggard would be picked up at a police checkpoint immediately, regardless of whether they fit any description. He just looks like he has something to hide.

It feels cheap and easy to compare Anything For Her to Tell No-One since they are two recent French thrillers but it is a reasonably good comparison. Both films are pacy, breathless thrillers that have heart and characters that set them apart from the crowd. One of the most engaging, and moving, films I've seen so far this year.
By Edwin Davies
Labels: film review
Newer Post Older Post Home