''When I'm on-stage, I really hope I'm gonna make my dad proud because, if he's watching, that means he cares.'' 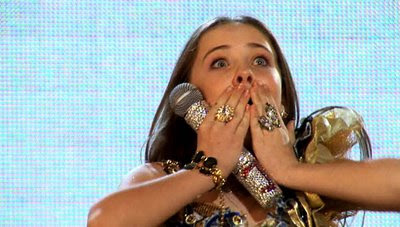 We all know about Eurovision, that bewildering and hypnotic yearly exercise in bright colours, political voting and irony, but what may not be known about (in the U.K., at least) is Junior Eurovision, a contest for under-15s that is a huge phenomenon on the continent.

Filmed over several months, covering both the lead up to the competition and the event itself, Sounds Like Teen Spirit film introduces us to a sampling of the competitors, giving us an insight into their home lives and what it is that has driven them to compete in Junior Eurovision.

From Belgium, with have Trust, a group of talented musicians who specialise in synth-laden pop ballads; from Cyprus comes Giorgos, an angelic young boy who dreams of singing opera; Bulgaria gives us Marina, a Buffy fan who forms part of the group 'Bon-Bon'; and finally, from Georgia, comes Mariam.

Mariam's story is the key emotional point of the film and, for me, is emblematic of what makes the film work so very, very well and why it is ultimately so affecting. The other contestants come from fairly privileged backgrounds; they have private tutors, pools and access to high-quality musical instruments; Mariam lives in a tumble-down tenement building with her mother (who can't afford to travel with her to the competition) and young brother. She has triumphed through sheer ability and she becomes something of a national hero to her fellow Georgians since she will be representing them on an international level, and she truly believes in her responsibilities as a representative of her nation.

It's the lack of cynicism that makes the film so refreshing. All the children involved are so excited about their opportunity, with no shred of calculation of irony in them, that you can't help but be swept along in their wake. Each of them is shown to be just a normal, nice kid that gets to perform in front of millions of people and is having a blast doing it. At the same time, you have the Mariam Factor; each of the kids is dealing with their own personal issues (Giorgos is bullied; Marina's parents are splitting up) so you get an insight into what drives them to succeed that a more superficial documentary might have ignored, and a more cynical documentary might have played up to nauseating effect. Director Jamie Jay Johnson maintains a perfect balance between youthful exuberance and adolescent introspection so that the kids feel real and sympathetic without being either cloyingly precocious or annoyingly self-involved.

They're also incredibly funny and charming individuals. They're all natural entertainers, that much is evident from their performances on stage, and that comes across in their interviews, which consist largely of wide-eyed musings on fame, family and life. These candid, funny moments are what make the more affecting moments so effective since they allow the kids to just be themselves and therein lies their charm. Without that sense of connection between the audience and the kids, the film just wouldn't work on the same level that it does. Without that, the ''Winner Takes It All'' montage (one of the most tense, heartbreaking and elating moments I've seen in a film this year) would seem crass, but instead it is glorious.

The documentary itself is unfussy and unpretentious, letting the kids talk for themselves and drive the story that way. There are attempts to contextualise the competition within the greater history of European conflict, and these are functional but a touch too grandiose for the rest of the film, but that's the one bum note in a perfect composition.

If I were to sum up Sounds Like Teen Spirit in a single word, it would be ''surprising''. Or ''surprisingly''. It's a film which is surprisingly funny, surprisingly touching, surprisingly moving and surprisingly brilliant. It's a film that creeps up on you, to the extent that you feel that you have been tricked into liking it, because, despite whatever misgivings you have about a film about Junior Eurovision, it will win you over in the end. It's an absolute joy to behold and is one of the most enjoyable films I've seen so far this year.