I can't even think of a sub-title. I'm that confounded by the whole thing. 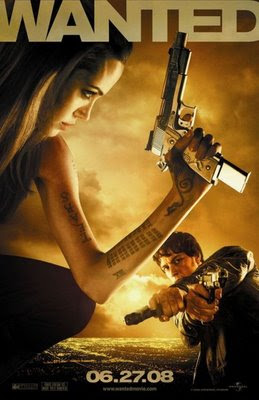 Timur Bekmambetov (ha, got it in one without checking) is often derisively referred to as The Russian Michael Bay. I can't help but think that this is an erroneous analogy, since Michael Bay is nowhere near as interesting and, based on his films, downright insane as Timur Bekmambetov. Bay's films, ludicrous as they are, at least seem acquainted with logic, or to at least have heard of it somewhere, and Bekmambetov's films have no such relationship; they're bullets that curve around the hanging pig of logic and sense, intended to land squarely in the target realm of ''What the fuck?''

And that tortured metaphor brings me to Wanted, which plants its flag squarely in the realm of ''What the fuck?'' very early on, and doesn't leave until it's done. James McAvoy is Wesley, an office worker with literally nothing going for him who is told by a sexy female assassin (Angelina Jolie) that his father, recently shot through the head (and then rewound) by Cross (Thomas Kretschmann), was one of the world's greatest assassins, part of a Fraternity headed by Sloan (Morgan Freeman). Wesley is initiated into The Fraternity, an initiation that seems to revolve almost solely around him getting the shit kicked/stabbed out of him, before being unleashed to hunt down Cross.

Let's get it out of the way: Wanted is a stupid film. A stupid, stupid, stupid film. It's a film in which people can bend bullets, slow down time so much that they can shoot a man from a moving train, and shoot bullets out of the air with other bullets. It throws ludicrous action sequence after ludicrous action sequence at its audience, practically begging them to have an aneurysm from trying to make sense of the sheer madness of it all. Every other minute there seemed to be a moment that had me forcing myself not to pause the film, take a deep breath, then try to figure out what world could allow a film so mindbogglingly dumb to exist. Cars crash into each other, sending one car flying through the air over another car, at which point the person in the car flying through the air, shoots someone else in a car beneath them. That is the level of ludicrousness that the film operates at and I did wonder if Timur Bekmambetov had ever seen a film (or lived on Earth) before he started making them. That level of visual weirdness is just not commensurate with someone who exists on the same plain as everyone else.

As much as I tried to fight it, though, the stupidity of the film, carried along by Bekmambetov's undoubted visual flair, charmed me and I eventually just lay back and let it wash over me in waves of lurid, moronic violence. I mean, there's just something so surreal and appealing about someone smashing a keyboard across their best friend's face and the keys breaking off to spell the words ''FUCK YOU'' flying through the air.

The cast didn't hurt, either. As well as the above named players, all of whom I like, it's also got Common and Terence Stamp in supporting roles, and the main cast do certainly do their best with what is a really awful script. Just look at Morgan Freeman's face when he has to spout some of Sloan's excruciating philosophies; he clearly realises that what he is saying is nonsense, but he's really giving it his all.

It's trash but at least it knows that it's trash and has no pretenses to anything else (apart from the sub-Fight Club voiceover about the inanity of office life, but that's just a vestige from the awful, AWFUL comic book that it's adapted from, which it at least has the good sense to move away from for the most part). It is a piece of crap that's a so monumentally stupid and weird that I couldn't help but like it.