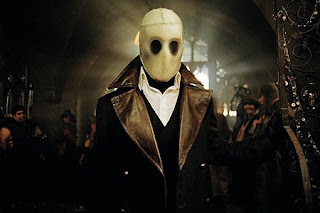 What do you mean, the Watchmen isn’t out for another week?

I've been very busy lately. One element of my new-found busy lifestyle is that I'm unable to visit the cinema as often as I’d like. Even so, I’ve had a bad run with films of late (last film seen: The Spirit), with frequent disappointments. So it is with great pleasure I attended Franklyn.

For those who’ve seen the trailer, you’ve got the wrong idea. Franklyn is not a film that can sit between V for Vendetta and the Matrix on your DVD shelf- the action sequences are impressive, but are also infrequent and short. Instead, you have a film more akin to films such as The Prestige, The Fountain or the writing of Phillip K Dick, following characters rather than action sequences. I thought that needed clearing up now, as several people walked out of the screening I went to, complaining (in the style of League of Gentlemen) about the lack of “killings”.

Three paragraphs in, the proper review begins. The film itself follows four stories- a caretaker looking for his son (Esser, played by Bernard Hill), a man jilted at the altar by his wife to be (Milo, played by Sam Riley), an art student obsessed with suicide (Emilia, played by Eva Green) and, here’s the jarring one, a lone revolutionary in a Steampunk world of Meanwhile City hunting a cult leader (Preest, played by Ryan Philippe). The stories are held together thematically rather than anything else and it takes a while to get used to the jarring jumps between them. This is the primary weakness of the film, as the first twenty minutes left me thinking “seriously, how does this all fit together?” which is probably what director Gerald McMorrow was aiming for. I’m not certain whether I’d gotten used to it, or the segues between the stories improve after this, but it does leave you wondering whether the film is actually good or not at the start. Something that is understandable given that Ryan Philippe plays one of the central characters.

Which leads me on neatly to discuss Jonathon Preest (Philippe), Franklyn’s equivalent of Watchmen’s Rorschash. I was under the impression that Philippe was a perfectly awful American teen movie actor, but here he puts in an outstanding performance rampaging and snarling his way across Meanwhile City with a genuine sense of menace. There is also a very dark and subtle humour to the script that he handles brilliantly, such as an observation about washing machine safety that instantly sums up and mocks the thousands of new religions emerging to the hope starved populous.

Sam Riley, Eva Green and Bernard Hill play the other lead characters with a great sense of believability, but their characters never attain the same levels of charisma as Preest. Riley does stand out though amongst these as jilted Milo, his performance manages to perfectly sum up a sense of loss, without dragging it into melodramatic melancholy as many lesser actors would have.

Complimenting the performances is a mixed bag of cinematography. Meanwhile City couldn’t look any more impressive, even with ten times the budget. Everything about it works, even with its exaggerated stylised visuals. Some of the architecture is just stunning, as are the costumes for Preest and the sinister Clerics (sporting top hats and bomber goggles, it literally doesn’t get any cooler than that!). The sections in London let the film down visually, which is strange given how much easier one would imagine it to be to film there. The style and flair of Meanwhile City are nowhere to be seen, though the close camera work helps give the sense of the claustrophobia protagonists’ lives.

Franklyn seems to have divided critics more than any other film I’ve seen in recent years. I fell on the impressed side of the partition, and felt that it was genuinely original. There are a multitude of flaws (Eva Green’s art project is a little bit cringe worthy), but none of them are big enough to really hurt what is otherwise a stunning debut from a director who seems to be bringing something new to British cinema. In a country dominated by Guy Ritchie and Richard Curtis, Franklyn is a fresh wind of insanity that will probably alienate as many people as it enchants, but for my money is the one of the best and most interesting Brit flicks since Dead Man’s Shoes.
By Neil
Labels: film review
Newer Post Older Post Home