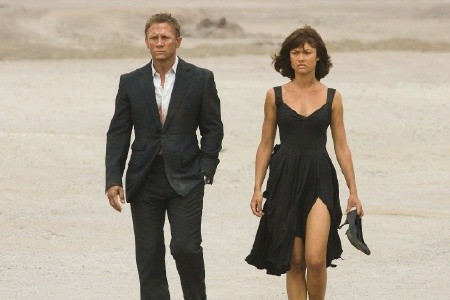 So, you've re-invigorated a franchise that had fallen flat on its arse some years ago as it collapsed under a cloud of camp foolery and invisible fucking cars. You did this by taking the series back to its roots with a gritty, violent aesthetic, casting a leading man who personifies brutality and flawed masculinity, and you made all the punches really hurt. You called this film 'Casino Royale', and the people rejoiced.

Now, you're faced with a conundrum; how to follow such a success, and how to do so without reverting to either the former style that so many people ended up deriding or completely abandoning the individuality of the series and just copying those films with that puppet fellow in. How about awkwardly combining the two and giving it a title that no one remotely likes? Perfect.

So, Quantum of Solace, eh? What's it all about? The plot's never been all that important in Bond films anyway, but here it is in case you care. Starting about an hour after the end of Casino Royale, we find James Bond (Daniel Craig) investigating the mysterious organisation QUANTUM which seems to have been responsible for the death of his love, Vesper Lynn (Eva Green), at the end of Casino Royale. This leads him to Dominc Greene (Mathieu Amalric), who seems to be planning to overthrow the Bolivian government to replace it with a dictator and even I've got bored of this plot summary now.

So, the plot's rubbish but rarely are plots in Bond movies ever worth bothering with. What about the stuff that matters?

Firstly, the action. There's certainly a lot of it, much more so than in Casino Royale, but that's not necessarily a good thing. Director Marc Forster, who up until now has spent his time on small, character driven films, is not someone who is used to handling action sequences and it really shows. A lot of the action films are over-edited and confusing, sacrificing clarity for intensity. A good example of this happens in the opening five minutes of the film. Bond is being pursued by men in a car who shoot at him as they drive along a busy highway. A truck comes up the opposite direction and Bond is forced to move out of the way in a matter of milliseconds. Now, this is just being picky, but that little bit would have been more effective if the audience was aware of the truck more than two seconds before it appeared, creating tension and suspense. In the end, you just get a rapid succession of shots which, whilst exciting and effective, aren't really memorable or interesting. Say what you want about Martin Campbell, the journeyman director of Casino Royale, but he was able to assemble a decent setpiece that was exciting, tense, shocking and emotionally engaging.

And another thing, why is Bond superman again? The thing about Casino Royale that I personally really responded to was the fact that every punch really seemed to hurt Bond. Maybe I'm a terrible sadist or something, but getting the feeling that Bond was suffering really helped me to identify with him as something other than a calm, detached demigod figure and lent an air of realism to the film. In Quantum of Solace, however, Bond is back to getting punched, kicked and blown up without so much as breaking a sweat. At one point, he leaps out of a plane, opens a parachute literally two foot off the ground, then dusts himself off and keeps going. I'm sorry, but that's just stupid.

Now, Bond girls. Here, the film does very well. It casts the staggering gorgeous Olga Kurylenko as Camille, Bond's feisty ally against QUANTUM who is a master (mistress) of subterfuge, fighting and emphatic walking, and it also casts the lovely Gemma Arterton as Agent Fields. Both do their respective roles very well and both are, for fear of sounding a tad shallow, fit as fuck. Kudos.

The supporting cast is also stronger this time around. Returning we have Jeffrey Wright as C.I.A. agent Felix Leiter, this time being put under pressure by corrupt superiors and who winds up helping Bond almost against his will, and Judi Dench is back as M, proving herself to be as icily matriarchal as ever.

The real stand out, though, is Mathieu Amalric as Dominic Greene. Earlier this year, Amalric wowed many, including me, in The Diving Bell and The Butterfly, and I was curious how he would fare in a big budget action film. The answer is 'splendidly'. He makes Dominic Greene out to be a complete bastard of the highest order. Suave and debonair one moment, ruthless and murderous the next. He's a great Bond villain in the vein of Blofeld and Goldfinger but without the crazy base (okay, it's a bit crazy) or legions of henchmen (they're a platoon at best). He doesn't convince as a physical threat to Bond, which is a bit of a problem when they have to fight at the end, but in all other respects he is a great villain and worth the price of admission alone.

Daniel Craig is also worth your time and money since he firmly stamps his imprint on the role of James Bond again, proving that he was indeed the right choice for the part all along. Though the material is weaker, he still convinces as a rough, coarse and unrefined Bond who is just starting to get to grips with the whole spy malarkey. He's a bit smoother and does things that are somewhat more batshit insane this time around, but you still believe in him as a character because he brings such power and physicality to the role.

The script does not help him, though, when it tries to get across his sense of agonising loss over Vesper and the supposed conflict between that and his duty to his country. You never get the sense that such a choice would in fact prove difficult and, with the exception of one scene at the end which mirrors the final scene at the end of The Bourne Supremacy in terms of setting and sense of unease, you don't ever get the sense that such a conflict is going on. The film is too busy rushing from one location to the next and from one set piece to the next for any of emotional, dramatic stuff to actually get a look in, something which is a shame given how central those aspects were to Casino Royale. It's also a bit odd considering it's been directed by someone renowned for their ability to handle characters and internal conflict and co-written by Paul Haggis, a man who has had some considerable success as an intelligent, serious dramatist (if you haven't seen it, check out In The Valley of Elah, a hugely rewarding and under-rated film).

If I was to sum up Quantum of Solace in one word, it would be ''underwhelming'', but you could also use the word ''solid''. It's not bad, despite my griping I did have a good time watching it and felt that it was a pretty entertaining hour and a bit of my life, but it doesn't live up to the promise of its predecessor or the combined abilities of its creators. The action isn't as involving as it was in Casino Royale and the drama isn't as gripping, but at the same time both elements work perfectly fine on their own terms. It retains what worked in the previous film but doesn't manage the same trick and adds in a bunch of stuff from the pre-Craig days that just don't fit any more.