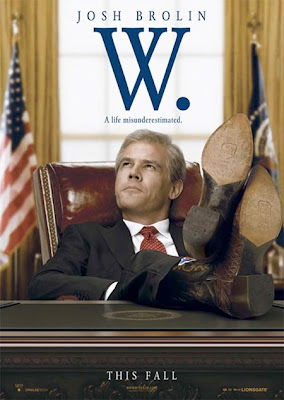 Think of Oliver Stone, what image comes into your head? Creator of counter-myths? Debunker of the official narrative? Agent Provocateur? Insane stylist? All these things are true (I’d just point out that the last one refers to his use of montage and shots, not his ability with a comb) but the one thing that I have never thought when people say ‘Oliver Stone’ is ‘middle of the road’, ‘soft’ or ‘bland’; he either hits terrific heights (Nixon) or astonishing lows (Alexander), never what falls in between. Until now.

Given his credentials as an attacker of conservatives in America, the announcement that Stone would be doing a biopic about the outgoing President of the United States of America filled me with equal parts glee and horror. Glee because the subject matter, including a controversial president, abuse of human rights and civil liberties and shady, backdoor deals shares something with his earlier presidential biopic, Nixon, a film which I’m a big fan of. It seemed that we might get a biting assault on the last eight years of neo-conservative rule or an interesting reassessment of a much maligned figure. Instead what we get is a middling, confused film that fails to take any shots at any potential targets and fails to offer any insight.

The two main problems with the film are that it's not sure what it wants to be and it has no sense of historical perspective. Tonally, it shifts between clever comedy, though it may be just that the Bush administration truly was this farcical, and attempting to psycho-analyse a man who has spent much of the last 8 years being hated and derided. It's to Oliver Stone's credit that he tries to do for Bush (played superbly by Josh Brolin in what would, in a better film, be a career-making performance, but which ends up being one of the few solid supports in a house built on sand) what he did for Nixon; get behind the persona to really get a sense of who the man is and what drives him. Sadly, and this links into the other problem, we don't really know him and Stone clearly doesn't either. He latches onto the obvious, that W. probably feels inferior to his father and his brother, Jeb, but important facets of his life, most notably his decision to become a born again Christian, are not explored, in the end seeming to say that he started hearing God talk to him because he had a really bad hangover. Josh Brolin manages to carry the film through these sorts of moments but he can’t offer any look behind the vacant stare because there’s nothing in the script for the audience to see; it’s far too lightweight to really offer us anything.

The second problem stems from the ‘horror’ I felt when I first heard about the project. Hot on the heels of my initial reaction of “wow, that could be really entertaining”, was a second reaction, “why?”, and the fact of the matter is that after seeing the film I still have no answer to that question. It is really quite pointless making a film like this before Bush has left office because Stone is too close and we are too close to really judge what has happened in anything resembling an objective way. Such a film lacks any sort of the historical context and hindsight that made Nixon such an interesting film and as such you can’t offer a definitive opinion on the man’s policies or the man himself, or even create something that challenges the popular consensus because, even after all he has done, there is still no popular consensus on him or any real idea of what went on behind closed doors. It's like watching a home movie of a holiday you've just got back from, except the last two days of the holiday are inexplicably missing from the end. History has not had time to make its judgment on Bush and his presidency; his wars still rage, his policies still stand and he is still in office

This brings us to another problem: the timeline of the film. It only covers up until 2004, thereby missing out such minor events as the escalation of the war in Iraq, Hurricane Katrina and many, many scandals and abuses of power, yet even within the parameters that are set for the film it only barely mentions the contested 2000 election and the 9/11 attacks. You end up with a film that misses out on all the interesting stuff yet refuses to sink its teeth into what little it has to chew on.

That’s enough of the bad stuff, what’s to like? It’s got a great cast and aside from Brolin, who really is fantastic, you’ve got a truly malevolent performance from erstwhile shark-hunter Richard Dreyfuss as Dick Cheney. One sequence, in which he details the U.S.’s ‘real’ plan for the Middle East, conducted in front of a massive map of the region, is straight out of Dr. Strangelove, except without any of the laughs and about thirty times more batshit insane. Jeffrey Wright is also very good as Colin Powell, coming across as the only remotely human amongst Bush’s cadre of monstrosities. The cast make the most of the script and do make for most of the film’s best moments, though the less said about the usual luminous Thandie Newton’s Condoleeza Rice impression, the better.

Towards the end of the film, George W. Bush is asked a question at a press conference and fails to come up with an answer, instead spluttering and making time until he can think of something to say or the press conference ends. This is the film in a nutshell. It can't provide a definitive answer because there is none, and there won't be for at least a decade or so, when time has passed and we will be able to actually say what the knowns are and what the unknowns are.

In conclusion; it’s a mess, albeit an enjoyable one and you’d be better off renting Nixon on DVD.
By Edwin Davies
Labels: film review
Newer Post Older Post Home