Where did he get that wonderful toy? 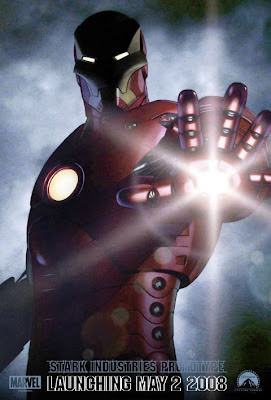 Billionaire playboy Tony Stark (Robert Downey Jr.) is living the high life as the head of Stark Industries, a multi-national corporation involved in a number of industries, though their main interest is in the development and sale of weapons. Whilst on a routine visit to Afghanistan to sell his latest toy to the U.S. Army, Stark is grievously injured and captured by insurgents. With a magnet in his chest preventing shrapnel from reaching his heart, Stark pretends to build a weapon for his captors, but he has more interesting things in mind.

Blockbuster season gets underway with this, the first film to be wholly financed by Marvel's film studios, and it's a very good start to the summer. Robert Downey Jr. is great as Tony Stark and imbues the character with just the right level of charisma, naivety and arrogance, as well as a dry wit, that one would expect someone in Stark's position to have, as well as being able to convey the monumental genius that Stark possesses. Some of his scenes, certainly those involving his attempts to upgrade and improve his suit, are hilarious, suggesting that the erstwhile Chaplin hasn't lost his knack for slapstick, though these moments never feel like a distraction, just a part of the film's enjoyable, heady brew.

However, the most important thing about Downey Jr. is that he is able to carry across the guilt that Stark feels when he realises that his weapons are falling into the wrong hands. Though the film is a little fuzzier on whose hands are the 'right' hands and it is possible for the viewer to get bogged down in a moral quandary regarding how we are supposed to feel about Stark since it raises the question of a man's culpability when he is responsible for the manufacture of weapons but never really offers any resolution. I personally didn't mind this but it's hard to deny that the film wanders into areas that should probably have been avoided, even if they add a somewhat superficial complexity to proceedings.

Regardless, Downey Jr. is a great lead and, considering the film spends most of its time with him, that is very big boon in its favour.

One thing I found particularly interesting about Iron Man is that it takes the standard ingredients of the superhero film (origin story, first experimentation with powers, misconception by the powers that be that he is a menace, climactic showdown etc.) and tries to do something new with them. Director Jon Favreau's statement that the film is ''a kind of independent film-espionage thriller crossbreed; a Robert Altman-directed Superman, with shades of Tom Clancy novels, James Bond films, RoboCop, and Batman Begins'' may be overstating the case a bit, but it's not far off. Like Batman Begins, the film is all about how Tony Stark becomes Iron Man, unlike that film, however, there is no (relatively) quick and easy way for Stark to make this transformation; he doesn't have the parts lying around for him to assemble, he has to start from scratch. As such, apart from the appearance of the Mark I suit half an hour in, the film enters its second hour before we see the fabled red and yellow version. However, at no point during this build-up does the film lag; Favreau keeps the pace up all through, builds up the story and the characters, and makes the creation of the suit the central thread of the film that it needs to be.

Favreau also proves surprisingly adept at the action sequences. They don't quite match the heights of some of the superheroic acrobatics that audiences have become used to in recent years, the shadow of your friendly neighbourhood Spider-Man does hang over proceedings, but they're exciting and he plays to the strengths of the character; brute strength and aerial maneuvres.

Whilst this break with tradition superhero film structure is a large part of what keeps the film interesting, it's also something of a problem for it since, once the suit is constructed, the film loses its way. Without the metaphor of Tony Stark creating a new outer self to match the new inner self he finds after his ordeal, the film finds itself struggling to make the connection with the inevitable final points of the story. It also doesn't help that the villain of the film gets a somewhat hasty creation in comparison to that of its hero, so the finale feels a bit rushed, even if the build-up to it does contain one of the film's best lines.

This could be considered a criticism of the whole film, in fact; Stark and the creation of his suit are so central that a lot of characters only get a brief look in. For example, you have Pepper Potts (Gwyneth Paltrow, awful) who is only barely sketched, as well as frequent references to S.H.I.E.L.D., both of which suggest that they are elements that will have a bigger part to play at a later date. Probably the most obvious example of a character being shunted out is that of Jimmy Rhodes (Terence Howard) who is shown to be Tony Stark's best friend but doesn't really do all that much, he even has a line near the end that pretty much says, ''I'll have more to do in the sequel.''

Because ultimately that is what Iron Man is: the start of a franchise. That's not to say it's a bad start to a franchise (in case it's not clear, I really did love it and thought it was a great film) it just doesn't have the 'oomph' that you might be hoping for as the debut big screen outing for such an iconic figure.

Having said all this, I really, really liked Iron Man. It's fun, it's exciting, it tries something different with a well-established formula and it has a really terrific central performance from Robert Downey Jr. that anchors proceedings nicely. Just tune out Gwynnie and the film's over-reliance on dull rock music and enjoy the ride.
By Edwin Davies
Labels: film review
Newer Post Older Post Home