Indiana Jones and The Kingdom of the Crystal Skull

It's not the years, honey, it's the mileage. 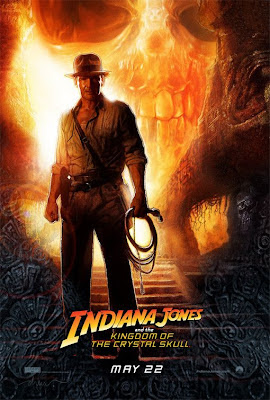 Nineteen years after Henry Jones Jr. rode off into the sunset, we find him still adventuring as he is pulled unceremoniously out of the back of a car, along with his sidekick Mac McHale (Ray Winstone) by some shady Russian types led by Xenia Onatopp. Sorry, Irina Spalko (Cate Blanchett) who are searching for an artifact in a certain warehouse. After escaping their clutches, Indy finds himself teaming up with Mutt Williams (Shia LeBeouf) to track down Professor Oxley (John Hurt), who went missing trying to find the titular skull.

Now, a lot of my criticisms are going to sound a bit fanboyish and I completely own up to this in advance. Not because I think that my love of the previous films impacts upon any ill-conceived notion of impartiality that I may have fostered (though I have none), but because I just want to address the fact that although I am nitpicking somewhat, they are still valid nits to be picked and I might as well raise the issue before anyone else does.

Within the first twenty minutes or so of watching Kingdom of the Crystal Skull, I reached a point at which I realised that this film was ridiculous. Not in the same way that the other films are, i.e. fantastical, but in the sense that it throws believability completely out the window. Scratch that, it locks believability in a fridge, detonates a nuclear bomb over it and sends it flying across the desert. There's nothing wrong with this, of course, and I think that my acceptance of the ridiculousness played a major part in my enjoyment of the film; I'll say right here and now that I liked it very much. However, the Indiana Jones films have always walked a fine line between believability and suspension of belief, so when I see things like Mutt Williams, king of the apes , it's kind of difficult to ignore that and not think ''now that's stupid. I mean, really fucking stupid''.

During all the build-up to the film's release, much has been made of the fact that Lucas, Spielberg and Ford had wanted to make a new Indiana Jones film for years but Lucas hadn't thought of the right story. Something tells me that he should have kept thinking just a bit longer, as the story is utter bollocks, quite disappointing bollocks as well since it confirmed very early on a worry I had about what the plot of the film was going to be. Let's just say that though the Nazis have gone, another of Spielberg's obsessions comes into the film. I mean, it's perfectly in keeping with the period in which the film is set and everything, but it's still not a particularly good story. Even though it could be argued that story is never all that important in these films, it still helps to have something interesting to keep the momentum going, but the story is so convoluted, so vague and so downright uninteresting that it's hard not to pick faults with it, even if it is interspersed with some tremendous action sequences (more on them later).

It also doesn't help that the script isn't particularly good. I've always thought of David Koepp as a really workmanlike screenwriter and whilst he can write scenes and keep things moving, he doesn't quite have the ear for dialogue and language that Lawrence Kasdan does, so while the scenes feature the same sort of expositionary dialogue that the rest of the series has in abundance, it's just not packaged in a particularly fun way. That's not to say that it doesn't have its moments, it really does, particular the surprisingly numerous, but often subtle, references to previous films in the series and the way in which certain scenes are used to mirror how the dynamics of Indy's life has changed, e.g. Mutt smiling at having outwitted two pursuers in a motorcycle chase while Indy looks balefully on, in much the same way as Henry Jones Sr. did in The Last Crusade, and the fact that Indy at one point describes his situation as ''intolerable'' . I know some people don't like referentiality in these films, but I really like moments like these.

This, of course, impacts upon the performers and it is to their credit that most of them do well with what little they are given. Even though their parts are sorely underwritten, John Hurt and Ray Winstone do the best they can, even if the former's role isn't so much underwritten as it is repeated; he's got about 5 lines said over and over and over and over and over throughout the film. It also needs to be said that Winstone, whilst good, is so forgettable that only ten minutes after leaving the cinema I had completely forgotten what the name of his character was. Cate Blanchett is in full-on Natasha Fatale mode, complete with added double-yous and slightly broken syntax. Shia LeBeouf is very likable as Mutt and even though he doesn't get anywhere near enough lines to warrant his role in the film he delivers them with gusto and really seems to be having a ball. Something that can't be said of Harrison Ford.

Don't get me wrong, Ford isn't bad, he just doesn't seem like Indy to me. Everything about his performance feels a bit off; the swagger's not quite there, the attitude is surly rather than roguish, and in general he just seems a bit wrong. This is at least partly the fault of the script which demands Indy to be somewhat melancholic, wistful and saccharine in the first half of the film. As much as I like Harrison Ford, he's not got the range (dahhling) to carry that off and it's only when Karen Allen shows up and really gives him someone to spark off of that we see some of the old Indy come back into him.

The whole film feels a bit off, to be totally truthful. It just doesn't 'feel' like an Indiana Jones movie. There's the obvious things, like the visual style of the film, which I can understand because they wanted it to look like a 50s movie rather than the serials that inspired the original films, and it does look really quite lovely, but there are also little moments of unnecessary exposition that nagged at me throughout. Case in point, at one point Indy says that something that has been written down are directions, so another character shouts ''get a map!'' but we are shown Indy and several other characters looking at a map. I can't help but feel that little moments like this go against the furious pacing of the older films, and there were so many little moments like that that I felt I had to mention them, even if I'm the only one that is bothered by them.

Another bit difference is the CG used frequently throughout the film. I've nothing against CGI whatsoever, I certainly do love films that have lots of CGI in them and which use it well, but that is not the case here. Some of the CGI is really quite poor and detracts from the stuntwork and physical effects that were so trumpeted during the making of the film. It also just feels wrong to have a whole bunch of CGI in an Indiana Jones film; Raiders of The Lost Ark was made as an antidote to the effects-heavy films its creators had spent years making and hearkened back to a more back-to-basics approach in action film making. To have come full circle so that the series ends (possibly) with an effects-heavy installment just doesn't sit right with me. Especially when aspects of it are so badly implemented, with some scenes looking like they were taken straight out of 'The Mummy Returns'.

Comparisons to The Mummy also brings up one of my main gripes about the film; it feels not only derivative of its ancestors, but also of the films that ripped its ancestors off. The whole final half-hour or so has basically been ripped from The Mummy Returns except instead of shitty CGI pygmies you've got a slightly less shitty CGI undead alien thing . It's just a bit sad that the film makers couldn't deliver something a bit different to those films that have so heartily ransacked the tombs of their earlier creations.

But, and this is a big but, that's not what the film is trying to do. It's designed as a piece of popcorn entertainment and, even with its many, many flaws, I still enjoyed it immensely. It's overblown, it's got a nonsensical plot and all the rest but it zips along at a fair pace, has some truly great action scenes, one particular sequence involving three cars, a jungle and a game of pass the parcel is just terrific, and is just good fun. I know I've spent the entire review picking the film apart only to offer a contradictory conclusion, but that's because at the end of the day I can ignore the flaws and just enjoy the film because, hey, it's Indy.

I can't say I'm not a little disappointed, but that's because I was expecting it to be dreadful or great, so settling for pretty good is alright by me.
By Edwin Davies
Labels: film review
Newer Post Older Post Home