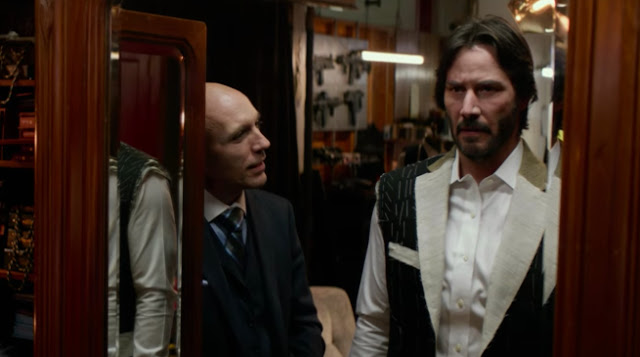 One of the riskier unforced errors a film can make lies in referencing a better movie, since it runs the risk of making the audience think about what they could be watching instead. Chad Stahelski's John Wick: Chapter 2 makes it twice in its first ten minutes.

First, it features a brief glimpse of Buster Keaton's Sherlock, Jr. (specifically the thrilling scene of Keaton nearly being hit by a train while riding a motorcycle) projected against the side of a building during a car chase through the streets of New York in which Wick (Keanu Reeves) pursues a henchmen working for Abram Tarasov (Peter Stormare), the brother of the antagonist from the first movie. Stahelski certainly gets points for boldness, since not only does the scene serve as an introduction to the action, but he also has the sound of the chase sync up with Keaton's film. It's a clever distillation of the remixing and recontextualising of cinematic references that marks both John Wick movies, an ethos which extended to the film's brilliant poster, and it's hard not to admire the chutzpah.

The second, and more illuminating, instance comes when the film references the events of its own illustrious predecessor. As Wick dismantles Abram's entire warehouse full of goons in order to answer the one lingering question from the first John Wick that no one was asking - "But what happened to John's car, though?" - Stormare gives a rundown of what drew our hero out of retirement, as well as establishing that he is a legendary figure within a world of highly skilled assassins. It's a weird mixture of showing and telling, since everything Stormare says is backed up immediately by dynamic, beautifully shot and choreographed stunt work. Instead of underlininghis points, the juxtaposition undermines them since it makes his presence so transparently expositional.

It doesn't help that Stormare is literally only in that scene, reinforcing the idea that the opening ten minutes is just there to set the table for viewers, explaining things that fans of the original already know, but which new viewers don't need vocalised because we're seeing John Wick murder everyone, so they don't need someone else to explain that he's kind of a badass.

The film's obsession with its own mythology trips it up repeatedly as it tries to gain momentum. The plot of John Wick was pretty basic - man loses wife to illness, wife gifts man a puppy as a last act of love, man runs afoul of Eurotrash tosspots who kill puppy, man wipes out roughly 90% of New York's Russian population - but the hints of a broader world of assassins, all of whom abide by a draconian code of honour enforced by Ian McShane, added a bit of flavour and personality to a revenge story that Charles Bronson could easily have starred in once upon a time. The mythology was the salt that spiced up the meal.

In John Wick: Chapter 2, the salt is the meal.

After resolving his vendetta from the first film and vowing to return to a peaceful retirement, Wick is forced to take on a job for Santino D'Antonio (Riccardo Scamarcio), a member of a powerful crime family to whom he owes a blood debt from his former life. Since Wick returned to a life of killing, even though it was brief and for a specific purpose, Santino wants to collect, and employs him to kill Santino's sister Gianna (Claduia Gerini) since she has inherited their father's place on the "High Table", a kind of Board of Trustees for criminals. After being coerced to take the job by the use of extreme force (by way of a burning house and an oddly beautiful visual nod to Gone with the Wind) Wick sets off for Rome, only to discover that his new assignment is just the start of his problems.

For much of Chapter 2's first half, the elegant simplicity that made John Wick such a thrilling surprise is absent. After the exposition of the prologue, the film struggles to justify dragging its protagonist out of retirement once again, and continues to reiterate details from the first movie. While it's fun seeing actors like John Leguizamo and Lance Reddick return, Derek Kolstad's script strains to set all the necessary wheels in motion because so much of the story hinges on consequences from the previous film, as well as explaining entirely new concepts - like the aforementioned blood oath - which are not tackled in especially dynamic fashion.

It's reminiscent of the awkward shift that occurred between the first and second Raid movies; while the second films are undoubtedly better made and exhibit a greater confidence and zeal on the part of their directors, they fumble the transition from a simple, direct storyline to a convoluted and self-consciously epic one.

When the film stops rehashing old plot points and instead deepens its mythology by introducing new concepts and characters, it's wonderful, particularly since some of the sillier aspects are tackled with a  sense of wry detachment. The two most exciting additions in this vein are The Sommelier, a gun merchant whose every transaction is conducted like a waiter helping a customer choose a nice red (played with silky-voiced decorum by the always welcome Peter Serafinowicz), and the Bowery King (Laurence Fishburne), an avuncular Welles-ian figure who runs a vast ring of homeless hitmen who operate throughout New York. Fishburne fits perfectly into the world of John Wick since he brings that distinct blend of charisma and gravitas needed to sell a character as fundamentally ridiculous as "Fagin, but with guns", yet beneath the charm is a steely resolve and cunning which makes his brief interactions with Wick fraught with possibility and intrigue.

His appearance also coincides with the beginning of the film's breathless, exhilarating second half, in which a contract is put out on Wick and he has to navigate the streets of New York while constantly being assaulted by a diverse and talented group of highly-motivated assassins. Watching Reeves shrug off attackers like a commuter dodging panhandlers is immensely satisfying, showcasing as it does both the actor's physical prowess and Stahelski's ability to find new and exciting ways for people to get shot in the head. More importantly, it's during the second half that the film rediscovers the clarity of narrative and purpose that the first half lacks; someone has wronged John Wick, he is going to plow through absolutely anyone who gets in his way until he has exacted his revenge. It still operates within a framework that is elaborate and bizarre, but it's one that has stakes that are easily grasped and appreciated, if not necessarily felt.

That final hour also lays the groundwork for a potential (and, given Chapter 2's success, inevitable) third installment which promises to be both more off the wall yet direct than the second. It's a testament to John Wick: Chapter 2 that, despite a shaky start and a tendency to dwell over its own storytelling, I came out of the film hungry for more. Even when it feels like it's dragging its feet, the film is never boring, thanks to its murderers' row of great character actors and action choreography that cannot be beat. Maybe the film will look better in a few years once the series is three or four movies deep, when the yeoman's work it has done fleshing out the world and getting John Wick firmly back into the killing business will bear fruit. At the moment, it's an at times frustrating, at times brilliant addition to the modern action canon.