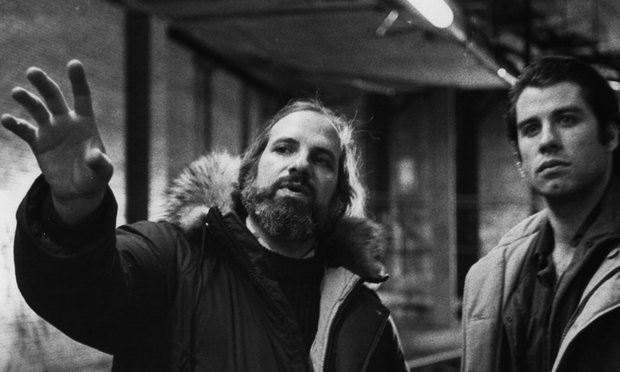 Documentaries about directors are relatively rare considering how often filmmakers like to talk about their craft, and good ones are even harder to find. That's partly because even the great directors run out of good production stories eventually - sure, Jaws and Raiders of the Lost Ark were fraught with disaster, but how many people really want to hear about the production of Always or The Terminal? But it's also because the subjects often want to present their work in a positive light, either due to nebulous concerns about their legacy, or because they are afraid that excess honesty might burn bridges and make it harder for them to work. That kind of mild self-censorship might be prudent, but it can get in the way of genuine insight.

Neither concern proves to be an obstacle for De Palma, Noah Baumbach and Jake Paltrow's terrific documentary about the life and work of Brian De Palma, the writer-director who made some of the most indelible, and divisive, thrillers of the last fifty years. His controlling, combative demeanour means that he has a seemingly endless supply of stories rife with conflict and invention, while his decision to leave Hollywood following the failure of Mission to Mars in 2000 means that he basically has no bridges to burn. Considering that he's spent much of the twenty-first century struggling to make movies by cobbling together financing in different countries, saying that Robert De Niro didn't learn his lines in The Untouchables or that Robert Towne was difficult to work with probably isn't going to make things that much more harder for him.

Structured similarly to Errol Morris' The Fog of War, albeit with less antagonistic interviewers, De Palma takes the form of one long interview, broken up with pertinent clips, in which De Palma recounts a more or less chronological history of his career, with some biographical details - an opening preamble about seeing Vertigo for the first time - and film theory - a discussion about Vertigo being a metaphor for the act of directing - thrown in for good measure. Despite his reputation as an outsider who never felt comfortable in the Hollywood system, even (or perhaps especially) when he found success there, he has the easygoing, convivial tone of a consummate professional. (Not everyone gets to casually refer to Bernard Herrmann as "Benny", after all.) He quickly emerges as a lively, compelling storyteller whose willingness to explore both the technical details behind his choices and the more ephemeral moments of inspiration hint at why he was able to work in Hollywood for so long, even though he really seems to hate it.

He sounds every bit like the old school studio directors whose work he grew up admiring, even if his career path - making avant garde movies in New York before breaking into the studio system alongside the likes of Coppola, Scorsese and Friedkin in the '70s - couldn't have been more different than theirs. That tension, between his status (both real and embellished) as an outsider and his considerable success, fuels many of the stories De Palma tells. Even the beloved movies, such as Carrie, Scarface and The Untouchables, come laden with tales of studio meddling, stars being rushed to the hospital after a stunt gone awry, or intramural tension between De Palma and his actors/writers/producers/everyone. Most film shoots tend to be chaotic at the best of times, and De Palma's repeated, emphatic honesty on this point serves as a bracing tonic to modern day studio efforts to make the process seem more sanitised and straightforward than it usually is.

De Palma's candour, even about the shoots that went well, and the willingness of Baumbach and Paltrow to raise potentially difficult subjects, prove to be the distinguishing features of the documentary. One moment of decidedly undiplomatic honesty comes when discussing Carrie and, in addition to talking about how little faith United Artists had in the film compared to their more prestigious releases that year, such as the original Rocky, De Palma seems to take genuine pleasure in talking about the failures of its subsequent sequels, remakes and adaptations. He also doesn't pretend to understand why Scarface proved to be one of his most enduring and iconic movies, or even to think particularly highly of it, which is refreshing.

Although it's reverential towards De Palma's work and his skills as a truly cinematic thinker, with special attention paid to his ability to craft indelible images and sequences in everything from Blow Out and Body Double to Mission: Impossible and Snake Eyes, it doesn't sugarcoat the criticisms about his work being excessively violent or misogynistic. It doesn't do much to refute them, either, but given the format it's hard to see how it could. De Palma is allowed to offer up his defense - that he makes the kind of movies he wants to make and that he doesn't believe there's an underlying hatred to his art - before moving on to other subjects. It's not a particularly strong or satisfying defense, either for fans or detractors, but given how profoundly polarising De Palma is, it's hard to see what response could be satisfying.

Considering the length and breadth of his oeuvre, some films get much more attention than others. More time is spent discussing how the Union Station shootout in The Untouchables had to be improvised because David Mamet refused to write a new ending than is spent on Wise Guys or The Black Dahlia, for example. That's probably more of an issue for De Palma obsessives who would prefer a deeper dive into the outliers and oddities, but it's hardly a deal breaker. The films that left a larger dent on the culture did so for a reason, so they deserve more weight in any discussion of De Palma's career. If nothing else, the brevity with which Baumbach and Paltrow deal with the lesser-known films ensures that De Palma moves at a brisk pace.

As with other recent film docs like Jodorowsky's Dune and Lost Soul, there is a nagging sense that De Palma is a DVD extra that escaped that particular purgatory thanks to the fame of its participants. There's not much of a defense against that claim, other than that it's a really, really good DVD extra, and the intelligence on display from both its subject and its directors mark it as essential viewing for De Palma fans, but also for younger or casual cinephiles. Thanks to his more sporadic output over the last sixteen years, much of which has been indifferently received, De Palma's been sidelined compared to some of his contemporaries, and he ruefully admits in the film that his best work is probably behind him, while the films he made in the '70s, '80s and '90s will ultimately define his place in film history. De Palma is a great primer on how thrilling and vital many of those films remain.