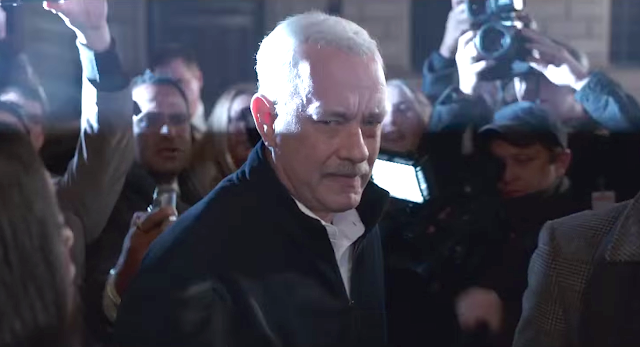 As a recreation of an historical event and the man at its centre, Clint Eastwood's Sully is perfectly molded to its subject matter. It's a workmanlike, professional exercise in storytelling that is upended by a single event; the fateful day in January, 2009 when the engine of Chesley "Sully" Sullenberger's (Tom Hanks) plane was taken out by a bird strike, requiring him to make an emergency landing on the Hudson River, which he achieved without losing any of the one hundred and fifty-five lives on board.

Since the vast of majority of the audience will know how the "Miracle on the Hudson" went down - things tend not to be called "miracles" if they end horribly - the meat of the story comes from the subsequent investigation into the landing, and the effort to determine whether or not Sully's actions were warranted. Could he and his co-pilot, Jeff Skiles (Aaron Eckhart, sporting the finest soup strainer this side of latter-day Kurt Russell), have made it to an airport and landed safely? Did they needlessly endanger the lives of everyone on board with a maneuver that, statistically, was much more likely to end in disaster than success?

Again, there isn't much mystery or suspense in how that story turned out because the real Sully remains a national hero, but Eastwood ably handles the steps that lead to that eventual outcome. There's a measured, level-headed quality to his storytelling that suits a story about people - whether it's Sully, the passengers and crew of US Airways Flight 1549, or the emergency services personal who came to their rescue - who remained calm and composed when faced with a shocking disruption in an otherwise normal day. There isn't really a villain in the movie. The National Transportation Safety Board are the antagonists because they question every detail of Sully's story, but they, like everyone else in the film, are just doing what their job requires of them. There isn't much drama in a story of well-meaning people at crossed purposes, and Eastwood doesn't try to force any from Todd Komarnicki's script. It displays admirable restraint, even if it results in a film which is too subdued for its own good for seventy of its ninety-six minutes.

Since so many scenes involve passive-aggressive discussions of flight data wrapped up in technical jargon, that distance, verging on coldness, could be overwhelming without the warmth that comes from the performers. Tom Hanks, confirming his place as America's Dad (as opposed to Eastwood, America's Uncle Whose Posts They Hide on Facebook) is at his most stoic and troubled playing a man who thinks he did the right thing, but is plagued by doubt and uncertainty. There are numerous recreations of the landing sprinkled throughout the film, but we also see Sully imagine what could have happened if he hadn't made the split-second decisions that he did: Instead of landing on the water, maybe they would have crashed into a building in Manhattan, causing widespread destruction. (It's to the credit of Eastwood and his regular cinematographer, Tom Stern, that images of a jet liner crashing in New York somehow don't recall 9/11, in part because there's such an obvious falseness to them.)

There isn't much inherent drama to the character of Sully - there's some tension with his wife, played by Laura Linney in a thankless role, but the conflict there is over him being too noble - because he's presented as a decent man who did his job to the best of his abilities, and is now squirming under the national spotlight. The role doesn't tax Hanks' skill set - there's not much in it to rival his work in Captain Phillips, for example - but he does bring lots of warmth and humanity to a character who could easily have been little more than a cypher for generic heroism.

Hanks' greatest contribution may be as the lynchpin of the film's central misdirection. Although the title and the casting of a prominent actor in the role make it seem like the film is going to be a biopic of Sully - an idea supported by some largely superfluous flashbacks of other times Sully flew planes - when it gets to the water landing, its scope broadens. Instead of focusing solely on the technical details of the crash and what was going on in the cockpit, the film takes time to offer brief snapshots of the other people on board: the father and son who got transferred from another flight at the last minute; the mother and daughter who bicker over what souvenir to buy; the new mother playing with her baby.

In both the summation of the trial, when Sully pays homage to everyone who helped save lives when the plane went down, including the people whose lives were in the process of being saved, and in its willingness to offer glimpses of anonymous passengers, Sully emerges not as the tale of rugged individualism suggested by both the title and the director, but of enveloping humanism. It's an unfussy story about unremarkable people who, when faced with disaster, rose to be something greater. It's quietly moving and unassuming, which feels appropriate, even if it's not especially exhilarating.