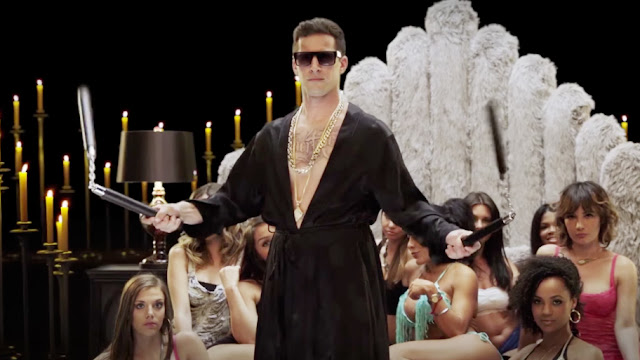 In creating a mockumentary about the rise and fall (then rise) of a vainglorious pop superstar, The Lonely Island (a.k.a. Saturday Night Live alumni Andy Samberg, Akiva Schaffer and Jorma Taccone) set themselves a dauntingly high bar. By making a faux-documentary set in the world of popular music and all the ridiculousness that comes along with it, they invite comparisons with This Is Spinal Tap, a beloved cult classic whose influence on the mockumentary format continues to this day. It takes an admirable confidence to want to be compared to the very best, but it also invites a level of scrutiny that goofy comedies usually try to avoid.

More worryingly, in taking on the world of pop music and celebrity excess, they have to try and find a way of exaggerating and heightening something which is already exaggerated and heightened. Spinal Tap had the advantage of being set in a world that was familiar enough to be recognisable, but niche enough that the jokes felt fresh and original. If you make a film satirizing some of the most famous and documented people in world - people who have lampooned their own personas already - it's hard to find a fresh, original take because everyone already knows about the crazier aspects of pop music. Saying that Justin Bieber is a ridiculous public figure in 2016 is about as edgy as making jokes about airline food (or using "jokes about airline food" as an example of hacky comedy, for that matter).

It's to The Lonely Island's credit that they are not overly concerned with making something wholly original, or in sticking to one specific person for inspiration. Their main concern is making the funniest version of familiar material. In that respect they are wildly successful, because Popstar: Never Stop Never Stopping is hilarious, and one of the most consistently entertaining American comedies in years.

After a quick rundown of the life of Conner4Real (Samberg), a one-time member of the boyband The Style Boyz who broke out and became a Timberlake-like solo star with his debut album Thriller, Also, Popstar picks up just as Conner is about to release his obviously terrible follow-up Connquest. As he tours the album with up and coming underground rapper Hunter The Hungry (a Tyler, the Creator facsimile played with unpredictable malevolence by Chris Redd), Conner is gradually forced to confront the mistakes he has made, particularly the rift with his childhood friend Lawrence (Schaffer) which led to the dissolution of The Style Boyz. Though not before defecating in the Anne Frank House, proposing to his girlfriend (Imogen Poots) using wolves, and accidentally convincing the world that he has no penis.

Befitting a team who used their Digital Shorts to become Saturday Night Live's very own Freed Unit, Popstar more often than not feels like a collection of sketches rather than a cohesive story. Conner discovering humility and reconciling with Lawrence - and learning to appreciate the third Style Boy, Owen (Taccone), who theoretically serves as Conner's DJ but in reality just plays backing music from an iPod - forms the backbone of the story, and makes for a few moments of genuine sentiment in the third act. Yet most of the running time is taken up with talking head interviews with a host of luminaries including Questlove, A$AP Rocky, Nas, Simon Cowell, and Mariah Carey; behind-the-scenes moments from the tour; and scenes set in a TMZ-like newsroom in which Will Arnett, Chelsea Peretti, Eric Andre and Mike Birbiglia comment on the action and contemplate the emptiness of sleazy tabloid journalism.

These different strands vary in quality - some of the talking heads are funny, but for the most part they serve the more pragmatic need to fill in backstory and lend verisimilitude to proceedings - but they are indicative of the film's commitment to delivering as many jokes as possible in the shortest amount of time. The script, written by Samberg, Schaffer and Taccone (Schaffer and Taccone also direct), is densely packed with gag after gag after gag, and while not every one hits, you can be pretty confident that one that will is just around the corner. It's a scattershot approach that diffuses the potential for incisive satire and makes story a secondary (and sometimes tertiary) concern, but it's one the team get away with because so many of the jokes work.

Whether it's a big set piece like the aforementioned wedding proposal (which goes about as well as you'd expect an event featuring live wolves to go) or a sly comment on actual star excess, such as Conner surrounding himself with yes men and hiring someone slightly shorter than him to make him appear tall in pictures, there is a sense that every joke has been considered and crafted, as opposed to ad-libbed until something funny happened. (The complexity of the production's concert scenes and the globetrotting plot may explain such rare focus in a Judd Apatow production.)

It helps that they've assembled a murderers row of comedic performers to bring those jokes to life. In addition to the many celebrities playing themselves, Sarah Silverman and Tim Meadows fill out Conner's entourage as his supportive/enabling publicist and his opportunistic manager, respectively, while regular collaborators like Bill Hader, Maya Rudolph, and Justin Timberlake show up every now and again to add some weirdness (such as Hader's guitar tech being a fan of "flatlining", as seen in the movie Flatliners) to proceedings.

The presence of so many familiar faces attains an extra-textual quality in a story that is, at its core, about friendship and the importance of surrounding yourself with people who love you, as opposed to people who are just along for the ride. That potentially trite idea has much more resonance coming from three guys who have been friends since they were teenagers, populated by people whose company they genuinely enjoy. There is a core of sweetness to that idea which makes the occasional feints towards sentiment feel more earned than they might otherwise.

Unsurprisingly, considering the trio's past work, some of Popstar's best moments come in the form of its original songs. The sharpest satirical jab comes in the form of 'Equal Rights', a duet with Pink which finds Conner protesting the illegality of same sex marriage (long after it had been made legal) while also forcefully and repeatedly asserting his heterosexuality. A pitch perfect parody of Macklemore and Ryan Lewis' 'Same Love', which also preached acceptance of all sexual orientations while all but saying "but I'm totally not gay, I can't stress that enough" it's The Lonely Island at their best: a perfect approximation of the look and sound of bad mainstream hip-hop, combined with lyrics that skewer their target while also being catchy as hell. It's the standout from a strong soundtrack which also includes songs that attack the Mona Lisa for being overrated, use the death of Osama Bin Laden as a confusing metaphor for sex, and turn a string of non-sensical catchphrases ("Patrick Stewart Money" "Balancing my checkpoint" "Sleepy Benjamin Franklin") into a summer jam.

Though it formally resembles Spinal Tap, a better point of comparison for Popstar might be Jake Kasdan's Walk Hard (and not merely because they were both produced by Judd Apatow and feature a lengthy scene in which a penis hangs in the background). Both are good at spoofing their targets, but are better as absurd joke delivery systems. As a take on celebrity culture and pop superstardom, it's pretty much redundant because its inspirations are so far beyond parody, but it's also very, very funny, and certain to reward repeat viewings as it follows past Lonely Island-related projects like Hot Rod and MacGruber and becomes a cult favourite, even as mainstream success eludes it.