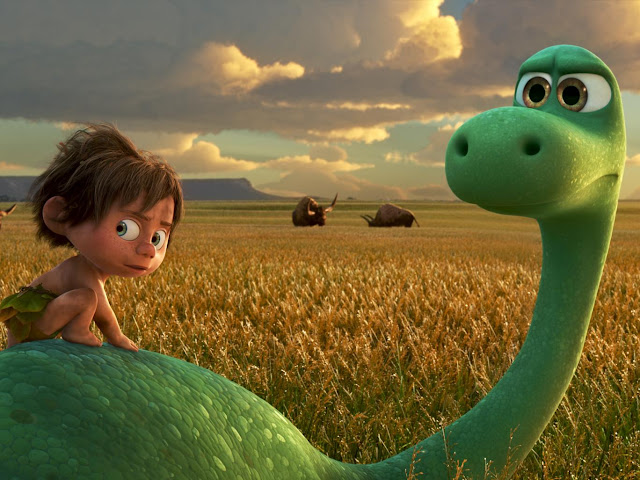 The best Pixar films take a fairly simple idea, then build emotional complexity onto their basic premise. To use the most famous example, Toy Story asks "What if toys came to life when no one was around?" and turns it into a funny and sad musing on aging. The worst Pixar films get lost in the details of their premise, with the most obvious examples being the two Cars movies, both of which suffocate straightforward stories in worlds that take a lot of time and energy to explain, yet still come off as off-putting and weird.

The studio's latest feature, The Good Dinosaur, splits the difference between the two extremes. The central idea is pretty standard Pixar fare: a naive central character - in this case a young Apatosaurus named Arlo, voiced by Raymond Ochoa - gets taken out of a sheltered environment, is forced to fend for himself, and encounters a variety of strange characters who help or hinder him on his quest. It's a premise that has worked for everything from Finding Nemo to last summer's Inside Out, and it's a solid base upon which to layer complexity or poignancy.

Where The Good Dinosaur start to come unstuck is in the details of its broader world. Not only is it a world of talking dinosaurs, a concept that worked pretty well with The Land Before Time, but it's also one in which the asteroid that made them extinct in real life missed, allowing them to establish an agrarian society of farmers, ranchers and rustlers. It's one thing to anthropomorphise dinosaurs, it's another thing to then place those dinosaurs into what is essentially a Western about farmers trying to get enough crops together for the winter. That added layer of complication takes the concept from diverting to distracting, and it takes the film a long time to overcome its plough-heavy first movement.

Tellingly, the film starts to feel more surefooted once the action moves away from the farm. As part of a quest to prove himself as a worthy member of the family, Arlo is put in charge of catching a human child who has been stealing corn from the farm's silo by his father (Jeffrey Wright), but his failure in this task has tragic results. When he tries to atone for his mistake by pursuing the human, he gets washed away during a storm and has to figure out how to find his way home. In order to survive, he has to work with the human, who he names Spot, and the two bond over the minutiae of finding food and escaping predators.

Arlo and Spot's journey is pretty much classic Pixar. The two are initially at odds, they grow to trust and respect each other, and there are moments of wonder and sadness sprinkled throughout their desperate (but not too desperate) struggle for survival. The two strongest scenes, one in which our heroes marvel at fireflies and another in which they use sticks and mud to tell their respective life stories, are beautifully realised moments of visual storytelling which show off how gorgeous the animation is. Director Peter Sohn and his team have crafted an almost photorealistic world which looks utterly magnificent throughout, even if there is a near-constant dissonance between the overtly cartoony designs of the characters and the uncannily realistic world through which they're traveling. The environments of The Good Dinosaur can be placed alongside Sully's fur in Monsters Inc and the water in Finding Nemo as milestones in Pixar's history of technical innovation.

As great as it looks, the story never quite coalesces into anything worthy of the data expended in telling it. Surrounding the moments of visual splendour are dashes of wacky comedy, some of which work, but some of which sit uncomfortably alongside scenes of wrenching sadness or genuine terror as Arlo and Spot are pursued and menaced by a group of pterodactyls who are gripped by religious fervour. An encounter with a paranoid Styracosaurus is appealingly weird, while a brief detour into psychedelia is just plain odd, and it's almost worth watching the film just to hear Sam Elliott, voicing a cowboy T-Rex, tell a story about drowning a crocodile in his own blood.

It's a stark and strange moment that ultimately delivers an important lesson to Arlo, but it's also a jarring moment from a studio who have always managed to shift between different tones with ease. Yet that particular scene does get to the curious charm of the film, which is that while it never quite comes into focus as a whole, it's composed of so many strange choices that it's impossible to dismiss entirely. So many animated films coming out of Hollywood in recent years have been bland and tasteless that a film as odd as this one, even if misses more than it hits, is at least distinctive and interesting.

That may stem in part from the film's troubled production, which saw it switch directors, replace most of its voice cast and get pushed back by more than a year, but Pixar are no strangers to difficult productions. All three Toy Story films were essentially scrapped and rebuilt at one point in their genesis, as was Ratatouille, but all of them wound up being critically acclaimed, wildly successful, and broadly accepted by audiences. The Good Dinosaur, meanwhile, received middling reviews (including this one), became the first Pixar film to ever lose money at the box office, and has yet to build a notable fanbase.

The key difference between those earlier films and this one is that the central ideas were solid enough to weather all the changes. Characters could be redesigned, stories could be completely scrapped, and key creative personnel could be removed at a fairly late stage, but they always had a strong concept upon which to build the new version of the film. The Good Dinosaur, despite its many technical virtues and the moments when its story works, doesn't have a particularly solid foundation, so all the abrupt tonal shifts and disparate visual styles don't have anything to hold them together. Its world is too strange to explain easily, or to leave unexplained and hope that the audience will pick it up as they go, while Arlo's journey feels too much like past Pixar films, not to mention dozens of other animated films that focus on lost characters working together to get home. It's not the worst Pixar film by any stretch of the imagination, but it may be the least able to make a compelling case for why its story needed to be told.