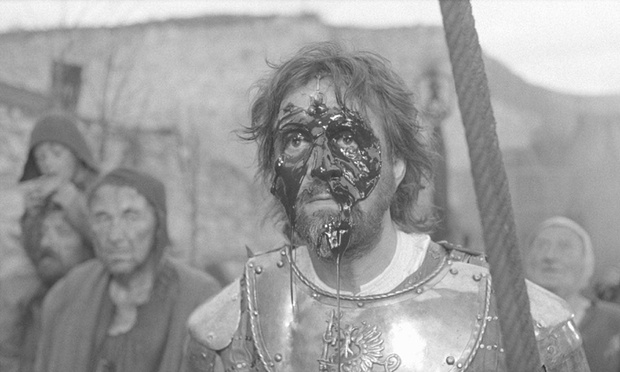 Since I spent the first week of 2016 visiting friends in England, this post has been delayed along with my Top 20 of the year. I've decided to push the latter one back until after the Oscars because a) the Academy Awards mark the end of the movie calendar and b) a lot of films from last year that I've been meaning to catch up on have started to hit streaming services and home media, so it feels like waiting a few more weeks would give me a chance to come up with a fuller sense of film in 2015.

In the meantime, here's my final movie journal for 2015 and, as with October and November, it was a month heavily focused on recent releases as I tried to catch up for awards consideration. Far and away the worst film I watched in December was David Koepp's Mortdecai, a laughless comedy that wastes the tremendous talents of all involved to no particular end. Possibly the worst thing about it was the fact that it features a single solitary moment - when Johnny Depp, as the eponymous Charlie Mortdecai, casually throws his drink away so that he can fondle Olivia Munn's breasts - that was genuinely funny, and reminded me of what a natural physical actor Depp can be. The inclusion of one decent bit of business just served to underline how little anyone seemed to be trying, and how there was a good film in there somewhere if anyone had bothered to work for it.

And here's the countdown of the ten best films I watched in the waning days of 2015.

Though end of year list making is a pain and a kind of annoying way to treat works of art (hence my aforementioned decision to just kick that particular can down the road for a few weeks), it also means there is a sudden deluge of tacit recommendations, often of films I haven't heard much about. Phoenix was one such title, since I had heard the name being bandied about but it was only after it cropped up on a few top ten lists - coupled with it being added to US Netflix streaming - that I sought it out. I'm glad I did, because Petzold's noir-infused spin on Vertigo, in which a Holocaust survivor tries to discover whether or not her husband betrayed her to the Nazis, spins a dizzying tale about intimacy, trust, and identity that manages to take a dense premise (Nina Hoss' character, having been disfigured by her experiences and believed to be dead by everyone she knows, approaches her husband pretending to be a stranger, only for him to ask her to impersonate his supposedly dead wife (i.e. herself) in order to claim an inheritance) and deliver a surprisingly sleek, yet really affecting, drama. It also boasts one of the very best final scenes in the whole of cinema.

Although I prefer Far From Heaven in the sub-genre of "Todd Haynes-directed melodramas about repressed sexuality set in the 1950s", I still found Carol to be a rich and evocative watch. Cate Blanchett and Rooney Mara are both great as co-leads, while Haynes' wintry cinematography lends an extra level of melancholy to an already sad story.

It's not often that one of the most acclaimed films of the year is also one of the most disgusting (though between this and last year's Wetlands we're on a bit of roll), but such is the case with German's gross sci-fi epic. Based on a novel by Arkady and Boris Strugatsky, of "Roadside Picnic" a.k.a. Stalker fame, it revolves around a scientist who has traveled to a culturally and intellectually backwards planet, one in which the intelligentsia have been brutally culled, and set himself up as a local Lord in order to try and nudge the people towards progress. What unfolds is a relentlessly unpleasant world full of shit, blood and vomit in which the scientist has to navigate between the demands of his mission and his place within this grime-encrusted community. It's a grueling and slow watch, but also unlike anything I've ever seen.

After charting the beginning of a relationship in the brilliant Weekend, Haigh deals with the possible end of one in the often devastating 45 Years. Set over the course of the week leading up to their 45th anniversary party, an elderly couple's (played by Tom Courtenay and the unparalleled Charlotte Rampling) relationship is shaken when they learn that the body of the husband's deceased girlfriend, who died in a mountaineering accident 50 years earlier, has been recovered. That stirs up a lot of memories, many of which haven't been shared before, as the two spiral into a quiet crisis as the party looms. Like Weekend, 45 Years is a pretty unassuming drama that unfolds delicately, but ultimately packs a real punch as Rampling allows her conflicting emotions to play out in the smallest of gestures.

The rare example of a film about disenfranchised youth to embrace the fun of being young and not really giving a fuck, while also showing the downsides, Sciamma's film manages to be both hard-hitting and effervescent as it follows the lives of a group of black teenage girls growing up in a poorer suburb of Paris. While having a sense of fun - best illustrated by a transformative scene in which the girls lip sync to "Diamonds" by Rihanna (while partying in a hotel room which they paid for using stolen money) - it also has a lot to say when it comes to ideas of gender and race, particularly as they relate to an area of French society which is not depicted very often in film.

Tarantino's latest has been mired in controversy over his comments about police shootings and the film's somewhat incoherent attempt to grapple with America's history of racism. I have to admit that the latter gave me pause throughout - Tarantino's always been enamoured of a certain racial epithet and I now wonder if he's started making Westerns because it gives him license to use it as much as possible, regardless of whether it is justified by the scene or fits the rhythm and meter of the dialogue - and it increasingly seems that his move towards a more political kind of filmmaking is well-intentioned but lacking in real insight. Surrounding that incoherence is an immensely entertaining, formally flawless film that cribs from both Agatha Christie and John Carpenter to fun effect. By placing his characters in one location and slowly bringing them to a boil, he gets some great performances from Tarantino stalwarts like Samuel L. Jackson and Tim Roth, while also letting relative Tarantino newcomer Walton Goggins steal the show as a racist, slow-witted lawman who keeps the other characters - and the audience - guessing until the final moments.

It's been seven years since Kaufman last directed a feature, and his follow-up to Synecdoche, New York feels like a mirror image of it. Whereas his earlier film took a surreal premise and presented it in a matter-of-fact way, Anomalisa takes a very grounded story - man has a mid-life crisis while staying in a hotel room for a conference - and presents it in a surreal way. Using stop-motion animation and having all but two characters be voiced by Tom Noonan, Kaufman and his co-director, Duke Johnson, create an achingly sad depiction of a man (voiced by David Thewlis) who is so lonely and isolated that literally everyone else in the world sounds the same. Yet when he starts to hear another person's voice (that of Jennifer Jason Leigh), the film pivots away from the standard idea that a female character exists only to help "fix" the broken male protagonist by showing that the protagonist's problems are possibly beyond fixing, and that he may not deserve to have them fixed at all. It's probably the furthest Kaufman has gone in terms of creating a lead character who is both sympathetic and repellant, but he makes both of those extremes work to the film's advantage.

Given the increased profile that Fargo has attained in the wake of the TV series, I'm surprised that this Fargo-adjacent effort hasn't been getting as much attention as it richly deserves. Based on a somewhat famous urban legend about a Japanese woman who travelled to Minnesota looking for the money Steve Buscemi buried at the end of the Coen Brothers' film, Kumiko stars Rinko Kikuchi as an isolated Tokyo office worker who obsessively watches her copy of Fargo on VHS (and later DVD) and, faced with pressure at work and from her mother, jets off in search of the aforementioned cash. What unfolds is a sometimes funny, but often heartbreakingly sad story about the ways in which art offers an escape from the drudgery of everyday life, but can also prove destructive. Kikuchi is spectacularly good in the film, and the mixture of the snowbound locations and The Octopus Project's dissonant score create a ghostly and unnerving journey.

There's something to be said for a simple story, well told, and Brooklyn is both of those things. In telling the story of an Irish immigrant (Saoirse Ronan) who travels to New York, it hits a lot of familiar beats when it comes to loneliness, homesickness, and the difficult yet necessary work of building a new life far away from everything you've ever known. But even if the story feels familiar, the central performance from Ronan, as well as supporting turns from Emory Cohen and Domhnall Gleeson as her prospective suitors, and Nick Hornby's subtle script, make them feel fresh and affecting.

My first Quay Brothers film and one that enticed me to seek out more. An abstract stop-motion animation that is equal parts haunting and horrifying.
By Edwin Davies
Labels: december, film, movie journal
Newer Post Older Post Home