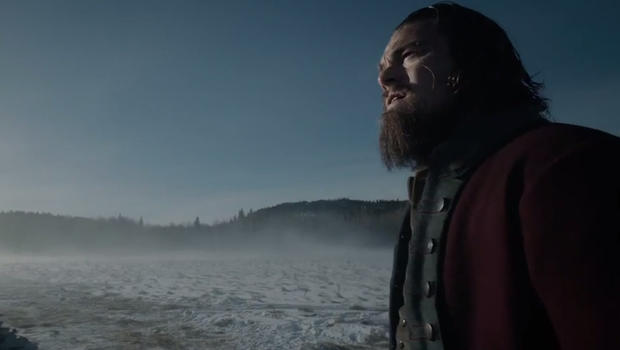 Although The Revenant is directed by Alejandro González Iñárritu, it's more reminiscent of the past work of its cinematographer, Emmanuel Lubezki. Specifically, it shares a lot of visual, thematic, and narrative similarities with Gravity, which Lubezki shot for Iñárritu's friend and sometime collaborator Alfonso Cuarón. Both are about individuals surviving in the face of extreme circumstances, both are better as experiences than as narratives, and both stories consist primarily of catastrophes befalling their protagonists with almost comic frequency. The main differences between the two are that Gravity is (mercifully) shorter, considerably more hopeful, and ultimately better.

Yet the distance between the two is pretty minimal for much of the first hour. After a brief opening in which Iñárritu indulges in some Terrence Malick-lite narration over an impressionistic blur of images - a sequence which serves as pretty much all of The Revenant's backstory -  the film starts with a jolt as a hunting party led by Captain Andrew Henry (Domhnall Gleeson) is attacked by members of the Arikara tribe. The resulting battle is a dizzying and dazzling display of cinematography and choreography. Lubezki's camera follows the attack using one of his trademark seemingly unbroken takes, swooping from death to death and fight to fight, turning the broader chaos of the attack into a series of smaller life-and-death contests.

In a stark reversal of how action is treated in most modern American movies, Iñárritu and Lubezki shoot chaotic events with a singular and total clarity. The effect is both exhilarating and disorientating, since we are placed in the midst of a battle and get to see the action up close, but that means that we only have as much knowledge about what is going on as the characters we are following do. The lack of coverage and cutaways make for an anxiety-inducing combination, turning a traditional Western scene of soldiers being attacked by Native Americans into something that feels new, even if its depictions of the Native Americans themselves are hopelessly retrograde.

The attack devastates Henry's company, leaving him with only a handful of men and a fraction of the precious pelts which they had trekked through the wilderness to acquire. Among the survivors are the tracker Hugh Glass (Leonardo DiCaprio), Glass's half-Pawnee son Hawk (Forrest Goodluck), and the mercurial John Fitzgerald (Tom Hardy). Fitzgerald is already distrustful of Glass and Hawk since they were away from camp when the attack started, and his enmity only grows after Glass is mauled by a bear and left clinging onto life. Faced with the prospect of being hunted down by the Arikara, assuming they don't freeze or starve to death first, Fitzgerald decides to take drastic action, the end result of which being that Hawk dies and Glass is left for dead while the rest of the party move on. Fortunately, revenge being Nature's 5-hour Energy, Glass' desire to see Fitzgerald pay for what he did gives him the strength to persevere, regardless of how many disasters are hurled his way (and there are a lot of them).

That opening stretch is the most exciting part of The Revenant, both because it contains the film's most thrilling sequences - the opening battle and the bear attack, which somehow managed to be even more shocking and terrifying that I expected - but also because it displays a singularity of purpose and focus. Even as it jumps between different stories and characters - some of whom we only meet during the last ten seconds of their lives - its long takes and extreme closeups force us to remain in the head space of these characters as they contemplate a selection of bad options. Even in quieter moments, the claustrophobic camerawork and the ominous score by Alva Noto and Ryûichi Sakamoto keep the pressure on. It's an overwhelming and enveloping experience that places you in the world of the film better than any 3D or 4DX screening ever could. For that first hour, The Revenant is a unique and thrilling work.

That focus falls apart the moment that the members of Henry's party begin to separate as the severity of Glass' injuries (realised with some truly horrifying makeup) forces some to stay behind and care for him while the others press on. Once that happens, the film splinters into two distinct halves. The first focuses on Glass' survival and single-minded pursuit of Fitzgerald, and continues in the vein of the opening hour. It's a bleak, almost Herzogian look at man in extremis which places little emphasis on plot and much on atmosphere and how brutal nature can be. (Though Iñárritu and his co-writer, Mark L. Smith, save their worst indictments for the French, who are depicted as total bastards.)

DiCaprio provides a human centre for this more experimental half. His often wordless performance certainly feels like Capital-A Acting, and that he wants everyone to know that he's working really hard, but it also displays a naturalism absent from many of his previous performances. Admittedly that's because he actually is experiencing a lot of these hardships, and it's probably pretty easy to act like you're freezing and wet when you're wading through actual freezing water, but that shouldn't detract from the fact that he gives a believable performance. And at least his bigger, more exuberant moments are justified by how extreme his situation is; if you can't go big when you're gutting a horse to turn it into a Meat Snuggie, when can you?

The second half, which follows Fitzgerald and Bridger (Lee Carter Will Poulter), another survivor of Henry's company, as they head to the safety of a nearby fort, is much more ordinary. There's a simmering conflict between the two men since Bridger feels remorse over leaving Glass behind and is unaware that Hawk is dead, and Hardy has a lot of fun playing a man who was born without the ability to use consonants, but any time that the film cuts to them - or any time that it indulges in laughable dream sequences and hallucinations - it breaks the spell that the superior half casts. It reminds us that, for all its formal daring and ambition, The Revenant is a pretty simplistic revenge story, and while there is nothing inherently wrong with a simple, well-told revenge story, this particular one is dressed up to look loftier and more significant than it actually is.

That might be why the most enjoyable part of the film, which comes in the final third, is the part which ultimately derailed the film for me. Once Glass has tracked down Fitzgerald, all pretenses to pushing the boundaries of cinema slip away and the film settles in to being a more polished version of the psychological Westerns that Anthony Mann made in the 1950s. The finale is very reminiscent of films like The Naked Spur and Man of the West, and it's fun, filled with suspense and tension, and even has a moment of subterfuge that could have been ripped right from a Louis L'Amour paperback. The problem with that, though, is that it underlines just how superficial the first two thirds actually were - for all their self-importance, they were ultimately in service of something so one-dimensional and familiar - and hints at what a fun film we could have had if Iñárritu had gotten out of his own damn way.

To return to the Gravity comparison, Cuarón's film had a better sense of what it was and also maintained a singularity of focus that never allowed its experiential bubble to burst. Iñárritu's film thinks that it has something significant to say, but takes two and a half hours to say almost nothing at all. I'd quote that old Macbeth line about sound and fury, but since Iñárritu stole that to gussy up Birdman, it would feel almost as hollow to invoke it as it feels to watch The Revenant.