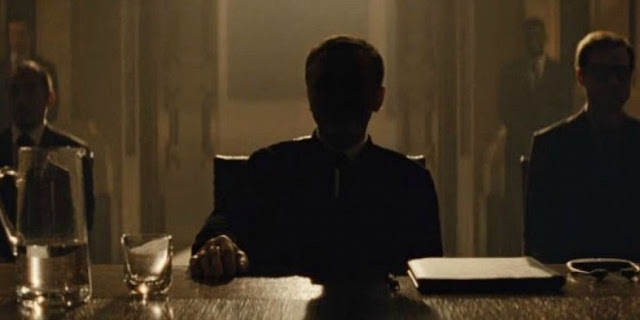 There are few franchises as reactive as the James Bond series. Over twenty-four films and fifty-three years, it has had to adapt and change in order to survive, often taking on the qualities of the trend du jour in order to remain relevant. When blaxploitation cinema was at its height, Bond went to Harlem and fought against Voodoo gangsters. After Star Wars became one of the most popular movies of all time, Bond went to space. As Hollywood became obsessed with hard-nosed crime dramas focused on the drug trade, Bond dismantled a cartel and fed Benicio del Toro through a shredder.

Some of those transitions were more gracefully handled than others, but Bond endured, not only because the producers were savvy enough to see which way the wind was blowing, but because they responded to what was happening within their own series. The ridiculous excesses of the Pierce Brosnan era necessitated the stripped down Casino Royale, which also needed to match the physicality of the Bourne series, while the visual and narrative chaos of Quantum of Solace demanded the more elegant and focused Skyfall, which also borrowed heavily from the work of Christopher Nolan. The Bond films have always reflected the culture in which they are created, but they also reflect how audiences feel about the series itself.

While the producers have always shown a knack for righting the ship, they struggle when staying the course. After producing the most popular installment since Sean Connery hung up his Martini glass,  they've kept most of Skyfall's creative team in place for the followup, and have doubled down on the elements that worked the last time. Director Sam Mendes returns to lend the film a weightiness that belies its romantic, anachronistic version of espionage, while screenwriters John Logan, Neal Purvis and Robert Wade, alongside newcomer Jez Butterworth, pepper the script with nods to the series' past while arguing (a little too shrilly) that there is still a place for Bond in a world of mass surveillance and drone warfare.

Perhaps the most significant holdover from Skyfall, and the one which ultimate proves to be the most troublesome, is the idea that Bond's (Daniel Craig) fight against the villain of the piece only matters if he has some sort of personal connection to them. Whereas Javier Bardem's Silva was a former agent who acted as a metaphorical fraternal rival for M's (Judi Dench) affection, Christoph Waltz's Franz Oberhausen takes it a step further by being someone who knew Bond as a child, and who is now the head of the (long-absent from the franchise, for byzantine legal reasons) criminal organisation SPECTRE. The problems with that approach don't become apparent until the final third of the movie, in part because Waltz is absent apart from a brief introductory scene when Bond rather casually infiltrates a SPECTRE meeting. Until it gets to the business of unraveling his relationship to Bond, Spectre is content to be a good, middle-of-the-road Bond movie, though delivered with considerably less enthusiasm than the last few instalments.

Bond uncovers clues pointing to the existence of SPECTRE, but a pre-credits unauthorized jaunt to Mexico to carry out an assassination puts him at odds with the new M (Ralph Fiennes), who is trying to keep MI6 afloat in the face of plans from a private security agency, headed by the weaselly C (Andrew Scott, whose casting so obviously indicates that his character will turn out to be a villain that he might as well have ended each scene with a maniacal laugh), to implement a new global surveillance service. Forced to go rogue, Bond travels to Mexico, Austria and Switzerland, ultimately, teaming up with Madeline Swann (Lea Seydoux), the daughter of recurring villain/punching bag Mr. White (Jesper Christensen), who becomes a target for Mr. Hinx (Dave Bautista, who steals every scene despite having precisely one line of dialogue in the whole film), a SPECTRE operative tasked with eliminating first Mr. White, then Bond.

Meanwhile, back on British soil, Moneypenny (Naomie Harris) and Q (Ben Whishaw), try to keep anyone from discovering that Bond is out of the country when he is meant to be out of action. It's a facade that proves increasingly hard to maintain once Bond starts driving experimental cars through the streets of Rome, but it provides plenty of opportunities for Harris and Whishaw to demonstrate how effortlessly charming they are when they are flustered and irritated, and makes the film look even more like a jokeless episode of Archer (or a more dour version of Mission: Impossible - Rogue Nation) than it already did. That half of the film is perhaps most interesting as an opportunity for the filmmakers to make broad swipes at the abuses made possible by unrestricted mass surveillance, in turn making Spectre an unlikely companion piece for Citizenfour in shaping how cinema responds to Edward Snowden. Aside from that, though, it feels like padding to distract from how little actually happens in the main plot.

For the most part, Spectre rehashes tropes and plot points from the series' past (Bond finding a woman at a remote clinic, in particular, seems like a very blatant nod to On Her Majesty's Secret Service), with little new except the order in which the story beats are arranged. Then again a bland or derivative story has never been much of a problem for the Bond series: Story has almost always taken a back seat to beautiful locations, gorgeous women, and exciting action. While Spectre has the first two, it's largely lacking the final, most crucial element. Apart from a brutal, protracted fight on a train between Bond and Hinx, which benefits from an intimate setting and a sense that Bond has met his physical match, most of the action sequences are lacking stakes and invention. They're well-shot and put together with aplomb, but Bond himself is in unflappable superhero mode, with none of the vulnerability displayed in Casino Royale or Skyfall. There's no sense of danger underpinning them.

Even that would not be that big of a problem (most of the pre-Craig Bond films were pretty low on danger and went out of their way to make Bond out to be unbreakable, after all) if anyone involved seemed to be having any fun. Craig's grim, terse portrayal of Bond was a perfect fit for Casino Royale, but his unwillingness to crack a smile, even as he finds himself in much more outlandish situations, has turned him into as much of a caricature as Brosnan's relentlessly smug version of the character was in Die Another Day.

The script takes its cue from Craig, resulting in some of the most prosaic and dull dialogue of any Bond film, with most of the lines feeling like placeholder dialogue that was meant to be replaced with something with personality. It's especially galling considering that they landed Christoph Waltz, an actor who has two Oscars attesting to his ability to make ripe, delicious lines sing. Casting him as an over the top villain, then giving him nothing to say, is as wasteful as forcing Glenn Gould to play "Chopsticks". Ben Whishaw gets a few laughs whenever he is forced out of his comfort zone by Bond's actions, but he's pretty much the only cast member who acts as if a spy thriller isn't Ibsen.

Despite all of this, Spectre manages to be entertaining for much of its first two-thirds, if only because the basics of the Bond formula remain a sturdy baseline. It only comes undone when it delves into the shared backstory between Bond and Oberhausen (or, to give him his more well-known name, Blofeld), and in turn tries to turn the Craig era into a single narrative, with Oberhausen acting as, to paraphrase his one half-decent line, the author of all of Bond's pain. That idea on its own would be fine, not to mention in keeping with how Blofeld has been used by the series in the past; as a nemesis who orchestrates nefarious plot after nefarious plot to vex Bond. But combined with the idea that they grew up together, it proves too neat, and almost desperate. Faced with the prospect of Craig leaving the series now that his contract is up (and because he genuinely seems to hate everything about making these films), Mendes and his team strain for significance and a sense of closure, but end up overwhelmed by half-baked ideas.