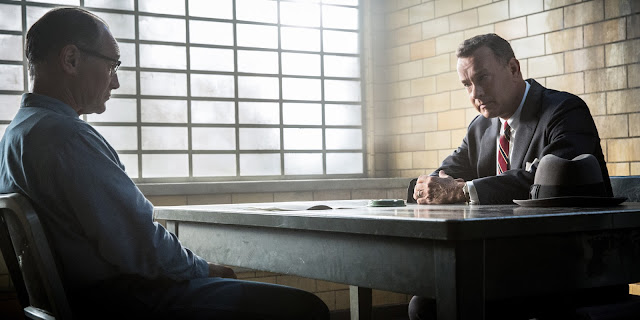 In addition to being a court room drama-slash-Cold War thriller, Bridge of Spies acts as a sampler of the various shades of Steven Spielberg's oeuvre. It opens with a showcase of his skill as a visual storyteller, transitions into a lively, wryly funny slice of crowd pleasing entertainment, before ultimately ending with an assured, minor-key genre exercise with strong political overtones. In short, it's the Neapolitan ice cream of Steven Spielberg's career. If you like all three flavours on offer, then it's a thoroughly enjoyable few hours. If you only like one or two, then stretches of the film are going to fall very flat, although ice cream is still ice cream.

The film begins with a burst of energy as Spielberg delivers one of the most suspenseful sequences he has produced in years. It's 1957 and Rudolf Abel (Mark Rylance) is a Soviet spy living in Brooklyn. A quiet, unassuming man who finds immense pleasure in his painting, Abel is perfectly suited to espionage, given that he is completely nondescript, and lives what looks like a quiet life in a fairly rickety apartment. Despite his best efforts, Abel has come to the attention of the FBI, and as he makes his way to collect a secret message, he is tailed by a group of agents who try not to lose him in the crowd.

This cat-and-mouse game, which takes place amidst the hustle and bustle of everyday life, with neither side letting on that a chase is even happening, is essentially wordless (the only dialogue is of the hastily gasped, "Where did he go?" variety, and could be removed without altering the meaning of the scenes), and is a welcome reminder of Spielberg's genius for creating tension using the most basic tools. All he needs is a camera and some human bodies and he can conjure up something as simple yet exhilarating as a man trying to get on the same train as someone else without being noticed.

Ultimately the FBI do catch up with and arrest Abel, and the second distinct segment of the film begins with the introduction of James B. Donovan (Tom Hanks). A former prosecutor at the Nuremberg trials and currently a partner in his own firm, Donovan is singled out as the perfect man to mount a defense for Abel and ensure that he gets a fair shake (or as fair a shake as a spy is likely to get) from the American legal system. Unfortunately for the people who appointed him, Donovan does precisely that, and begins putting together the best defense he can, even though it's clear that Abel is a spy, and even though everyone - from the press to the FBI to the judge presiding over the case - wants him to just go through the motions so that everyone can say that Abel was given a fair trial. It also puts pressure on his home life, as his wife (a severely under-used Amy Ryan) and children face the intellectual and personal ramifications of Donovan representing the most hated man in America.

The mid-section of the film, which deals primarily with the trial and Donovan's efforts to represent his client as best he can, is its most purely fun and its most intellectually intriguing. Hanks is at his most avuncular when given the opportunity to play a man who presents himself as an aw shucks, small-town lawyer, but who is in fact very shrewd and constantly working every angle. It also benefits greatly from placing Hanks, who displays a somewhat blustery energy, opposite Rylance, who delivers every other line with the sly comedy of an Alan Bennett aside. The two actors play off of each other well, and they create genuine warmth between two men who, despite being on opposite ends of an ideological conflict, respect each others' integrity as they pursue their respective causes. The two bat the dialogue, written by Matt Charman and the Coen Brothers, back and forth with the sort of ease you expect from watching two veterans having fun.

The only fly in the ointment during this part is Janusz Kaminski's cinematography, which is so over-lit that some scenes look like they are taking part in some sort of heavenly courtroom like the one in A Matter of Life and Death. The film, with its longer-than-usual takes and clear compositions, hearkens back to an earlier form of Hollywood filmmaking (and if Hanks wants to cement his position as a latter-day Jimmy Stewart, Bridge of Spies is a fairly solid Anatomy of a Murder analogue), and the sheer amount of light on display suggests that they lit it intending to shoot in black-and-white but accidentally shot the whole film in colour.

The trial also best articulates the film's philosophy as it examines the tension that exist between America's ideals and its national interest. Donovan views justice and fairness as central to what the Cold War is being fought over, while those around him view them as malleable concepts that can be set aside if it's politically expedient. The middle portion of Bridge of Spies makes that argument more effectively than the final third, when the action shifts to Berlin as Donovan has to negotiate a trade for the pilot of a downed U2 spy plane, primarily because it's couched in legal arguments and good humour. There's a lightness of touch which allows for serious discussion of important ideas without it feeling like a lecture.

The pontification on display also manages to be both pointed and vague, directly addressing the issues of 1957, while discussing them in terms broad enough that its arguments could be applied to just about any political climate. As just one example, the idea that America should live up to its highest ideals even if it's difficult feels applicable to the debate over the Syrian refugee crisis in a way which probably was not anticipated when cameras started rolling.

The aforementioned Berlin segment is the weakest, as any nuance gets ironed out when faced with the starkness of East German oppression. Hanks maintains a light touch as he navigates a murky, Byzantine nest of bureaucrats and governments working at cross purposes, and Spielberg manages to create a few indelible moments, such as a scene in which Donovan is menaced by a group of youths, or when negotiations hinge on a small connection he makes with a junior bureaucrat. For the most part, the tone gets broader, characters are traded for caricatures (including Abel's family, a group of grotesques who would not be out of place in a Coen Brothers farce, but stick out here), and the contrast between East and West are drawn in terms that could not be more obvious.

It's not that the final third is bad, necessarily - although the climax does indulge Spielberg's sentimental streak in a way which undermines a genuinely sweet moment - but it's more didactic and strident than the film which precedes it. Crucially, the nature of the story means that Hanks and Rylance are separated for a great stretch of time, which removes one of the most compelling element of the whole endeavour.

Even though it peters out the further it gets from the interaction between Hanks and Rylance, Bridge of Spies is a handsomely made and entertaining film which ably demonstrates Spielberg's preternatural skill at moviemaking. It doesn't feel like anyone involved is straining too hard, but are happy to demonstrate just how good they are at what they do. It's the cinematic equivalent of watching a great athlete practice; not as amazing as seeing them in full flight, but it still provides a showcase of tremendous skill.