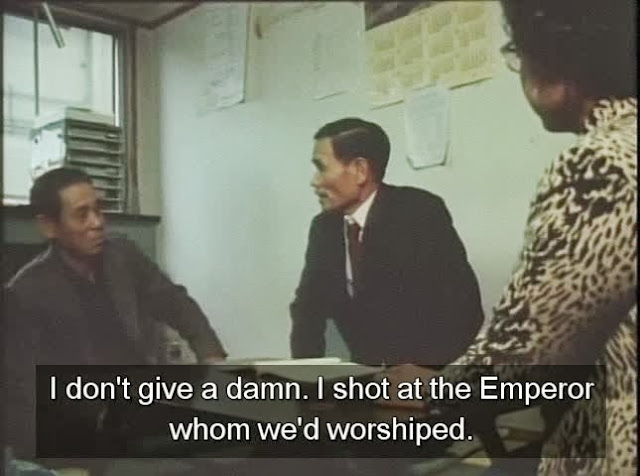 This was a month of illustrious firsts for me, as I dipped my toe into the filmographies of Pier Paolo Pasolini and Abbott & Costello for the very first time. In both cases, I have been aware of their work for a long time, but never made it a priority to check them out, though for very different reasons. In the case of Pasolini, when I first got into film I only knew him as the director of Salo, a film with such a daunting and unpleasant reputation that I kind of assumed he was just a director of self-consciously extreme cinema. Rewatching (and then reading) Mark Cousins' The Story of Film convinced me that I was deeply mistaken, and I look forward to working through the rest of his work in the future.

As for Abbott & Costello, I knew them for "Who's on First?" but little else, and assumed they were minor league compared to The Marx Brothers. Listening to Glen Weldon talk about them on a recent episode of Pop Culture Happy Hour made me doubt that assumption, and with good cause, because their films are both funnier and more visually sophisticated than I had anticipated. They are also, pound for pound, a lot more entertaining than your average Marx Brothers vehicle, because they don't have to grind to a halt to let one character play a harp. I ordered a collection of their Universal films - all 28 of them - on a whim and I'm hoping for a lot more laughter in the near future.

In total, I watched 24 films this month, all of which were new to me. There were two films which I would consider the worst that I saw, and I have divided them into the categories of Bad, But Entertaining and Bad And Boring. The title of BBE goes to Fateful Findings, which I've already written about at (arguably too much) length, so I will just reiterate that it is a hugely enjoyable film with pretty much no redeeming qualities.

BAB goes to John Huston's Reflections in a Golden Eye, which is a film that should be, at the very least, watchable. Huston was a great director, working from great source material (Carson McCullers' novel of the same name), and with a cast of ringers like Marlon Brando, Elizabeth Taylor, and a "young" Robert Forster. (I use quotation marks because Forster has the sort of craggy features which mean that he has looked more or less the same age for fifty years.) Yet the thing is completely inert, and fatally undermined by Brando's attempt at a Southern accent, which has the effect of making him even mumblier than usual, and borderline incomprehensible for most of the running time. The cinematography is interesting, and the decision to shoot everything so that it looks golden makes it a striking watch. However, that means that you can get pretty much everything you need from the film by looking at stills, Jesse Eisenberg in The Squid and the Whale-style.

Anyway, here are the ten best films I watched in September, 2015.

Quite simply one of the best films I've seen this year. A relentlessly uneasy tale of a friendship grown stale that uses its handful of locations and long, unforgiving takes to devastating effect. Elisabeth Moss is astounding and, between this and Inherent Vice, Katharine Waterston is having one hell of a year.

A documentary with the rigour and suspense of an Agatha Christie mystery, Hara follows WWII veteran and general shit-stirrer (he drives around in a car covered in anti-government slogans and, prior to the start of the film, had served time in prison for murder and for shooting at Emperor Hirohito) Kenzo Okuzaki as he investigates the unexplained deaths of two soldiers in his unit during Japan's campaign in New Guinea. As he visits different authority figures and tries to get them to tell him what happened, each scene takes on the form of a game between Okuzaki and his targets, a game which sometimes involves deception - such as when he hires actors to pretend to be relatives of one of the dead men - and at other times violence. A film which rides on the tension between Okuzaki's moral certainty and his ethically dubious methods, and between Hara's unobtrusive shooting and his very carefully constructed editing.

In addition to having possibly the most 1940s title imaginable, the third film that Abbot and Costello made with Arthur Lubin in 1941 is their most enjoyable and marks the duo's first step into the genre of horror-comedy. A delightfully ramshackle affair that finds Bud and Lou spending the night in a creepy and abandoned house with a group of strangers, some of whom end up dead, it features plenty of breathless wordplay and deceptively choreographed slapstick while managing to perfectly ape the visuals of Universal's horror works. It's the first of their films which really uses the camera to sell a joke, rather than feeling like a filmed record of a collection of bits they had worked out on stage.

For its first half, it's one of the best music biopics ever made, and even during its weaker second half it's still better than most. It manages to convert the revolutionary fervour of N.W.A. while staying on the right side of hagiography, and only on one or two occasions allows the performers to fall into caricature. I'm looking at you, guy they cast as Tupac.

I've been wanting to watch Spheeris' trilogy of documentaries about various L.A. musical movements for years and the recent Blu-ray release finally gave me that opportunity. The first film more than lived up to my expectations. Focusing on the likes of X, Black Flag and The Circle Jerks, Spheeris offers a mix of raw, occasionally terrifying live performances and funny, candid interviews with the band members. Together, they offer an intimate and evocative snapshot of a scene simultaneously on the verge of breaking out, and in the middle of collapsing.

Pasolini's debut hews pretty close to the neo-realism playbook. There's real locations, plenty of non-actors, and a focus on the experiences of people on the edge of society. In this case, a pimp (Franco Citti) who struggles to make ends meet after his one girl breaks her leg. Pasolini paints a picture of Accattone's life which is both bleak and alluring, filled with despair and camaraderie, all while hinting at the surreal and metaphysical aspects which would define his later work.

An intelligent, detail-orientated examination of the U.S. Justice system and what happens when a young black man is falsely accused of murdering a white woman because he happened to be in the wrong place at the wrong time. De Lestrade carefully and thoroughly destroys the prosecution's argument, and uses the specifics of Brenton Butler's case to examine institutional racism and police corruption on a larger scale. The only knock against it is that, in retrospect, it looks a little slight in comparison to de Lestrade's more expansive miniseries The Staircase. However, it's still a great film and it's amazing how much it achieves with a fraction of the time afforded to The Staircase.

It's pretty much impossible for me to dislike a film that begins with a title card this badass, which both establishes the film's hard-boiled credentials and promises to be over and done in eighty minutes. When you add in that the film itself is a bleak and tense story of two men who get held hostage by a psychopath who proceeds to play sick games with them, it makes for a very appealing package.

The horror equivalent of a hangout movie, except instead of wanting to spend time with its characters because they seem cool and interesting, you want to spend time with them because they're weird and interesting. Whale takes one of the hoariest old cliches - stranding characters who don't know each other in an old house - and enlivens it by populating the house with grotesques played by great actors, and imbuing the script with an offbeat and slyly campy sense of humour. It's also hard not to admire the old-fashioned showmanship of a film that starts with a message assuring audiences that Boris Karloff is in the film, he just looks very different to how he did in Frankenstein, and ends with a message saying "A cast this good bears repeating" when the credits appear.

Sometimes all you're looking for from a film is to be surprised, or to see something that you have never seen before. I can say with some certainty that, prior to watching The Wayward Cloud, I had never watched a man finger a watermelon while a woman nearby writhes with pleasure. I feel like this is some very specific kind of rite of passage which I may not have been prepared for. Like a lot of Tsai's films, this is a severe examination of social alienation and whether or not casual sex is responsible for, or a symptom of, it. It's a demanding watch, but an invigorating and unpredictable one.
By Edwin Davies
Labels: 2015, film, movie journal, Movies, September
Newer Post Older Post Home