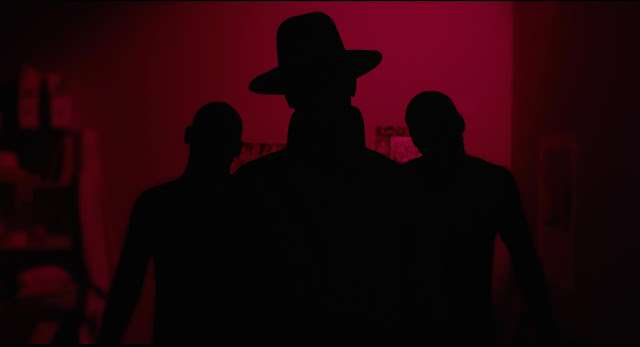 I'm a fairly solid sleeper. I rarely have nightmares, I don't suffer from insomnia, and it takes the sudden dislocation of jet lag or extremely unpleasant weather to mess up my sleep patterns. I don't say all of this to brag, but to establish that there is a direct causal link between watching Rodney Ascher's The Nightmare, and one of the worst night's sleep I can remember.


As with Ascher's previous feature, Room 237, The Nightmare is a documentary which takes an abstract approach to a psychological concept. Where Room 237 used conspiracy theories about the "true" meaning of Stanley Kubrick's The Shining as a means of examining how art is as much about the interpretation of its audience as it is the intention of its creator, The Nightmare uses the stories of eight people who suffer from sleep paralysis to illuminate - not to mention recreate - some primordial terrors. To that end, Ascher mixes together interviews with his subjects, who provide a relatively broad range of life experience, with reenactments of their experiences with sleep paralysis, creating an unusually disquieting concoction.

Adding a sense of verisimilitude to proceedings is the involvement of the interviewees, many of whom play themselves in the recreations. Not only does their presence make you believe that they have gone through the events that they are describing, but their willingness to take part subtly conveys how much they have internalised their nightmares. Having a red-eyed demon scream in your ear has to be pretty typical for someone to agree to act it out like it's no big deal.

The recreations themselves are very well-handled; rich in menace and atmosphere, they place these simple, almost elemental images of horror in normal looking bedrooms. The combination of mundane settings with deeply unnerving figures, coupled with the interviewees' calm narration and some unsettling sound design, create the slight unbalance of a nightmare. A sense that everything looks normal, there just happens to be a shadowy devil man standing in your room and you can't move. The overwhelming sense of claustrophobia and panic makes The Nightmare a rare example of a documentary that feels genuinely cinematic, rather than something that could as easily be watched at home without losing anything. It needs to be seen in a darkened room where you have no control over when the images will stop, forcing you to take on at least some of the characteristics of its subjects.

It quickly becomes apparent that these nightmares share certain recurring images and tropes: 3D shadows referred to as "The Shadow Man", a fedora-wearing spectre imaginatively called "Hat Man", and a sense of helplessness and immobility which comes as these figures appear and slowly approach the afflicted. Some of the other details and interpretations differ - one of the interviewees sees the figures as human-shaped walls of static, and believes that they are proof of alien visitations - but the broad similarities, ones which are shared between people of different ages, races, and cultures, creates a web of menace that very slowly constricts over the course of the film. It's not merely that sleep paralysis is a terrifying thing (and that Ascher and his crew do such an excellent job of simulating it) that makes The Nightmare so unnerving, but the preponderance of experience that the subjects bring. Not only is it creepy, but it afflicts thousands of people with no clear explanation for why it happens.

Ascher falters when he tries to delve into some of those possible explanations. Just as Michael Myers was scarier before Rob Zombie gave him a backstory, The Nightmare is a more visceral (and empathetic) experience when it focuses on the personal details of its subjects' stories. When it moves into the fuzzier territory of cultural representations of the condition, it ends up being pretty surface level, and distracts from the stories being told. Its feints at placing sleep paralysis in a broader context are just detailed enough to puncture the carefully cultivated sense of dread, but not so detailed that they provide much substance. Injecting a documentary about sleep paralysis as a broader phenomenon into an experiential examination of specific individuals causes The Nightmare to turn, however briefly, into the cinematic equivalent of Lulu, the album that Metallica and Lou Reed made together: two great things that should never, ever have met. It's best when operating as a horror film that happens to deal with real people, rather than a documentary that happens to be pretty scary.

Even if The Nightmare loses steam the less it focuses on the individuals involved, I cannot escape the fact that it got under my skin and freaked me out in a palpable, inescapable way. Several of the interviewees say that they or people they knew had never experienced sleep paralysis until someone described it to them. Once you hear a few people say that, it lends the film a The Ring or It Follows quality which is hard to shake. I didn't have nightmares after watching The Nightmare, but the fear that I would have them because I watched it made sleep pretty elusive.