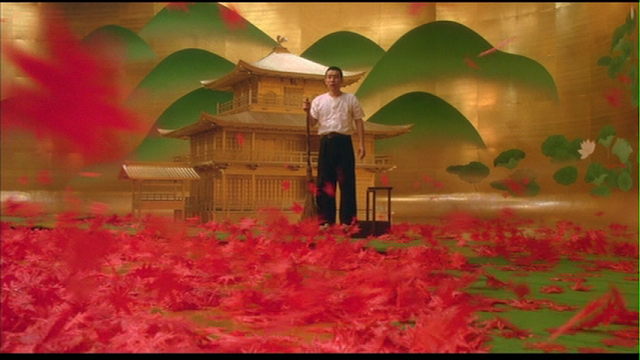 This was another busy month for me as I watched a grand total of 43 films in July. Of those, 40 were features and 3 were shorts, and all but 3 were first-time viewings. There was no overarching theme to those viewings, though the publication of Little White Lies' list of 100 Great Movies by Female Directors (which can be seen in full on Letterboxd here, though you really should read the individual entries on the LWL site) did drive me to seek out more films directed by women than I might otherwise have done, including incredible shorts like Lois Weber's Suspense and Alice Guy's Falling Leaves. I've only seen 22 of the films on that list, so one of my aims over the next few months is to get that total up to a less mortifying number.

The best film I rewatched this month was Michael Mann's Thief, which I watched for a forthcoming episode of Shot/Reverse Shot on the work of Jerry Bruckheimer. Although I think Mann has made more enjoyable films (both Heat and Manhunter leap to mind) and more aesthetically bold ones (Collateral and Public Enemies), Thief strikes me as the sweet spot between the two. It's a pleasingly hard-nosed character study which looks beautiful, and is about as sparse an iteration of Mann's style and themes as you are likely to find. I also realised that I forget about the adoption storyline every time that I watch it, and that Jim Belushi is a pretty good actor when he needs to be (see also: his performance on HBO's great miniseries Show Me A Hero).

The worst film I watched for the first time was The Wizard of Oz. Not the classic 1939 musical version, which has been one of my favourite films since childhood, but the 1925 silent version directed by and starring Larry Semon. Despite some pretty good slapstick, some of which verges on Looney Toons levels of sheer visual lunacy, the pacing is really slow, the romance is dull and, oh yeah, it is horrendously racist. Like, "introduce the only black character by having them sit on the floor eating watermelon" racist. Obviously you have to grade older films on a curve when it comes to their social views, but no film is that good.

Anyway, we'll leave that unpleasantness behind and get to the top ten.

I've liked or loved a lot of Schrader's directorial efforts, but their strengths are typically down to performance and theme, rather than their style. Mishima is the first film of his I've seen which combines his forceful writing with the kind of vivacity that you'd associate with Scorsese. In telling the life story of Yukio Mishima, the hugely influential Japanese writer who tried to stage a coup in 1970, Schrader employs a vibrant, boldly expressionistic style to dramatise different works of Mishima's in order to illuminate different aspects of his character. The end result is an adventurous character study that examines the line between art and artist in the most thrilling way imaginable.

The elevator pitch for Julia was probably not "imagine if Sweet Dee from It's Always Sunny In Philadelphia kidnapped a child and went to Mexico" but it should have been. Tilda Swinton gives one of her funniest and most uncompromising performances as an alcoholic who gets the idea to ransom a kid after hearing the scheme from someone in her AA group, only for things to very quickly get out of hand. Swinton's performance veers between charismatic and repellant when it needs to, but she's never less than captivating. She'd have to be, considering that she's onscreen for almost two and a half hours of Cassevetes-aping intensity.

The main thing I knew about The Leopard before I watched it was that it was long. That turned out to be very true, but what no one really expressed to me before was how well it uses its length. Though it focuses on a relatively small number of characters, its running time allows it to explore the shifting personal and political forces at work in nineteenth century Italy in minute detail. It's visually gorgeous, but the imagery is just one of the many pleasures of a film which aims, and succeeds, at capturing the upheavals of the past while ruminating on those of the present.

I'm cheating slightly by bundling these two films together, but they feel like such obvious companion pieces that it's hard for me to separate them. A pair of documentaries which examine the experiences of immigrants to Switzerland from different ends of the process (The Fortress is about new arrivals waiting to see if they will be granted visas; Special Flight is about people who have been living there for a while who are waiting to see if they will be deported), they make for an emotionally draining viewing experience. Special Flight, in particular, is devastating in its depiction of how bureaucracy dehumanises both the people who are are confronted by it and those who have to carry it out. In an era of rabid anti-immigration hatred, these simple, humanist films feel incredibly radical and incredibly necessary.

I've written enough on this already, so I'll just say that if all music biopics were as good and smart as Love & Mercy, the genre wouldn't be one of the most ignoble.

Probably the most entertaining and playful film you could make out of the life of the titular philosopher. Jarman's theatrical staging gives him and his cast license to go big, and they use that opportunity to make the members of Wittgenstein's family or Bertrand Russell as lively as possible. Not just a fun way of elucidating Wittgenstein's work, but fun full stop.

This was one of my most anticipated films of the year and it did not disappoint. Admittedly, that's because its distinctly John Carpenter-esque visuals and unnerving synth score by Disasterpiece are firmly within my wheelhouse, but it's also one of the creepiest films I've seen in a while. The basic idea of being stalked by a relentless, malevolent force is wonderfully simple, which is why it works so well as a metaphor for STDs, the experience of being a rape survivor, or anything else you can apply to it.

You'd think that there wasn't much new ground to tread when it comes to Westerns. People have been making them for a long time, with as many permutations as you can imagine. Trust former Beta Band member John Maclean to find a new way of shooting a Western, or at least a novel location for one. Shot in New Zealand, but set in the U.S., there is a vividness that sets it apart from pretty much all other modern Westerns, which tend to shoot everything covered in dust, as if making everything look brown is synonymous with authenticity. As well as being visually alluring, it's a wonderfully lean summation of a century of Western cinema, but the strength of the performances by Michael Fassbender and Kodi Smit-McPhee prevent it from becoming a mere exercise in exploring a genre.

While not as austere as some of his more famous works, this story of a gay relationship between an artist and his assistant is probably his most moving. His unadorned approach to the story makes the slow decay of the central relationship all the more heartbreaking.

We've had more than a decade of comedy Jason Statham impressions, but the man himself ably demonstrated that he's the funniest version of Jason Statham there ever will be.
By Edwin Davies
Labels: 2015, july, movie journal
Newer Post Older Post Home