Sitcoms and Sadness: A Conversation About BoJack Horseman 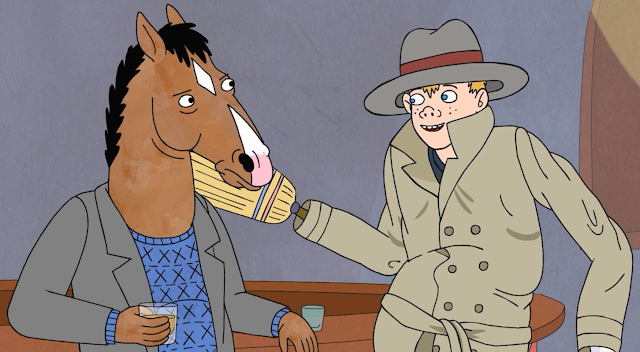 In anticipation of the second season of Netflix's BoJack Horseman, a previously unheralded animated series about a washed up sitcom actor who also happens to be a horse (Will Arnett) that became something of a word-of-mouth hit during its first season, I sat down with my friend and fellow pop culture addict Lewis Davies (@LewisKernow) to discuss the show and why it struck a chord with audiences.
Ed: My first question would be, had you heard much about the show prior to watching it? I knew that a show called BoJack Horseman existed because I follow Paul F. Tompkins on Twitter and he posted pictures from their table reads. Since the title is pretty unforgettable, it lodged in my mind but I didn't really think about it again until ads started appearing on basically every website I visit.

Lewis: I think it had entirely passed me by until it appeared on Netflix. Netflix has a peculiar way of removing all value judgements about the quality of its programming, especially from documentaries, so I started watching with a degree of trepidation. Family Guy has really turned me off animation that has a cruel "everyone is either an arsehole or a victim" premise, which is kind of how BoJack Horseman seems when you first encounter it. I was dubious up until the line about trying to steal a meal from Neal McBeal the Navy Seal and then I knew I was in safe hands. Thinking back, I should have known to trust in WIll Arnett.

Ed: It's interesting that you mention the lower expectations of Netflix, because I had a similar feeling going in. In my case, though, that was largely shaped by the early reviews of the show, which were pretty down on it. What was interesting about that, though, was that Netflix only sent out the first six episodes to critics, and I think it's generally true that the first half of the season is a little uncertain of itself in terms of tone and theme. It seems, like you say, to be pretty cruel and feels a little too much like an Archer derivative.

But in the comments sections of pretty much every review I read, there was a sizable number of people who said variations on "the second half of the season is sooooo good." That reaction was what ultimately made me want to check it out since I found that the same thing happened with Orange is the New Black and the fourth season of Arrested Development; they started a little weakly but improved rapidly. Do you think that this is something inherent to the Netflix model, since creators know that they are going to have a full season and perhaps feel confident making the seasons backloaded? And do you think Netflix may have shot themselves in the foot by only releasing half the season instead of all to it (assumingly because they were worried about piracy or spoilers)?

Lewis: I'm not sure if it is inherent to the form or if it's just that it's really noticeable on a binge watch. I think with both Orange and BoJack it comes from the fact that they are a weird alchemy of comedy and pain that had to find its way to the right balance. Anyway, yes, I think the series doesn't make sense without the second half, but that does change the way criticism works if you're sending them whole DVD box sets, especially if critics are such a diffuse breed now rather than being the employees of a few publishers. You might be able to do it but it would make every review release super stressful.

Ed: That's very true, and if anything the initially tepid reviews seem to have helped the show find an audience since the people who have watched the entire season have tended to become fairly vocal proponents for it. I've definitely seen mentions of it crop up steadily on Twitter and Facebook, and they almost invariably tend to be the result of one person recommending it to another. I'd hesitate to call the show a word-of-mouth success considering that it has been released through Netflix and they have a fair amount of marketing weight behind them at this point, but it definitely feels like something that has grown over time, rather than being the sort of instant conversation starters that OITNB and House of Cards have been.

Considering how the first season is structured, with the first half being more overtly funny and scabrous and the second half being more melancholy, what elements of the show's humour really stick out to you as being distinctive? The things that really make me laugh are the moments when the show deliberately pokes at the weirdness of a world in which human-animal hybrids are part of the fabric of everyday life. For example, the first joke on the show that made me laugh so much I had to stop watching for a few seconds was the one where a rooster is out for a run and screams "Hey everyone, it's morning!" Something about the way that these characters are human 99% of time, but in that 1% Princess Carolyn will get thrown from a car and land on her feet, or Mr. Peanutbutter will get in trouble with the law because of his hatred of the Postal Service, really works for me.

Lewis: I think it's all of that stuff, plus Vanessa Gecko being a human. The joke I really enjoyed was the character of Vincent Adultman, particularly as a counterpoint to the rest of the show getting more serious around this utterly absurd idea. My wife's favourite bit is the penguin having a mug that says third best dad. One that I really enjoyed was the tour of David Boreanaz's house, just because it's a joke about what a load of mediocre tat gets made and recommissioned. "Star of...I'm going to say Person of Interest."

Ed: The Vincent Adultman material represents something I really like about the show, which is its willingness to commit to a joke far past the point where most shows - and particularly most animated shows - would have dropped them. The idea of two kids pretending to be an adult is one that has been done a ton of times in the past, but the idea of having someone carry on that charade and no one realising what is going on is pretty novel, especially since, as you say, it happens as things are getting quite serious, and the show does seem to imbue a certain degree of substance into his relationship with Princess Carolyn.

It's an approach which is probably best exemplified by the Hollywoo sign. If The Simpsons did a plotline where Homer removed the D from the Hollywood sign, it'd be forgotten about by the next week. On BoJack Horseman, it becomes part of the fabric of the show, in ways both big and small, from then onwards. I really feel that "consequences" are one of the core themes of the show.

Lewis: Of course that's what marks it out from all of the other animated shows: it's 100% committed to narrative advance rather than sitcom resetting. Which is ironic for a show about someone who starred in one of those sitcoms that had no narrative progress. I guess that's it about BoJack though, it's a story about a man trapped in inertia who finally starts moving, so I guess that's reflected even in the throwaway gags.

Ed: What were your thoughts on the Christmas special? I was certainly glad to get more of the show, and I thought that having it be basically an episode of Horsin' Around gave it a reason to air separately from the main season, but it felt so separate, with no real indication of when it took place in relation to the chronology of the show, I found it a bit dissonant.

Lewis: The Christmas special was sort of this Mystery Science Theater thing, but with not enough of the commentary to make it funny and a lot of a show that was, within the context of the show, not very good. It was diverting, but essentially it was like they put an episode of Everyone Loves Hypno-toad on Netflix.

Ed: The Christmas special was problematic for me because, as much as I love the show, I don't feel like it has built up the kind of relationship with its own mythology to justify that sort of a diversion, at least not yet. Parks & Recreation did essentially the same thing in their final season where they made one of the last episodes an episode of the kids TV show that Andy (Chris Pratt) hosts, and it was a pretty bold and strange choice to make considering they only had two or three episodes left, but it felt like the show had built up such a complete world by that point that seeing a fictional show presented as an actual episode felt natural. It also helped that they committed completely to the conceit and showed nothing but the Johnny Karate show, rather than the half-episode, half-commentary thing BoJack tried to do.

How do you feel about the show as a satire of Hollywoo? I find some of that stuff very broad, particularly the whole subplot about filming the Secretariat movie, but I feel that it captures the sense of isolation that comes with success really well. I've taken to thinking of it as a good version of Entourage, one in which there are actual stories and stakes in each episode. It also reminds me a lot of This Book Will Save Your Life by A.M. Homes, which is also about a guy who has stopped really engaging with the world in a meaningful way but who is then shaken out of his lethargy. BoJack Horseman really mines that vein for a lot of pathos once it starts delving into his back story, how he basically has the life he has because he walked away from the love of his life and screwed over his best friend.

Lewis: I think it fits well in with those films that are sort of about the landscape of Holywoo as much as the industry. It reminded me a bit of Seven Psychopaths and 2 Days In The Valley and all of those things where people wander around in this sterile, perfect, awful landscape. Curb too, of course. Specifically the idea that people who come from the East Coast make it to this aspirational place and then are ultimately really awkward in their skin once they get there.