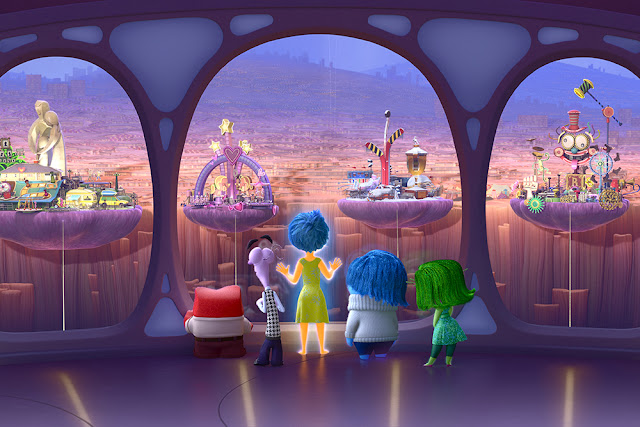 Joy (Amy Poehler) is the dominant emotion in the mind of Riley (Kaitlyn Dias), an eleven year old girl who loves hockey, being a goofball, and her family. Alongside Sadness (Phyllis Smith), Disgust (Mindy Kaling), Anger (Lewis Black) and Fear (Bill Hader), Joy is responsible for guiding Riley through her life in Minnesota. When Riley and her family up sticks and move to San Francisco, Joy finds herself unable to control the wave of negativity stemming from Riley's sense of dislocation and loneliness. When Joy's attempts to control the situation result in her and Sadness being inadvertently locked out of the mind's command centre with no easy way back, Riley's emotional well-being starts to become dangerously fraught, and Joy and Sadness need to figure out a way back before any permanent damage is done.

Inside Out feels like a natural continuation for Pete Docter, who co-directed the film with Ronaldo Del Carmen, whose previous work for Pixar featured isolated moments of piercing emotional devastation. Monsters, Inc. ended with one of the most deliriously sweet shots in animation history, while merely mentioning the opening of Up is a surefire way to get almost anyone who has seen it a little misty-eyed. Inside Out builds on that history by consisting of almost nothing but those moments. From its opening scene, in which we witness Riley's first moment of consciousness and the creation of her first Core Memory (seeing her parents' face for the very first time), underscored by Michael Giacchino's plaintive and melancholy theme, it's pretty much 94 minutes of precision hits to the emotional solar plexus.

What's remarkable is not that it manages to wring tears out at a pretty steady rate - this is Pixar, after all - but that it does so while also being one of the studio's most imaginative and consistently funny films. The inside of Riley's mind offers plenty of opportunity for visual gags and puns, such as the literal Train of Thought which travels around her headspace and offers one possible point of salvation for Joy and Sadness, or the idea of dreams being created by a film studio in Riley's head. It also has room for more esoteric scenes, such as one in which Joy, Sadness and Bing Bong (Richard Kind), Riley's old imaginary friend who now wanders around her long-term memory with nothing to do, enter an area dedicated to Abstract Thought, which results in their bodies changing in all sorts of odd ways. There's a lot of wit and invention on display throughout the film, and its world is delivered in vibrant and gorgeous visuals befitting Pixar's position at the apex of CG animation.

One of Inside Out's more subtly impressive achievements is the way in which Docter and Del Carmen give weight to their action. It's easy to imagine a scenario where a story set entirely within someone's mind could come across as weightless and without consequence, but they give Joy and Sadness' actions   meaning both within Riley's head and in the real world. Aspects of Riley's personality are given physical form as islands that they have to travel to in order to return to Headquarters, an admittedly cute touch which also adds a ticking time bomb element to the plot as Riley's distress causes each of the islands to crumble and fall apart. There's also, in being forgotten, an equivalent of death for the characters, so they can actually be imperiled by their adventure. All this makes for interesting world-building, and serves to make sense of a concept that could be a little too abstract or, if you'll forgive the pun, heady for its own good.

More important than the Riley's Head aspects of the film, at least in terms of ensuring that there are stakes, are the ways in which the adventure manifests itself in the real world. The script finds plenty of opportunities to mine comedy from Anger, Disgust and Fear struggling to manage things and mimic Joy in her absence, but the real meat of the story comes when they stumble upon the idea of having Riley run away from home. At that point, the film doubles down on being grounded in the emotions of an adolescent girl by taking her unhappiness and confusion to a logical place. Even though the stakes of the film are relatively small, especially compared to most modern blockbusters, that makes them all the more keenly felt. Boiled down to its basics, Inside Out is the story of a young girl deciding whether or not to take a bus ride, but the terror involved in making that decision, and the irrevocable ramifications of it for Riley, her family and her emotions, make it feel like the end of the world.

A lot of that comes across through the voice actors, who all give the film a rising sense of panic and dread as Riley's emotional state becomes harder and harder to manage. They also turn in performances which fit perfectly with many of their established personas. Kind imbues Bing Bong with a mix of silliness and sadness that reaffirms why he is one of the best comedy actors currently working; Black gets plenty of opportunities to be apoplectic over just about everything; Kaling plays essentially a Heather inside Riley's mind, constantly obsessed with what looks good to other people. Smith is probably the comedic highlight of the film, in part because she gets some of the best lines, but also because she manages to make running jokes about what Sadness likes (her favourite memory is of a dog dying at the end of an unnamed film) feel fresh. She also brings consistency to a character who initially seems like she might be the villain of the film, at least judging by the way Joy treats her as an aberration that needs to be suppressed, and takes some time to really come into focus.

It's Amy Poehler who dominates the film, however, which is only to be expected since Inside Out is largely Joy's story. Though in a broader sense the film is about the coming of age of a young girl, it's Joy's arc that forms the core of the film as she comes to realise that Sadness has a place in Riley's life. It's a dynamic reminiscent of that between Woody and Buzz in the first Toy Story, in that the overly controlling leader of a group gradually realises that they are the problem, rather than the person they are fixated on, and that their actions are hurting someone they care deeply about.

Poehler's performance is utterly wonderful in that regard. She manages to make Joy's desire for Riley to be happy all the time, regardless of what is going on in her life, feel natural to the character without seeming self-conscious about it, then switches to raw emotion when it comes to the character's heartbreaking moment of realisation. That turn establishes a link with Toy Story 3, since both film's get their emotional power from depicting the ways in which parents (represented by toys or anthropomorphic emotions) perceive their children. Poehler's delivery of the line "I only wanted her to be happy" is one of the most wrenching moments in a film that finds plenty of opportunity to yank the heartstrings.

It's hard to say after one viewing if Inside Out is Pixar's best, but the fact that it even enters into the conversation speaks volumes about how great it is. It's relentlessly clever, inventive, funny and moving, and driven by a genuinely important message for a family film: that sadness is an important and valuable thing. It's a straightforward and simple message, but as is often the case with Pixar, the beauty lies in its execution.