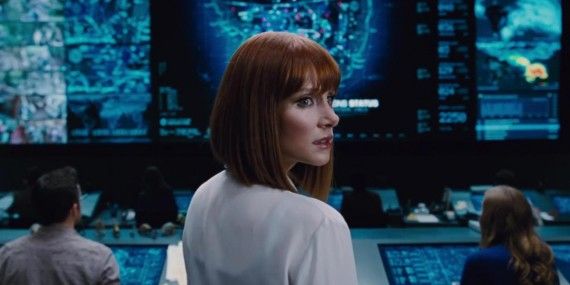 Twenty-two years ago, a man named John Hammond had a dream. A dream of opening a park filled with dinosaurs, resurrected by the wonders of science, and open for all the world to see. That dream went tragically sour when the actions of a rogue employee led to the park's security measures failing, several deaths, and the apparent abandonment of Isla Nublar to its prehistoric inhabitants. Yet the magic of Hammond's vision - and its undeniable potential for huge profits - meant that people would try again, so now his park - renamed Jurassic World, no doubt as a canny bit of rebranding to move away from that whole rampaging dinosaurs thing - is a glistening hybrid of Disney World and SeaWorld.

Now that the park is up and running, however, it has to make money, and the pursuit of higher revenues has led its corporate masters to push for the creation of new dinosaurs to wow the crowds. Since no one in these movies ever heeds the old adage about people not learning from history, or considers Ian Malcolm's spiel about "could" and "should", things with their new super-dinosaur go about as well as you might expect.

There are a number of scenes in Jurassic World, the third sequel to Steven Spielberg's original blockbuster, where the characters take surprisingly self-lacerating jabs at the very existence of the film they're in. One scene in particular finds Claire (Bryce Dallas Howard), the Operations Manager of this modern, ultra-sleek version of John Hammond's dream, talking to potential sponsors about how visitors to the park get bored of seeing the same old dinosaurs over and over, so they have to create new ones by lashing together DNA of multiple species, giving the crowds bigger scares and "more teeth" for the price of admission. It's a surprisingly pointed acknowledgment on the part of director and co-writer Colin Trevorrow of what his job is as the man behind the fourth film in a massive franchise. We've all seen what a T. Rex can do (and it's hard to find Velociraptors all that scary after you've seen Sam Neill placate them by blowing into a skull) so what choice does Trevorrow have but to invent new dinosaurs like the Indominus Rex?

In a later scene, Lowery (Jake Johnson), a member of the crew that monitors the operations of the park, mocks the notion of letting corporations sponsor dinosaurs by asking if they will some day play host to the majestic Doritodon, all while wearing a vintage Jurassic Park shirt that he bought from Ebay. Considering that the film very prominently displays the Beats headphones worn by Zach (Nick Robinson), one of two brothers who are sent to Jurassic World to visit Claire, their aunt, by their troubled parents (Judy Greer and Andy Buckley) so they can spend some time together, and features dozens of shots of smooth-running, dinosaur-evading Mercedes vehicles, it's hard not to read this as an expression of frustration. Having made a splash with his debut, the independent, sci-fi inflected romance Safety Not Guaranteed, Trevorrow's swapped a world of scrabbling for funding for one where he has to make sure Starbucks and Pandora and Coca-Cola get their moment to shine amidst the carnage.

It's harder still to tell if this anti-corporate attitude is a genuine point that the film is trying to articulate, or just a case of paying lip service to the idea that focus groups and sponsorships are toxic to creativity as a way of excusing Jurassic World's rampant product placement. It's a problem that runs throughout the film which, when it isn't delighting in the escalating chaos caused by Indominus Rex's escape from its paddock, seems pretty unsure of itself. About the only thing it seems certain about is that the militarization of science, embodied by Hoskins (Vincent D'Onofrio), a mercenary who wants to use the raptors trained by ex-military hunk Owen (Chris Pratt) in combat, is probably pretty bad, but everything else is up for grabs.

When it comes to gender, the film seems especially nonplussed. The film displays a lot of empathy for Claire as a woman in a male-dominated corporate environment who has to work harder than anyone around her, and who has had to subsume any desire for a romantic or family life as a result. The story also offers plenty of opportunities to demonstrate that she's every bit as tough and resourceful as Owen. But it also insists on having Claire run around in high heels. That's a pretty standard (sexist) action movie trope, but one which is made all the worse by the fact that the film has Owen point out how ridiculous it is, then does nothing interesting with that information. (Maybe they were trying to make the action movie equivalent of the old line about how Ginger Rogers could do everything that Fred Astaire did but backwards and in high heels.) In general, the script has a crippling inability to pay off things it sets up (such as a repeated motif of Zach staring at girls, despite having a doting girlfriend back home, which goes absolutely nowhere), suggesting that it was spliced together from untold drafts written in the fourteen years since Jurassic Park III came out.

Another female character, who is introduced very briefly and who only says about eight lines, is given the most violent and protracted death in the whole film (possibly the whole series), rather than getting the kind of quick, largely off-screen death afforded to the film's villains. Since the character is barely established and doesn't really do much to affect the story, I came away thinking that she was being punished for being a woman, since that was her only defining characteristic. It's the one unequivocally ugly moment in a film that otherwise aims to be a pretty accessible and family friendly romp.

Yet for all its thematic confusion, and the fact that most of its characters are so thinly drawn that they make little sense - such as Simon Masrani (Irrfan Khan), Jurassic World's current owner, who veers from being the bearer of Hammond's flame of daffy idealism to a hard-nosed numbers man from scene to scene - Jurassic World is immensely enjoyable. Like the first film, it places a lot of importance on the need to wow the audience through the grandeur of its creatures, which it mixes with awe at the scale of the park itself, and Trevorrow finds plenty of opportunities to marvel at the wonder of seeing dinosaurs brought back to life through science (well, CGI). The film also allows space to make fun of theme parks, particularly the way that even something as amazing as a place filled with extinct creatures can become boring if you see them every day.

The performances from the main cast are also pretty fun, with Howard and Pratt making the most of their bickering odd couple dynamic, while D'Onofrio is suitably loathsome as someone who truly does not understand what he is meddling with. The moment when he realises that he has no grasp on the situation, which is brought about by a Aliens-inspired hunt for the Indominus, is particularly delicious. The film also does a lot to sell Pratt as this generation's Harrison Ford, not only by positioning him as the Han Solo of the story, but by also having him perform a kind of Reverse Indy by diving under a slowly opening door. Burt Macklin would be overjoyed at this turn of events.

Jurassic World lifts pretty liberally from original Jurassic Park author Michael Crichton's Westworld in its depiction of how a well-run yet clearly dangerous attraction can spiral out of control. Indominus' initial escape is bad enough since it entails a certain amount of death and destruction, but the domino effect of that escape escalates pretty beautifully as the film goes on. More importantly, it draws from Spielberg's playbook as often as possible, which is a solid route to success, and includes plenty of respectful nods to the original that it actually bothers to integrate into the plot. Having Zach and his brother Gray (Ty Simpkins) discover the abandoned visitors centre from the first film is a nice, oddly moving touch, but Jurassic World takes that extra step of making sure that the discovery impacts the plot in a somewhat meaningful way. There's a heavy sheen of nostalgia on Jurassic World, but it's its own movie, for better or worse.