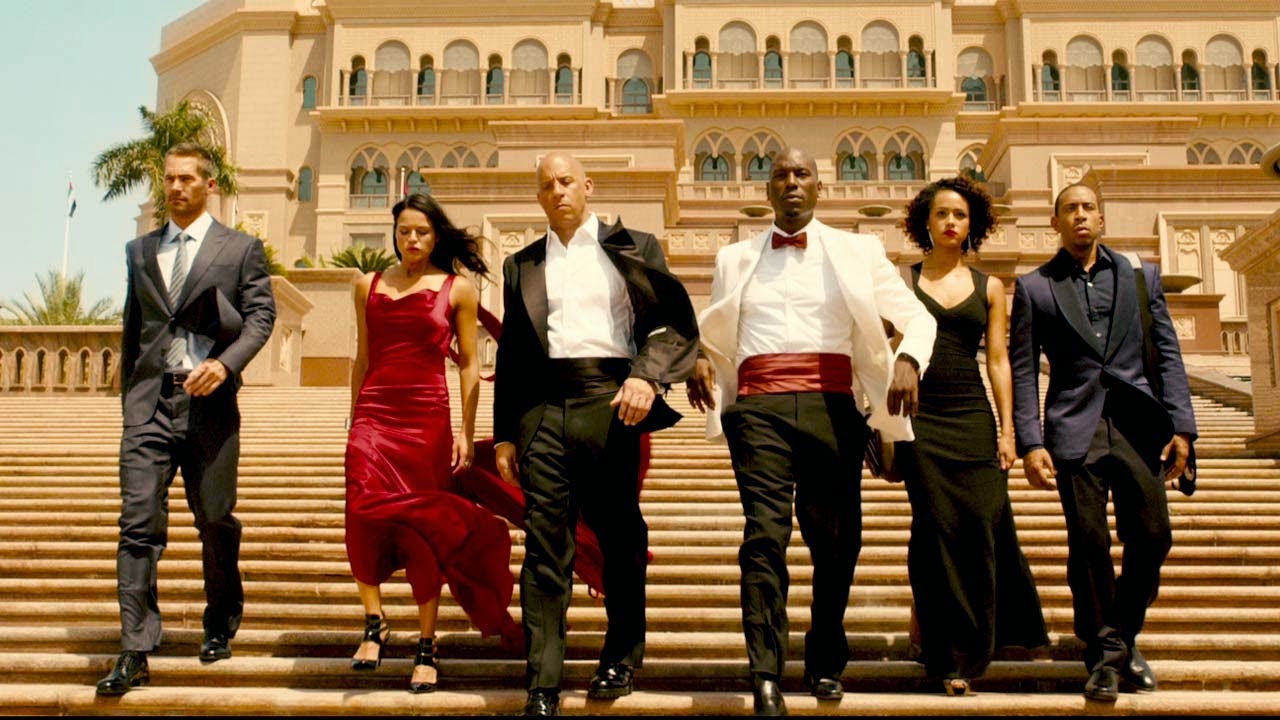 Note: This review contains spoilers for the fate of Paul Walker's character, Bryan O'Conner. These have been hidden using white text, so highlight the blank space to read them if you have seen the film or don't mind having that part of it revealed.

Since the Fast and Furious franchise came roaring back to popularity with the fourth entry in the series, the tersely worded Fast and Furious, which followed the thought to be franchise-ending disappointment of The Fast and the Furious: Tokyo Drift, the series has gradually, if not subtly, reinvented itself. What started as a series focused primarily on illegal racing with various crime elements added to link the races has at this point become an odd hybrid of heist film and spy thriller, one in which a group of low-level car thieves are also martial arts masters. It feels as if it cross-pollinated with Vin Diesel's other early '00s hit xXx, with the end result resembling Pierce Brosnan era Bond movies, but with the archness replaced with aching sincerity.

Furious 7, the latest (and angriest) entry, completes the transformation. Dominic Toretto (Diesel) and his crew find themselves involved in a globe-trotting adventure that sees them assisting the US government, represented by the unflappably cool Mr. Nobody (Kurt Russell, who is introduced with a shot loaded with such awe that it seems like director James Wan couldn't quite believe that he was getting to make a movie with Kurt Russell). In a bit of quid pro quo, Nobody wants Dom and his team to extract a hacker named Ramsey (Nathalie Emmanuel) from the hands of Jakande (Djimou Hounsou), a terrorist who wants to use a surveillance program Ramsey created called God's Eye. Once Ramsay and God's Eye are secure, the government will let Dom use it to track down Deckard Shaw (Jason Statham), the brother of Fast & Furious 6's villain Owen Shaw, who has vowed to kill everyone that Dom loves as revenge for the events of the previous movie, starting with Han (Sung Kang), whose death midway through Tokyo Drift was revealed to be caused by Deckard at the end of the previous film.

For a franchise whose pleasures are fairly straightforward - fast cars doing impossible things in beautiful locations; scantily-clad women moving in slow motion while dance music plays - the continuity of the films has become surprisingly convoluted. That's at least partly a side effect of the evolution of the series from one genre to another, the fact that the last three films were prequels to the third film, and the need to justify upping the ante in terms of stunts from film to film. The finale of Fast Five, which saw the team working together to drag a huge safe through the streets of Rio, set a high benchmark for ridiculousness that the subsequent films have been forced to exceed. As Roman (Tyrese Gibson) points out, last time around they had to drag down a massive cargo plane and destroy a tank using their cars, and this time they have to skydive out of a plane in their cars (naturally), then steal a sensitive piece of technology by driving a different car through the windows of various skyscrapers in Abu Dhabi. The connective tissue between those set pieces can feel pretty arbitrary, and that arbitrariness adds to how convoluted everything feels: things doesn't necessarily have to make sense so long as you can more or less justify why the characters are moving from one action scene to the next.

That, to me, is where the series' agreeably goofy charm comes from. There's an understanding between filmmakers and audience that what you're about to see probably won't stack up to much scrutiny, but it will be fun. (Not to mention that, when you start with a scene of Jason Statham beating up The Rock, rather than having his skull crushed like an overripe melon, you know you're in a realm of complete fantasy.) Aside from the action sequences, which are ludicrous both in their execution and in the way that Deckard somehow manages to work his way into them at every opportunity, there's a lively bonhomie between all the cast members that underpins the series' long-running theme of Toretto's crew as a family, something which is highlighted when Ramsey astutely points out that the only things that can keep a crew together are fear or loyalty, and she can't see any fear in them. At times the easy rapport of the stars and the running jokes, such as the way everyone constantly makes fun of Roman, make it feel like a long-running sitcom which is occasionally broken up by Tony Jaa doing crazily acrobatic moves.

Behind the camera, James Wan, the horror director behind Saw and The Conjuring, takes over from Justin Lin, who had previously steered the series from Tokyo Drift up until Fast & Furious 6. While he doesn't have quite the same clean and comprehensible style that Lin brought to the series, Wan does have a knack for capturing chaos. In his use of fast, associative editing and flashy camera tricks - including a repeated motif in which the camera flips over whenever a character is body slammed over a chair or through a table, which happens a lot - his work recalls the work of the late Tony Scott, or at least the amped up parody of Tony Scott's style that Edgar Wright utilised in Hot Fuzz. He also has a good handle on the inter-character relationships, such as Bryan's (Paul Walker) conflicted feelings over leaving the life of high adventure behind to settle down in domesticity with his wife Mia (Jordana Brewster) and young son, or Dom's attempts to help Letty (Michelle Rodriguez) recover her memory, which she lost following the events of Fast and Furious. The latter subplot is especially silly and melodramatic, but it more less fits within the tone of the overall film, which is focused on creating a fun and goofy atmosphere.

More surprising is how well Wan and his crew handle Paul Walker's death. His passing casts a shadow over the whole film, particularly in the case of lines like "no more funerals" which have an unfortunate undercurrent now, but Wan and screenwriter Chris Morgan never let it get in the way of telling the story. Their solutions to Walker's absence, which included using his brothers as body doubles and CGI, are well-implemented and there's never that eerie Livia Soprano feeling to them. Most importantly, and here's where the spoilers start, they let the cast say goodbye to Walker in a way that is heartfelt but never feels like it is toying with the audience's emotions more than is strictly necessary. They let Bryan go off into a new life with his family, and Dom delivers a farewell tribute to his friend which doubles as Diesel providing a eulogy for his. It reminded me of the NewsRadio episode "Bill Moves On," in which the cast paid tribute to the deceased Phil Hartman by having their characters say goodbye to his onscreen persona, and the effect in Furious 7 is similarly affecting, albeit delivered through the prism of the series' lunkheaded sentimentality. It's a touching capstone to the film which admits that things are going to be different, and that the future is uncertain.

On the whole, Furious 7 is sloppier than the last two films and you often get the sense that Wan's handle on the chaos and scale of the whole enterprise is not as assured as Lin's was, but it's still a riotous good time and a genuinely poignant tribute to an absent friend. It's something of an Irish wake, but with alcohol substituted for dropping cars out of a goddamn airplane.