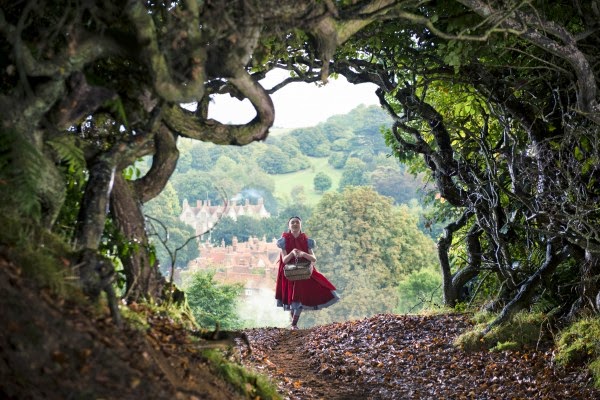 Into The Woods, Stephen Sondheim and James Lapine's great stage musical in which a host of fairytale figures - Red Riding Hood and her wolf, Cinderella, Rapunzel, their respective princes - all meet in the titular forest, after which their stories collide and their Happily Ever Afters go askew, is not the easiest play to bring to the screen. Like most Sondheim shows, it's heavy on rapidly delivered lyrics full of dazzling wordplay ("Son we've no time to sit and dither/while her withers wither with her"), which means that movement is understandably limited, and therefore not massively cinematic. And much of the charm of the original show lies in the limitations of realising a fantastical world onstage. Presenting an actual forest populated by magical things, rather than allowing audiences to imagine them with a canny bit of stagecraft, makes it all look a little more ordinary, while also making some of the more traditional visual choices - such as the way that Johnny Depp's Wolf looks like someone with whiskers glued on to his face - look weird and out of place.

The greatest compliment that could be paid to director Rob Marshall is that he more or less gets out of the way and lets the strength of the material do the heavy lifting. He's adapting a great show, so it's understandable that he would just let the songs and the cast get to work, and there are stretches of the film where that approach more or less holds together. Some of the musical sequences - particularly the hilarious "Agony", in which Cinderella's Prince (a gloriously hammy Chris Pine, who plays him with the voice of Richard Burton and the swagger of Zapp Brannigan) and Rapunzel's Prince (Billy Magnussen) strut around a waterfall and sing about how difficult their lives as rich, handsome princes are - work very well because there isn't much you can do to mess them up. This is also true of "No One is Alone", which remains utterly heartbreaking, and buoys the film's otherwise unfocused last act.

Marshall's hands-off approach is also to the film's detriment since, while Sondheim's words remain as clever and at times heartbreaking as ever, the tone is too indebted to the leaden somberness of post-Lord of the Rings fantasy filmmaking for the material. The musical has a dark sense of humour and a playfulness that flickers throughout the film, but Marshall makes no great effort to bring it to life, and he instead shoots most of the non-musical scenes with a degree of seriousness that makes the moments of intentional comedy seem accidental. It also harms the more dire moments in the story since the humour plays a big part in making the death and unhappiness of the second half more powerful: The deaths in Marshall's version are treated so offhandedly that it's often unclear what has actually happened.

Some of the casting choices, meanwhile, seem to have been made for the purpose of verisimilitude (in a story which, it is worth pointing out, is populated entirely by characters from fairytales) but end up blunting the humour associated with some of the characters. This goes beyond stunt casting like Depp (who is not particularly good but is only onscreen for less than five minutes) and Meryl Streep as the Witch (who is at least better here than she was in Mamma Mia!, but doesn't have the right balance of humour and malice) to the casting of the younger characters, particularly Jack (of Beanstalk fame) and Red Riding Hood.

Most the jokes surrounding Jack's (Daniel Huttlestone) role in the play come from him being mocked by his mother (Tracey Ullman) for being stupid and feckless, and when Jack is played by an adult those jokes come across as goofy, and are more to do with the idea that he needs to grow up than anything else. When those jokes are aimed at someone who actually is a kid, the jokes and the physical beatings verge on child abuse, and it's hard to laugh at people repeatedly mocking a child. It doesn't help that Huddlestone doesn't have a strong enough voice for the role, and comes across as someone who wandered in from an Oliver! audition.

Red Riding Hood (Lilla Crawford) is an even bigger problem since she has to be part of a deconstruction of the Red Riding Hood/Wolf dynamic, one which teases out the sexual undercurrent of that relationship through the overtly predatory "Hello, Little Girl". The film version tones down the sexuality of that song considerably, but because it still features 51 year-old Johnny Depp menacing a very young girl, what little sexuality remains brings with it a much worse connotation. It all ends up feeling a bit Maurice Chevalier and becomes uncomfortably skeevy.

And yet the underlying strength of the material, and the skill of the cast, stops Into the Woods from being an irredeemable mess. Pine is the clear standout, but Anna Kendrick is also great at making Cinderella a believably indecisive dreamer, while James Corden and Emily Blunt have fantastic chemistry as The Baker and The Baker's Wife, the couple whose desire for a child sets the whole thing in motion. Blunt is especially great - funny, sexy, a little bit unsure of herself - and if nothing else the film is, along with her work in Edge of Tomorrow, a great demonstration of her range. Into The Woods is far from a great film, but it is a decent approximation of a great musical, which is about the best you could hope for from the man who bungled Chicago to Oscar-winning effect.