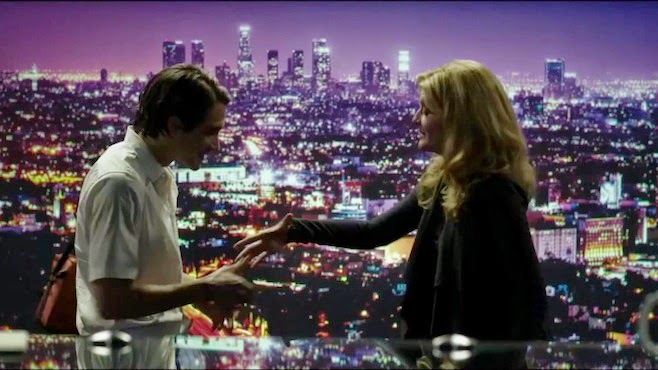 Lou Bloom (Jake Gyllenhaal) is a scumbag in search of a calling. He spends his days educating himself via the Internet and his nights stealing copper wire. After a semi-successful evening - he sells his haul but is rebuffed when he applies for a job with the very people he just sold clearly stolen goods to - he spots a flaming car by the side of the road and stops to look. He sees some cameramen filming the aftermath, and learns that they sell the footage to local news stations. Inspired, he buys a camera and a police scanner (funded by stealing a high performance mountain bike) and starts his own freelance business filming crime scenes in order to sell the footage to an L.A. station run by Nina Romina (Rene Russo). Unsurprisingly given his other work, Lou goes to extreme lengths in order to get the best footage possible.

It's tempting to call Nightcrawler a satire, given its focus on malfeasance in the media, but doing so both elevates and diminishes it. Calling it a satire makes it seem a lot grander than it is, and makes its sleazy, discomforting pleasures even more tawdry in comparison. It also makes it look horribly broad, since the things Lou does in pursuit of a sale - from moving bodies at a crime scene to form a perfect tableau to deliberately withholding information from the police - are so obviously monstrous. Yet Lou is so specific in his mannerisms, with his plastic grin and self-help guru affirmations, that it doesn't have the metaphorical qualities of an allegory. It's less an indictment of the modern media than it is a character study that uses it as a backdrop.

At that, Nightcrawler is very effective. The entire film, barring a thrilling car chase, boils down to Lou trying to convince other people to do what he wants them to through a mix of business speak, threats hidden beneath inane chatter, and a thin veneer of professionalism. There's a bland amorality to him that makes him seem naive or deadly, depending entirely on whether he perceives you as a threat, or if he thinks he has something he can use against you. The Los Angeles of Nightcrawler is, thanks to beautiful cinematography from Robert Elswit, a dark and eerie dreamworld, but it's also an über-capitalist nightmare. It's a place drenched in desperation, where the desire to eat or keep your job is enough to make you prey for someone like Lou.

Lou twists the free market dynamics of the business to his advantage. When dealing with Nina, he uses his footage as leverage to forge a professional and personal relationship that is manipulative, exploitative and one-sided. While working with his driver/intern Rick (Riz Ahmed), he dangles the possibility of promotion (within a company that is made up of two people) as a way of keeping the poor, nearly homeless man in check, even as he uses his profits to invest in more expensive equipment and a flashier ride. And his rivalry with another nightcrawler's (Bill Paxton) company is cutthroat to say the least. Any sign of weakness is all it takes for Lou to press his advantage, and any crime scene - even ones where the crime is still in progress - is a business opportunity.

Jake Gyllenhaal plays Lou Bloom as the kind of person who practices smiling in the mirror. In his calm insistence on his own rightness and his tendency to talk like someone who has read the complete works of Tony Robbins, Lou  comes across as a twenty-first century Rupert Pupkin or a greasy Tom Ripley. But what makes him uniquely awful is that he's a Rupert Pupkin that people take seriously. Writer-director Dan Gilroy gives Lou lots of speeches in which he lays out exactly what he wants, couched in the language executives use when they don't want people to realise they're full of shit, and Gyllenhaal turns every one of them into an exercise in slippery ethics and fluid performance. He handles Gilroy's verbal gymnastics with aplomb, and makes it all too easy to see why people would allow someone like Lou to insinuate himself into their lives.

Russo, Ahmed and Paxton are all great in their supporting roles - Russo, in particular, does a great job at suggesting Nina's desperation for ratings subtly - but Gyllenhaal dominates the film. Based on this and his excellent work in the otherwise dreadful Prisoners, he seems to be coming into his own as an actor who specialises in driven obsessives on either side of the law.

Nightcrawler is an incredibly sleek, fun and engaging wade through the sleazy side of independent journalism and economic desperation. You'll want to take a long hot shower after spending any length of time with Lou Bloom and his mad staring eyes, but like Nina and Rick, you'll find it very hard to turn away.