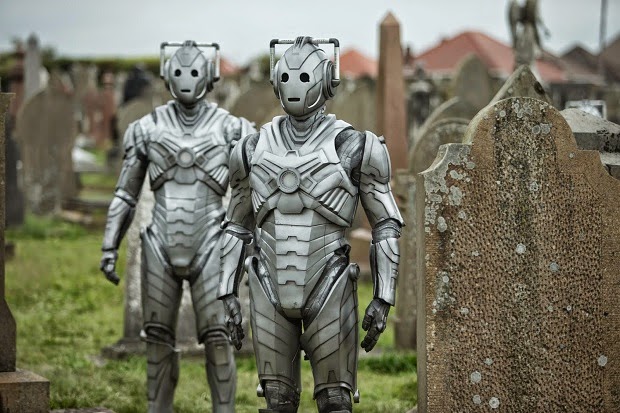 Last time, I wrote about how the problem with a lot of Doctor Who two-parters is that the first halves tend to be much better than the second halves. It's not hard to see why: the first episode has the advantage of getting to escalate a crisis for The Doctor without the burden of having to resolve anything, while the second has to deal with the immediate fallout of its predecessor before leaping into its own story. In drama, raising questions is fun and easy, but providing satisfactory answers is frustrating and difficult.

That pattern aggressively asserted itself with this final episode of Peter Capaldi's first series in the blue box, as the show followed the dark, weird and unsettling "Dark Water" with the much sillier "Death in Heaven." The two episodes are so dissimilar in tone that it's hard to believe the same creative team was behind both, but they do in fact share the same writer (Steven Moffat) and director (Rachel Talalay). That's not to say that it is a terrible episode, because there were some really strong and emotional moments in it, just that it falls so flat after the previous one that it can't help but be disappointing.

"Dark Water" ended with a number of revelations and cliffhangers. The Doctor had discovered that Missy (Michelle Gomez) was a regeneration of his old friend/nemesis The Master, and that she had created an army of Cybermen from the bodies of the recently deceased, while keeping their consciousnesses (including that of the dearly departed Danny Pink) in a large spherical storage unit. Clara, meanwhile, was being menaced by one of those same Cybermen immediately after she had completely an emotionally fraught conversation with Danny's consciousness. It's the second plot strand that the episode starts with by having Clara talk her way out of being vaporised by claiming that "Clara Oswald" is a made up persona, and that she is actually The Doctor. Cue cutesy opening credits in which Jenna Coleman's eyebrows replaced Peter Capaldi's and she gets first billing.

Rather than pulling at that thread a little more to see where it goes, we jump back to The Doctor and Missy, who are quickly taken into custody by Kate Stewart (Jemma Redgrave), Osgood (Ingrid Oliver) and the Agents of UNIT, but not before Missy orders her Cyberminions to fly into the sky and detonate, releasing a black cloud which then causes the dead to rise from their graves as newly-minted Cybermen. Within minutes, Missy has created a vast of army of killer robots, one which will swell its ranks with those it kills. As The Doctor says once he is (supposedly) safely aboard a UNIT plane, "How can you win a war against an enemy that can weaponise the dead?"

Right there, you have two plots that could have made for a very compelling episode. Clara, separated from The Doctor and forced to fend for herself, has to pretend to be him in order to survive, in effect taking the next logical step from her role in "Flatline." On the other hand, treating The Cybermen as essentially zombies, a connection that is reinforced by the sluggish way the disinterred Cybermen move, would allow the show to continue its habit of shifting between genres from episode to episode. Neither idea is explored, though, and gets dropped almost instantly in favour of other, even less developed ones.

Freed from having to pretend that she is someone else, Missy unleashes her inner lunatic on her captors by picking the lock on her handcuffs, taunting Osgood, then killing her. Michelle Gomez has been doing good work with Missy over the course of the series, and it was fun seeing her get to let loose and be diabolical and insane, but her characterisation basically followed the standard model of trying to make every villain into The Joker from The Dark Knight (there were also strong shades of Andrew Scott's version of Moriarty from Moffat's other show). Missy's repeated claims that she and The Doctor were basically the same really underlined that connection, since "we're not so different, you and I" is pretty much the default approach to making someone into a character's nemesis in one easy step. The episode eventually took it to a more interesting place by having The Doctor doubt his sense of self when presented with the chance to control the Cybermen army and use them to solve every problem in the Universe by effectively conquering everything, but that doesn't stop the basic premise from being pretty stale.

Meanwhile, the saga of Clara and Danny takes another heartbreaking turn. Having had his consciousness uploaded into a Cyberman, but still having access to those troublesome emotions of his, Danny is able to exert control over his body, which allows him to rescue Clara from other Cybermen, then confront her in a graveyard. After goading her into saying that The Doctor is her best friend and the only man she would never lie to, Cyber-Danny reveals himself to Clara and asks her to turn on the inhibitor that would delete his emotions (making him basically the anti-Data). It would stop him from being in pain, but it would effectively kill the Danny that Clara knew and loved.

While I was unengaged by the Doctor/Missy part of the episode, I found the Danny/Clara stuff really very sweet and affecting. The great thing about the limitless possibilities of Doctor Who is that they can force characters into impossible situations while remaining grounded in heightened yet distinctly real emotions. Clara's choice is between keeping the man she loves alive but in a state of constant suffering, or ending his pain but losing him forever. Take away the robot suit and the laser cannon, and that's a situation that most people will experience at some point in their lives, but the fantastical accoutrements allow the show to engage with that subject in a way that is more openly, almost operatically emotional. Considering how much effort the show put into depicting their relationship as a warm and loving one, Clara's choice had a lot of weight behind. It also tied into her development over the course of the series, and hearkened back to what The Doctor told her in "Mummy on the Orient Express": Sometimes the only choices you have are bad ones, but you still have to choose.

That was more successful than the attempts to draw together The Doctor's experiences from these last twelve episodes to make a cohesive point. (Maybe that's because it was subtle, and did not rely on intrusive clips from previous episodes hammering how the idea that The Doctor has doubts about whether he is a good man.) As I suspected, his disdain for soldiers did ultimately have a point, since his ability to look past it and hand control of the Cybermen over to Cyber-Danny, who in turn orders them to self-destruct, was what ultimately saved the day, but it still felt like a lot of effort expended on a trait that was antithetical to pretty much everything the character has done in the past.

Moffat very nearly managed a hail mary with the final scene of the episode (ignoring for the moment the brief tease for the Christmas special), in which Clara and The Doctor meet in a cafe to say goodbye for the final (skeptical question mark) time. Whereas the rest of the episode was built on bombast and spectacle, the end was built on two people quietly lying to each other. The Doctor thinks that Clara has called him to let him know that Danny has used the Cyberman bracelet to return to the land of the living (boy, that sure is a useful piece of kit) when in reality he sent back the little boy he accidentally killed while he was in the Army, an act so noble I'm wondering if it is possible to give the Victoria Cross to a fictional character. He assumes that, with Danny back in the picture, Clara won't be traveling with him anymore. For his part, The Doctor tells Clara that he has found Gallifrey using coordinates provided by Missy so he is going to go home and help rebuild, when those coordinates actually led to a completely empty part of space. They lie to each other with the best of intentions, hug, then part ways, each broken in their own way.

It's a quiet, deeply melancholy ending that fits the tone of the rest of the series, but felt wildly out of step with the episode that proceeded it. Despite a wild-eyed performance from Michelle Gomez and some lovely grace notes dotted throughout (my favourite being Brigadier Lethbridge-Stewart returning as a Cyberman to save his daughter from falling out of a plane, a plot point that was all the more effective because it happened off-screen) it was a pretty slapdash ending to an otherwise very strong series. This was probably the best run of episodes since Matt Smith's first year, so it's a shame to see it end on something of a sour note. At the same time, it feels appropriate that a year that reminded me of what a vital show Doctor Who can be at its best finished by reminding me how uneven it can be.

- When Moffat eventually hands the reins of the show over to someone else, I hope they get the words "The Doctor Does Not Sky Dive" embroidered on tea towels and hand them out to every member of the cast and crew. That shit is unforgivable.

- So they killed Missy off in a way that seems final, but it's hard to imagine that she'll stay dead. I mean, they didn't really explain how she came back to life in the first place, so it's not like the writers are being particularly strict when it comes to the rules of how a Time Lord dies or does not die. (Maybe next time she'll face off against a female Doctor?)

- When they do bring her back, I hope it's not in a series finale again. I know The Master is meant to be one of the biggest enemies for The Doctor, but so are The Daleks, and they've been brought in for one-off episodes that don't close out the year. I'd like to see them take this version of the character and have her cause trouble for The Doctor in an unimportant episode before disappearing again, like the Batman villain that they clearly want her to be.

- The Doctor says that he could be a king on Gallifrey, or a Queen. Again, the dialogue seems to be saying that The Doctor could be a woman, but it feels like lip service that probably won't pay off for some time.

- Nick Frost shows up at the very end as Santa Claus, which is great casting, but also baffling. The brief teaser for the Christmas special seems to suggest that it's going to be very Aliens inspired, which hopefully means that it'll have a little bite to it.
By Edwin Davies
Labels: Doctor Who, Jenna Coleman, Peter Capaldi, review, science fiction, television, television review
Newer Post Older Post Home