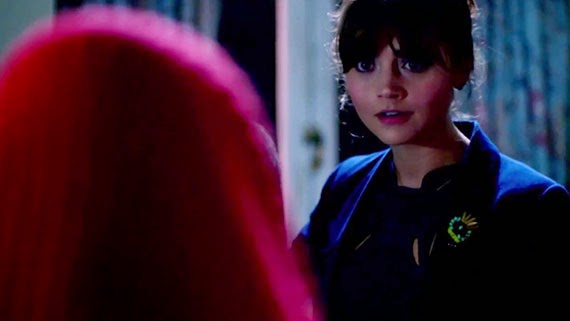 "Did we come to the end of the Universe because of a nursery rhyme?" - Clara

That line may be the perfect summation of the appeal and driving force behind Doctor Who in general, and the Steven Moffat era in particular. The Doctor is a protector and something of a superhero, but he's also an explorer. He's someone who has access to a time machine and has the entirety of existence at his disposal, and he has to make the most of it. In "Listen", the first out-and-out great Capaldi episode (and an episode that already seems destined to be canonised alongside "Blink" and "The Girl in the Fireplace" as a modern classic), Doctor Who explores that adventurous spirit, and how far The Doctor's inquisitiveness will take him, even if all that's driving him is a nursery rhyme and a general feeling of unease.

It also doubles up as the apotheosis of Steven Moffat's interest in telling stories that draw on universal, often childlike fears. The aforementioned "Blink" works so well because it plays with the inherent creepiness of statues, and the sense of dread that most people experience when walking past one and convincing themselves, however briefly, that carved stone might have moved. "The Eleventh Hour", the first episode that aired under Moffat's stewardship, made similarly unnerving hay out of a common sensation; the idea that something is moving at the corner of your eye, only for it to disappear as soon as you look. "Listen" feels like a natural endpoint for his interest in these kind of stories, since he's moved beyond creatures that can only move if people aren't looking directly at them, to one that can't be seen at all.

At least, that's what it seems to be about. The Doctor, in what looks like a moment of profound boredom, becomes obsessed with a dream that he and many others have had at one point in their lives, of waking up in the middle of the night and discovering that there might be something hiding under the bed. The Doctor has started to wonder if it's actually the work of some unseen entity, a creature who has evolved to be the very best at hiding, and whose clandestine presence is what causes people to talk to themselves when they're alone. Clara's dubious about The Doctor's theory, and assumes that he has just spent too much time on his own, but she agrees to let him hook her up to the TARDIS so that they can access her memories of experiencing the dream, hoping to track down its origin and investigate further. They end up finding no real creature, but the episode does reveal a lot of information about The Doctor's past and Clara's future, all the while offering some impressively atmospheric scares.

If the intention of Doctor Who this year is to use each episode to offer a spin on a pre-existing trope or story type, then "Listen" may be their most unusual choice yet. At times it feels like a tribute to The X-Files, right down to the idea of having the female half of the partnership play the skeptic (even though they have plenty of proof that there's some weird shit out there), while at other times it seems to be nodding towards the metaphysical science fiction of Solaris and Stalker. There's no concrete antagonist to focus on, just a familiar moment of terror. Even the times when it seems like they have discovered what is behind the shared dreams are riddled with ambiguity. When The Doctor, Clara and Orson Pink, humankind's first time traveler (if you discount Homer Simpson and Peabody and Sherman) - also who may or may not, but probably may, be a descendant of Clara and Danny - are sitting in a small chamber at the very end of the universe and something starts knocking on the door, it could be the monster under the bed coming to say "hi", or it could be something utterly mundane.

The episode doesn't offer any concrete answer; the shape that appears in young Danny Pink's bed is allowed to leave without being revealed, and Clara forces the TARDIS to take her and The Doctor away before we find out what exactly was causing that knocking at the end of the universe. But the resolution of the mystery isn't important. What is important is that this adventure, one borne out of idle speculation, ends up revealing things about the people who undertake it, and the way that the episode explores some of the unexpected side effects of time travel. By traveling into Danny's past, Clara and The Doctor give him the inspiration to change his name from Rupert to Danny and to become a soldier, a decision which continues to haunt him, and by accidentally entering The Doctor's past and becoming the monster under his bed, Clara creates one of his formative memories, one that allowed him to conquer fear by learning to embrace it.

To go back to The X-Files comparison, this felt like the equivalent of that show's mythology episodes. It was less about the central story, even though it was exceptionably well executed and had some wonderfully expressive uses of colour to represent the characters' growing fear, than it was about the way in which it filled in some details about the characters. By giving us glimpses of Clara's disastrous date with Danny, we learned that he was mainly responsible for digging wells while he was in the Army, but that no one talks about that because whatever terrible thing he did overshadows his other achievements. We also learned that The War Doctor went to a barn in "The Day of the Doctor" because it was where he spent much of his childhood, which is a relatively minor detail, but it's still a nice touch. The idea of making an episode of Doctor Who which is more interested in providing background details while resembling a kind of intergalactic Beckett play might not work for everyone, but it's so unnerving, and such a bold break from what the show usually does, that I couldn't help but be awed by it. It's the very best episode the show has put out in years.

- I enjoyed watching The Doctor talking to the porter of the boarding school where Rupert/Danny was staying in order to provide a distraction for Clara, but I couldn't help but think that there is a very fine line between Peter Capaldi having a quiet chat with someone and Javier Bardem asking someone to "call it".

- Once again I liked Samuel Anderson in his dual role of Danny and Orson Pink, though I'm a little worried that the show is going to drag out the revelation of what he did that he's so upset about to a ludicrous degree. Hints are good at this point since he's only been in two episodes, but if he and Clara are going to be together and their relationship is going to get more attention, which seems likely, it'd be annoying to have it hinted at repeatedly rather than explored in some detail.

- Until doing research for this recap, I'd never bothered to look up whether "Where's Wally?" or "Where's Waldo?" is the original name for that particular book series. Turns out that they're British, and the name was changed for the American market. They're such a bigger deal in the States than they are in Britain that I always assumed it was the other way around.
By Edwin Davies
Labels: Doctor Who, Jenna Coleman, Peter Capaldi, review, science fiction, Steven Moffat, television, television review
Newer Post Older Post Home