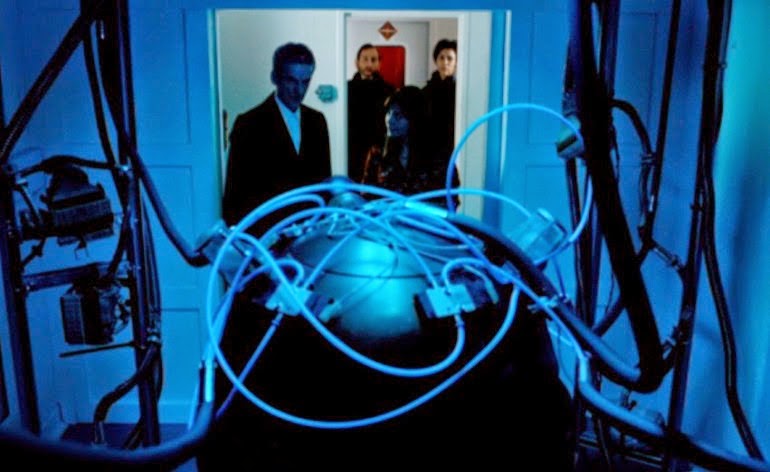 Even though i thought that last week's premiere was merely fine, I imagine that even if i had loved it I would have come away from "Into The Dalek" thinking that it would have served as a better introduction to Peter Capaldi's Doctor. Hell, the opening scene was better than the entirety of "Deep Breath". In a few minutes, you got to see The Doctor being slightly ridiculous - he saves Journey Blue (Zawe Ashton) from Dalek ships while holding a couple of lattes - while also managing to talk Journey out of killing him by, in essence, being a total dick to her. ("You'll probably feel a bit sick. Please don't be." "My brother just died!" "His sister didn't, you're very welcome." "You'd starve to death trying to find the light switch.") Then, when told by Colonel Morgan Blue (Michael Smiley) that, despite being grateful for saving Journey, he still intends to kill him, The Doctor's response is a sardonic "Well, it's a roller coaster with you, isn't it?" All of those lines could have been said by Matt Smith or David Tennant without changing a word, but they'd have probably made the gag a bit more obvious. That dryness, that flipness that Capaldi brings to the character didn't really show up much in "Deep Breath", but it was on full display here and I thought it worked brilliantly.

As that first scene unfolded, I was kind of hoping that the whole episode would focus on The Doctor's solo adventures on The Aristotle, or that it would delay Clara's introduction for a little while. Not because I dislike Clara or the way that Jenna Coleman plays her, but because it would have been a nice change to show the character out on his own, rather than being defined by his companion.

What it did do, and this is what I thought turned this from a potentially humdrum episode to an actually pretty great one, was define who the The Doctor is by pitting him against his greatest enemies: The Daleks. After saving Journey, who in turn saves him by telling the Colonel that The Doctor is, well, a Doctor and they have a patient, The Doctor returns to Earth, picks up Clara after presenting her with the coffee he'd promised to get her at the end of the last episode (which, in terms of the show's internal chronology, was three weeks ago in Glasgow; The Doctor remains perennially terrible at being on time for things), and the two return to The Aristotle to take part in a Fantastic Voyage/Innerspace (delete based on your cultural frame of reference) type journey inside the mind of a Dalek that has supposedly turned good.

Having been shrunk down and deposited inside the body of a monster, The Doctor sets about trying to fix a radiation leak in the Dalek, who he nicknames Rusty, that would allow it to heal, while also trying to avoid the antibodies that show up whenever one of the soldiers accompanying him fires a grappling hook into Rusty's insides. That whole middle section of the episode was fairly weak, not least because director Ben Wheatley didn't really do much to make the action or the dialogue scenes particularly impressive, and it looked like the episode was going to sputter out after a promising start and an at least interesting premise. Then, The Doctor fixes Rusty, but in the process it becomes apparent that the radiation leak was what was causing it to have a change of heart about its own kind. Freed of its ailment, the salt-shaker turns murderous again, and starts shooting up the inside of The Aristotle while The Doctor and his team are still trapped inside Rusty.

Here's where the episode got interesting for me. There's always been a contradiction at the hearts of The Doctor, at least in the rebooted series, since he is a man who on the one hand strives to protect life and talks about the wonders of the universe who also harbours a deep, genocidal hatred of an entire race. He says to Rusty that the defining moment in his life was when he first travelled to Skaro, the Dalek home world, and saw them. From that moment, he knew who he was: The Doctor was, before anything else, not the Daleks. The reversion of Rusty to an evil, human-slaughtering machine seems to confirm all of The Doctor's prejudices, and he seems ready to give up and accept their nature. Then Clara slaps him across the face, and asks him if all they've really learned is that The Daleks are irreversibly evil. That gives The Doctor a sliver of hope, as he realises that because Rusty was able to become briefly moral in his weakened state, that could mean that there is some good inside him that is being repressed by his essential Dalek machinery. If they can break that, maybe they can turn Rusty good for real.

That involves crawling through the tubes that represent Rusty's brain and activating the memory that made him break in the first place: witnessing the birth of a star, and realising that resistance is futile. Not resistance to the Daleks, but resistance to life itself, and the ever-renewing cycle of existence that makes a mockery of the Daleks' mission of destruction. The Doctor, with help from Clara and Journey, manages to rekindle that memory, and he then melds his consciousness with Rusty's by electrocuting himself. (This gets to a bigger problem I have with the concept of this episode: the idea of actually physically going into the mind of the Dalek looks very silly in execution, especially since Rusty's insides resemble one of dozens of generic spaceship sets that the show has used in the past. It's particularly awful in the scenes where Capaldi is screaming at and in front of some pretty obvious green screen. The show has done some very good episodes in the past that have involved characters entering the minds of others, and some sort of virtual reality set-up might have made the whole consciousness-combining stuff feel a little less dumb.) As The Doctor shows Rusty all the wonders that he has seen, it seems like he just might triumph and turn a Dalek good.

Then, Rusty gets a taste of The Doctor's sweet hate for his race, and he becomes a homicidal maniac of a different kind; a Dalek who hates other Daleks. Even though this leads to a scene of Rusty killing dozens of Daleks and saving the humans on board The Aristotle, it's a pretty sobering moment for The Doctor. When it seemed as if Rusty, and by extension all Daleks, was nothing but a killing machine, it seemed to confirm his long-held prejudices. But by opening himself up and letting Rusty look inside him, he learned that he himself is just as destructive and capable of hate as the creatures he has spent millennia fighting. Rusty says that The Doctor is the true "Good Dalek" since he contains their capacity for destruction, even if he also manages to appreciate beauty. This is an idea that the show has played with before, most notably in the Eccleston episode "Dalek", but this felt like one of the few times where the lesson really seemed to hit The Doctor hard, because his feelings towards The Daleks were directly responsible for his failure.

The episode ends with Clara answering a question that The Doctor had posed to her earlier: "Am I a good man?" She says that she doesn't know if he is, but that he tries to be, and that's the point. It's a lovely ending to a visually ugly and structurally uneven episode, but one that brings together some of the show's big themes in a quiet way that comes from the relationship between the characters. To turn what seemed like a fairly cheesy idea into something the ends up being quite moving and thoughtful is the sort of thing that Doctor Who should strive for every week, and it more or less justifies the show's tendency to surround that substantial stuff with a lot of nonsense.


- We got another brief glimpse of Missy this week as she appeared to teleport one of the soldiers that was supposedly killed by Rusty's antibodies into her "Heaven". It seems that she is being set up as the villain for the season, and while I've long been critical of Moffat's handling of longer arcs on the show, I don't mind these brief teasers. It feels kind of X Files-esque, and has a much lighter touch to it than some of the serialised storytelling the show has done in the past. Plus, Michelle Gomez is great, and I look forward to seeing her crop up in ten second bursts every week.

- This episode also introduced Samuel Anderson as Danny Pink, a former soldier who is now teaching at the same school as Clara. We didn't get much time with Danny, other than to see him berate himself over being unable to ask Clara out (in the end she takes the initiative) and to learn that he has some trauma in his past, possibly related to killing a civilian. It'll be interesting to see how the show integrates him into the broader story - my current theory is that he has some as yet unknown connection to The Doctor - but his introduction served as a nice button to the episode's focus on soldiers and The Doctor's uneasy relationship with them.

- The CGI this week, particularly during The Doctor's conversations with Rusty, was distractingly bad. I hope this means that they're cutting corners to pay for a big spectacle later in the run, because otherwise it was just sloppy, even by the standards of Doctor Who.

- Some great Doctor/Clara sparring this week: "Any comments about my hips will not be appreciated." "Your hips are fine, you're built like a man!"
By Edwin Davies
Labels: Ben Wheatley, Doctor Who, Jenna Coleman, Michael Smiley, Peter Capaldi, review, science fiction, television
Newer Post Older Post Home