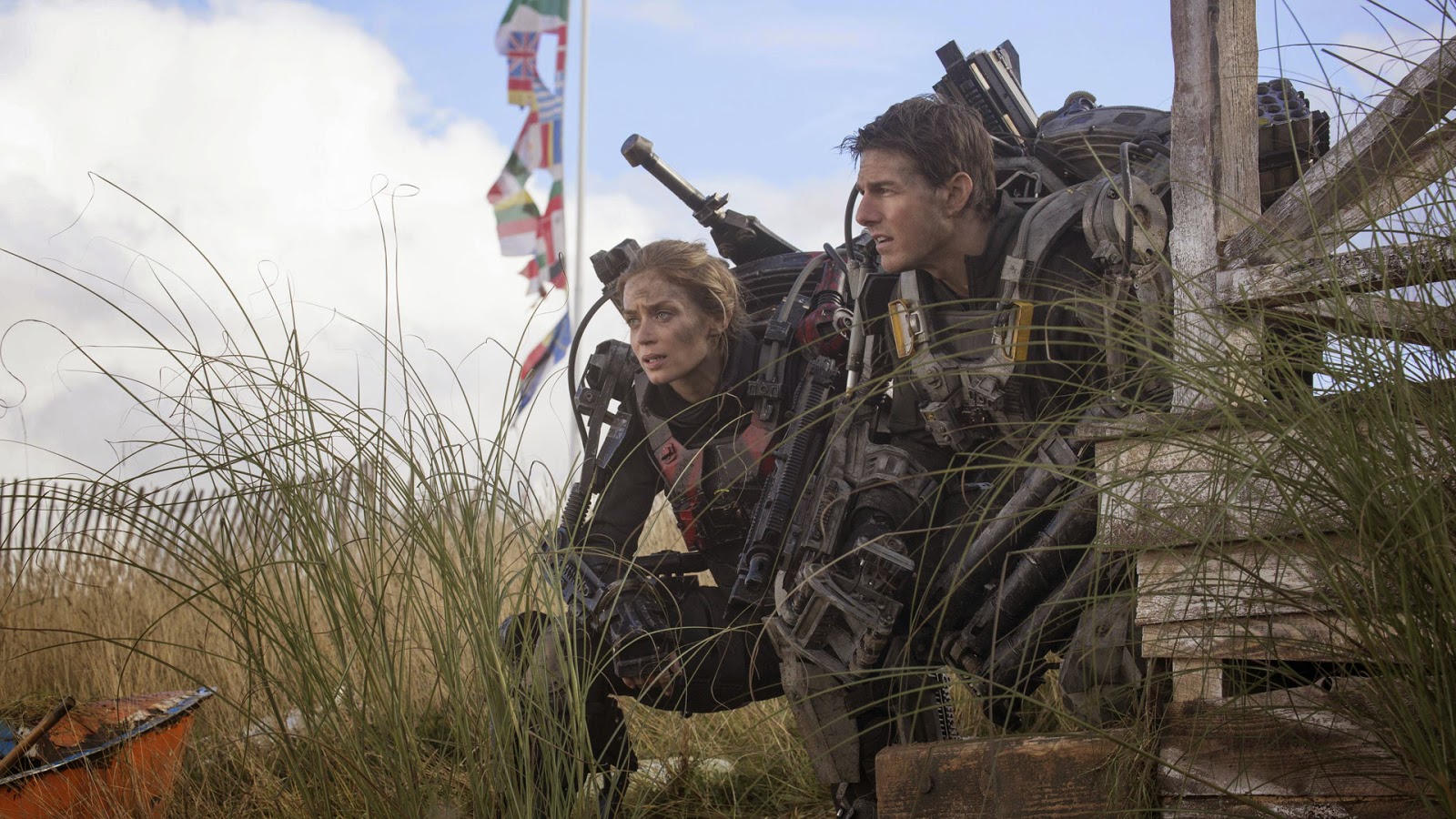 Tom Cruise has spent so long playing action heroes that it's jarring to see him play a coward. In Doug Liman's Edge of Tomorrow, Cruise plays William Cage, a recruiter for the United Defense Force who has convinced millions of young men and women to sign up to battle an alien race known as the Mimics. When the leader of the UDF (Brendan Gleeson) presents Cage with the chance to report from the front lines of the final assault on the Mimics' stronghold in Northern France, he declines, saying that he became a recruiter specifically to avoid combat. His refusal isn't accepted, so he is knocked unconscious. Upon waking, he discovers that he has been sent to a training camp where his commanding officer (Bill Paxton) has been told that Cage is a deserter. Against his protests, he is strapped into a mech suit so that he, along with thousands of others, can fight the Mimics on the beaches. Unable to even turn off the safety on his weapon, Cage is killed within minutes. Then, he wakes up back on the training camp, meets his commanding officer again, and realises that his whole day has been reset.

Tom Cruise has spent so long playing capable heroes that it's jarring to see him play someone so inept. After being presented with a second chance at life (though it's really a second chance at dying) Cage tries to explain to anyone who will listen that the attack will fail. His pleas fall on deaf (and soon to be dead) ears, so he gets sent back to the beach, makes it a little bit further, and dies once again. Edge of Tomorrow gets a lot of mileage out of playing variations on a theme; the film repeats phrases, images and scenes over and over again, often changing a few details here and there as Cage - and, by extension, the audience - gains knowledge. Cage has many of the same conversations over and over, but each time he knows more about the people around him and the futility of the war effort. It's a tremendous credit to Cruise that he grounds the character as well as he does, suggesting that he has seen and felt so many horrible things while remaining more or less resolute in his quest to succeed.

Tom Cruise has spent so long playing invincible heroes that it's jarring to see him play someone so fragile. His death-cycle eventually leads him to Rita (Emily Blunt), a legendary soldier nicknamed Full Metal Bitch, who went through the same thing he's experiencing before losing her ability to reset time. Between them, they try to figure out a way to defeat the Mimics and win the war. Unfortunately for Cage, that involves dying a lot. Even as its visuals borrow heavily from Starship Troopers and The Matrix Revolutions, the tone of Edge of Tomorrow is what really sets it apart. There is a dark, impish quality to the screenplay, co-written by Jez Butterworth, John-Henry Butterworth and Christopher McQuarrie, as it finds so many inventive ways to kill one of the biggest stars in the world. Cage is crushed, skewered, burned, drowned and shot multiple times over the course of the film; sometimes in combat, sometimes to reset things after he has suffered a debilitating injury, and, on at least one occasion, because he really, really annoyed Rita. The focus remains largely on Cage throughout, so as soon as he dies the world resets, but probably the funniest moment comes when it lingers for a second or two longer to register the disbelief on Bill Paxton's face after an escape attempt goes horribly wrong. Much of the humour (and the pathos) of the story comes from the distance that exists between Cage, who knows that he can mess up royally and he'll still get another chance, and everyone around him.

Tom Cruise plays a coward for so long that it's jarring to see him become a hero. The film's premise has been compared often to Groundhog Day, another film which found bleakly funny laughs in killing a major star while telling a story of self-improvement, albeit one with fewer giant mechanical squid beasts, but it feels more like a video game. Specifically, the idea of repeating the same day, trying to achieve a goal by accruing knowledge and experience, recalls the time travelling chicanery of Majora's Mask (while the idea of dying over and over, each time hoping to gain just a little more ground, will probably trigger flashbacks in Dark Souls fans), but in a general sense Edge of Tomorrow comes closer to replicating the often aggravating process of playing a really difficult game than any other media. That's a huge compliment to Liman and the screenwriters, both because the mix of humour and spectacle prevents the film from dragging or getting overly serious about its premise, but also because they replicate the sense of achievement that comes when you manage to beat a tough boss or solve a puzzle through arduous trial and error. The frustration Cage feels as he keeps failing, and the sense of sadness that creeps in as he sees people he cares about die over and over, feels natural, even as it's surrounded by a wholly insane idea.

Tom Cruise is so much fun to watch that it's jarring when the film actually ends. That video game-esque quality could be seen as deleterious to a story, especially one that is so action-orientated, because it could theoretically remove all tension. After all, not only is the hero essentially immortal, but so is everyone else around him; as soon as he dies, everyone who died comes back to life, even if they don't remember anything. But what's great about the film is that it introduces a way to end Cage's predicament fairly early on, then establishes that having his curse is more advantageous than not having it. That means that at some point the story has to reach a final destination, after which every death will, theoretically, count, creating a third act that is genuinely suspenseful where the rest of the film was entertainingly inventive in its lack of traditional tension. But even within such a rigid structure, Liman and his cast provide plenty of great moments. Cruise is at his most charismatic and funny; Liman stages the action with an eye for both shocks and laughs; Emily Blunt gives a performance which, by rights, should turn her into the next Sigourney Weaver. Edge of Tomorrow manages to turn each possible weakness into a strength, and in the process becomes one of the most inventive and purely enjoyable blockbusters of the year.