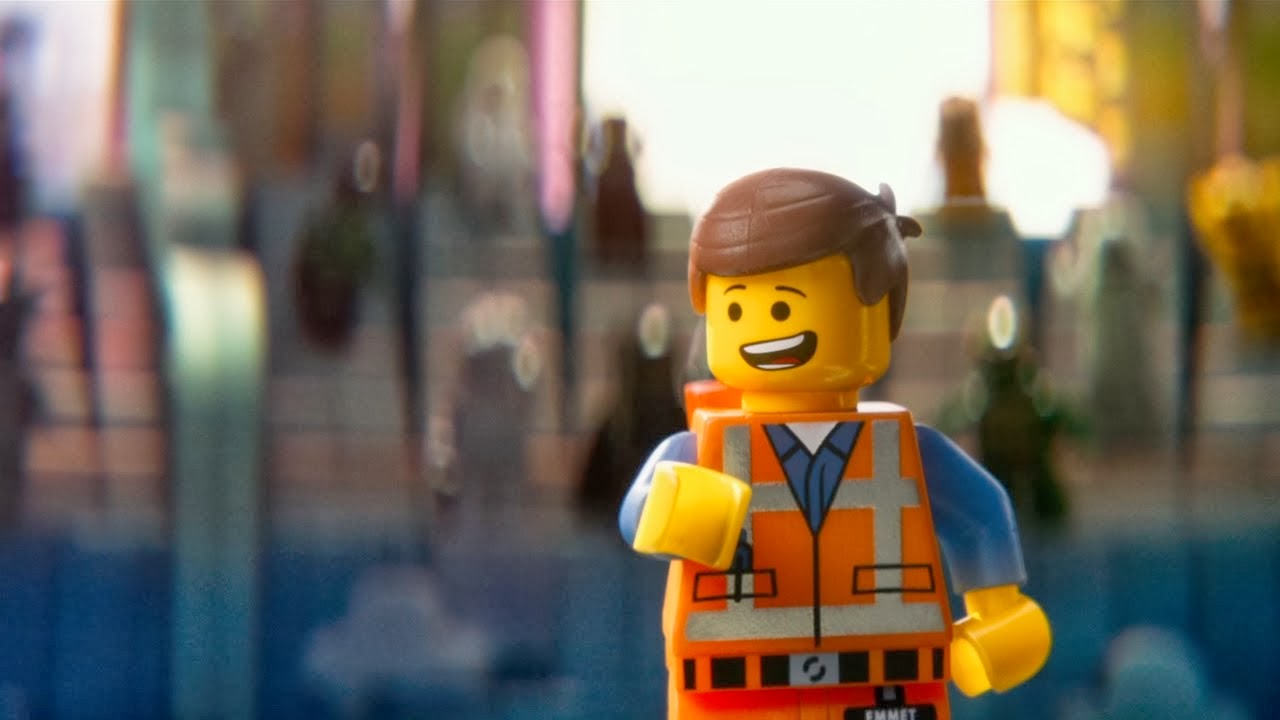 Emmet Brickowski (Chris Pratt) is a thoroughly average construction worker. Actually, average doesn't go far enough: Emmitt is consistently and thoroughly generic. He looks like everyone else in the city of Brickburg; he watches the same TV program that they do (a sitcom whose title and sole line of dialogue is "Where Are My Pants?"); he loves the one song that they play on the radio, a relentless perky electro-pop hit called "Everything is Awesome." Despite his adherence to following the instructions for living laid out by President Business (Will Ferrell), Emmet suspects that everything isn't awesome, and that maybe there's more to life than going to and from work. When he stumbles across a beautiful Master Builder named Wyldstyle (Elizabeth Banks) and a mystery block called The Piece of Resistance, Emmet is thrust into the middle of a desperate struggle to defeat President Business' plan to use a super weapon called the Kragle to destroy the world. The rebels become convinced that Emmet is the legendary Special destined to save the world. The only problem is that there is nothing remarkable about him. Like, at all.

There are plenty of reasons to be wary of The Lego Movie, not least of which being the fact that it's called The Lego Movie. The title suggests a lazy attempt at brand extension, of slapping a supremely famous word onto a film and hoping that people will go see it anyway. On first glance, it looks like it could be a cynical attempt to play on recognition and nostalgia; a marketing exercise, rather than a work of art. In the end, it winds up being both - how could a film called The Lego Movie, populated by Lego characters, not be an endorsement for Lego? - but it leans closer to being the latter than the former.

The key to what makes the film work as more than just cross-promotion is that co-writers/directors Phil Lord and Chris Miller have not just made a film using Lego, but a film about Lego. They understand that the appeal of those simple blocks, the thing that has kept generations of children playing with them, is that they allow for boundless creativity. You can follow the instructions and make a car or a building or a spaceship, but you can also smash them up and build anything you want. The tension between rigorously following the rules or breaking them lies at the heart of the film's narrative as Emmet tries to learn how to become a Master Builder and manipulate the world around him, and forms a central pillar of the quietly moving climax, but it also underlines the relationship anyone who has ever played with Lego has with it. Rarely has a film better understood the reason people love its source material (and it is most definitely based on 'material') than The Lego Movie.

The joy of unrestrained creativity runs throughout the film. Much as in Cloudy With a Chance of Meatballs, their earlier - and better - debut, Lord and Miller take the freedom to do anything they want and run with it. Using a style that is halfway between the smoothness of CG animation and stop-motion, they find plenty of big and little ways to squeeze every ounce of invention into the frame. The action is near-constant, frenetic and gleefully anarchic, but buried among the broad strokes are little details, such as the way that fire and explosions are created using tiny red, black and grey Lego bricks. This gives the film an agreeably home-made, verging on ugly, look that adds real warmth, one that a more anonymously smooth and clean style might have lost.

That relentless energy is initially very bracing, especially during the early scenes when the style is being established and each new use of Lego is a delight, but it's also a little tiring. Lord and Miller's style features an A.D.D. restlessness almost unheard of outside of the golden days of Zucker-Abrahams-Zucker. Their commitment to including as many jokes, be they high-brow or low-brow, as possible helped make Cloudy one of the best comedies of the last decade, but it only really works if the majority of the jokes are funny. While many of the jokes in The Lego Movie hit (my personal favourites: the sight of two of President Business' henchmen struggling with a giant Band-Aid and an ingenious use of a famous sporting catchphrase) there are plenty which fall flat. What it occasionally lacks in laughs it makes up for in invention (and a particular delight in throwing together various combinations of licensed Lego figures like Batman (Will Arnett), Superman (Channing Tatum) and dozens more which are too much fun to spoil) and by inculcating a general sense of excitement and energy, but there are plenty of times where it feels more busy than fun. That busyness might lessen on future viewings, much as rewatching Cloudy and 21 Jump Street helped unpack those films, but on initial viewings it does make the film a little exhausting.

Its brief lulls stop The Lego Movie from being across the board brilliant, but they are never enough to overshadow its many great qualities. It's a very fun, inventive, often flat-out weird film (Lord and Miller are the minds behind the brilliant, utterly bizarre Clone High, after all) that manages to cram a lot of sly, subversive elements into its story while working as a broadly accessible piece of entertainment. Where else are you going to see a film supposedly aimed at children that also acknowledges the inherent dickishness of Batman, overtly criticises consumerist society and the dangers of conglomerates, and both questions and subverts Joseph Campbell's Mono-myth to heartwarming effect? It might fall short of greatness, but The Lego Movie is, unlike its hero, utterly unique.