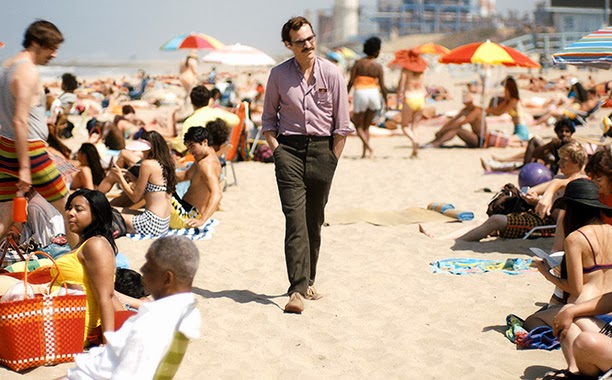 Like many great works of science fiction, Spike Jonze's new movie Her uses its futuristic visions to examine very contemporary and human truths. In particular, it explores our changing relationship with technology, as well as the way in which technology is changing our relationships. The former theme takes the shape of the growing friendship, then gradual attraction, between Theodore Twombley (Joaquin Phoenix) and Samantha, the new Operating System he has installed on his phone (voiced with equal parts naïf-like wonder and breathless sensuality by Scarlett Johansson). It says a lot about the verisimilitude of their relationship that Theodore's name is the least credible part.

The idea of a romantic, even sexual relationship blossoming between a man and his phone might seem a little far-fetched to most audiences (or maybe just to those who haven't spent a lot of time around people who are really into their iPhones) and it would be entirely understandable if Jonze decided to couch his central relationship within a broadly recognisable world. Impressively, he steers into the skid and hits us with three or four equally strange and audacious concepts before Samantha has even been introduced.

We first meet Theodore at work, where his job is to write personal letters for people who struggle to articulate their own feelings. The company is called 'Handwritten Greeting Cards', even though the letters are dictated to computers who then print them off. Theodore shows a remarkable talent for not just composing sweet, beautiful prose, but for helping to build and foster whole relationships for people he has never met. It's here that the film first touches upon how technology has reshaped human interaction, giving people an outlet for real emotion which is actual very artificial, but which they turn to because it has the sense of authenticity to it.

Theodore's job is strange, but it's also just an extrapolation of the same impulse that drives people to use filters to make their entirely digital photos look like old Polaroids; a desire to recreate a technological or sociological form of engagement that has evolved beyond the simplicity of taking a real photo or writing an actual letter. Her is full of such examples of technology or ideas we have now, which are then pushed ever so slightly further down the road, from the city Theodore lives in, which seems like a version of Los Angeles crossed with Hong Kong and Tativille, to the motion sensor game that he plays where he uses the movements of his hands to propel his avatar after a foul-mouthed little creature who guides him through a series of caves. (Incidentally, that game generates some of the film's biggest laughs. As melancholic as Her is at times, it's also really, really funny.) It's a brilliantly realised near-futuristic vision, one that doesn't go completely crazy in imagining how we might live in ten or twenty years time, but goes just crazy enough.

In comparison to the more audacious stuff swirling around them, the relationship between Theodore and Samantha is probably the most grounded part of the film. This is largely thanks to the charm of the two performers, who have an easy chemistry with each other that transcends their never actually sharing the screen (or, indeed, the set, since Johansson was brought in to replace Samantha Morton, who originally played the part, during post-production). It also helps that everyone in the film treats their relationship as being within the realms of normal behaviour, rather than as an aberration: when Theodore admits to his best friend Amy (Amy Adams) that he's involved with his OS, she reacts as if it's a new, exciting thing for him, but not necessarily weird. Jonze does take the relationship into odd, uncomfortable areas during a scene in which Samantha hires a surrogate to have sex with Theodore, but even then the point is not that their central relationship is strange within the world of the film, but that it is changing and that they aren't on the same page anymore.

For all its technological trappings, Her is primarily a story about the human capacity to grow and change, and how that can both allow us to experience new things and open ourselves to new people, but which can also leave us open to pain and anguish. Samantha, being capable of connecting to all the information in the world, grows and changes at a rate that Theodore can't hope to match, and the gap that appears between them grows gradually until it is unbridgeable. While that dynamic is contained within a fantastical conceit, it's an idea that can be applied to any relationship or friendship. Sometimes you outgrow people or they outgrow you, and while it's painful for both parties, ultimately it's much harder on the one left behind.

Her is not without its problems. The script, while inventive and often truthful, suffers through longeurs once the initial rush of being introduced to so many new images and ideas wears off, and it can leave the film feeling a little aimless. Some of the supporting characters are barely sketched, which doesn't matter so much in the case of Chris Pratt, who plays one of Theodore's co-workers, but is a little disappointing when Theodore's ex-wife (played by Rooney Mara) lacks the depth necessary to explore why that key relationship in his life failed. Still, it's such an emotionally raw and resonant work that it overcomes these fairly minor weaknesses. I found it to be deeply moving and achingly true.