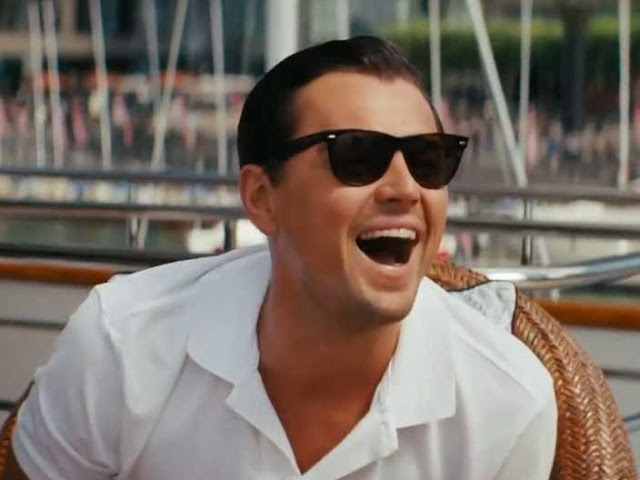 Jordan Belfort (Leonardo DiCaprio) is a man of many passions and interests, chief amongst them being sex, doing enough drugs to incapacitate the population of Manhattan, and money. So much money; hire midgets so you can throw them at a giant bullseye money. As a stock broker who loses his job at a reputable (by Wall Street standards) firm, gets filthy rich by conning people into buying super cheap shares on which he gets a high commission, then sets up shop with his business partner (Jonah Hill), he is able to live a lifestyle of cartoonish excess. But as profits soar and parties get ever more extravagant, Belfort starts to attract the attention of an FBI agent (Kyle Chandler) who doggedly pursues him and his associates. But when you're obscenely rich, what does it matter if you're breaking the law?

Much has been made about the The Wolf of Wall Street's length, and the apparent difficulty that Scorsese and his long-time editor Thelma Schoonmaker had in whittling it down to a mere three hours in time for its release date. It's certainly true that not every moment is utterly essential to the story of Belfort's real-life rise and fall, with some scenes in Terence Winter's (The Sopranos, Boardwalk Empire) script feeling extraneous and others going on far longer than one might expect - such as a gleefully silly sequence in which Belfort, high on Quaaludes, loses all his motor functions and has to crawl along the floor to get to his car, which gets progressively more hilarious as it becomes apparent just how difficult the whole enterprise is going to be. Yet it's hard to imagine even the most indulgent scenes being cut without harming the vision that Scorsese puts forth, one which justifies the bloat as being thematically appropriate.

To put it plainly, The Wolf of Wall Street is an excessive and unrestrained film about an excessive and unrestrained world. It's the sort of film that can feature Leonardo DiCaprio walking around with a monkey dressed in a suit and on rollerskates for a ten second sight gag, rather than having such a bizarre image serve as the basis for a whole scene. While the film is very long, especially for a comedy, its length is less important than what it does with it. It's an exhausting experience, one that flies along on the back of Scorsese's forceful, flowing camerawork and electrifying use of music, but it's rarely dull.

Its outrageousness is all the more notable because of how plentiful yet brief a lot of it is. For example, there are multiple, fairly explicit orgies dotted throughout the film, but they're all treated as background details, as a handy illustration of just how little control anyone had over what was going on at Stratton Oakmont, the firm Belfort founded, and how a culture of rampant - some might say unregulated - machismo manifested itself both as financial greed and recklessness, and an almost Caligula-esque degree of sexual debauchery. As well as driving the film with a stream of constant, propulsive voiceover, DiCaprio frequently breaks the fourth wall to directly address the audience, often to illuminate a particular aspect of Belfort's crimes. In these moments he delivers the lines with a cheeky grin that practically screams "Can you believe the shit we're getting away with?" Given the lurid, joyfully vulgar content of the film, it feels like a sentiment shared equally by the character and the man portraying him.

As the eye of the hurricane, the centre around which a maelstrom of utter chaos and depravity whirls, DiCaprio is utterly magnificent. Not only does he display the same level of commitment and intensity that he brings to all his roles, anchoring the story with a blistering portrayal of someone consumed and driven by his various appetites, but he also seems to be having an absolute blast playing someone who not only doesn't believe that the normal rules of society apply to him, but doesn't realise that they exist in the first place. Jordan Belfort is an utterly amoral creep, someone who has no qualms with scamming people out of their money with bogus stocks, but he's also such tremendous fun to watch.

Much as in Goodfellas, a film to which The Wolf of Wall Street bears more than a passing resemblance, Scorsese captures the exhilaration of crime, albeit of the white collar variety, and the sheer exuberance of not being beholden to conventional morality. A large part of why the film succeeds is due to how compelling DiCaprio is, as well as how unexpectedly funny he can be. The aforementioned crawling on Quaaludes scene, in particular, displays a knack for physical comedy that you would never expect from someone who is often so unrelentingly serious. DiCaprio also sparks wonderfully off the rest of the cast, from Hill as his best friend (and the closest the film has to a Joe Pesci type, to further the Goodfellas comparison) to Rob Reiner as his volatile father and Matthew McConaughey, who only appears briefly as Belfort's mentor, but makes every second count with an hilarious, wonderfully off-kilter performance. Though DiCaprio is what gives the film its unwavering focus, it boasts a brilliantly conceived and executed ensemble.

Yet even though it works as an often brutal comedy, and as a faintly flabbergasted look at the underbelly of Wall Street at its most venal and corrupt, The Wolf of Wall Street is also a deeply moral film. While it delights in showing the ridiculousness of Belfort's excesses, it also emphasises that he and men like him are rarely forced to confront the effects of their criminality. At no point do we see, or even hear, about anyone whose lives were ruined by Belfort, a choice that underlines just how little the people on the other end of the telephone mean to the people selling them on an impossible dream. It also cruelly underlines how Belfort and his kind are able to escape true justice and live in luxury, while the men who try to take them down are ignored.

More than that, it shows how a charismatic, almost shamanic figure like Belfort is able to survive and thrive, even after facing superficial punishment, because everyone else fails to learn anything from their example. Men like Jordan Belfort are only able to exist because people still want to get rich, and they allow themselves to be conned in pursuit of wealth. It's a somewhat bitter pill to swallow after three hours of delirious fun, but it's a necessary one. Every bubble bursts, eventually, yet people will always willingly help to create the next one.