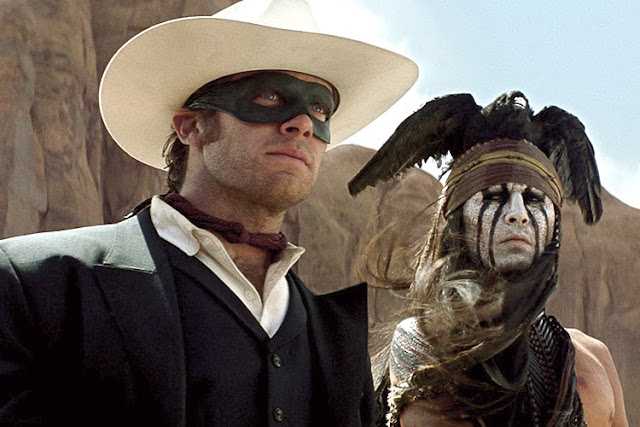 While helping to transport the dangerous criminal Butch Cavendish (William Fichtner) so that he can be brought to justice, District Attorney John Reid's (Armie Hammer) train is attacked by Cavendish's men and the outlaw is freed. Reid heads out with a posse of Texas Rangers that includes his brother Dan (James Badge Dale), but which is promptly ambushed. Left for dead, Reid teams up with the Native American tracker Tonto (Johnny Depp) to hunt down Cavendish and avenge his brother's death. To protect his identity, Reid dons the mask and identity of The Lone Ranger, and with Tonto and his white, possibly mystical horse in tow, he follows Cavendish's trail, right into the heart of a huge conspiracy.

Considering that it's already developed a reputation for being one of the worst films of the year, I think it's necessary to say up front that The Lone Ranger is not by any means a bad film, and certainly not when compared to a lot of contemporary blockbusters. It's definitely a very flawed film, and it's the sort of film where the flaws are so central that you have to actively overlook them to really enjoy it, but it's an often deliriously entertaining blockbuster with a great central dynamic between Johnny Depp and Armie Hammer, some utterly glorious action scenes, and a generally fun vibe that sets it apart from some of the summer's more grim and joyless offerings.

It is, however, extremely long and incredibly bloated, even by modern standards. There's a very episodic feel to The Lone Ranger, one that feels somewhat appropriate given that the character originated on radio serials back in the 1930s, and while each individual chunk of the film has some interesting or weird element to it (not least of which being Helena Bonham Carter's small role as a prostitute with a ivory leg that doubles up as a shotgun: Gore Verbinski remains one of the most relentlessly odd blockbuster directors currently working) a lot of them feel like distractions from the main story. More than anything, it feels like several episodes of a serialised story that have been strung together in a row; each segment has its own internal rhythms, but when combined they make for a lumpy experience. This is especially true whenever the film cuts to the story of Dan Reid's widow (Ruth Wilson), which feels like an element that could have been completely excised, but was only left in so that The Lone Ranger would have a token love interest.

The most fundamental problem with The Lone Ranger, the one that is the most difficult to overlook because it's staring you in the face for pretty much the whole two and a half hours, is the casting of Johnny Depp as Tonto. That's not a reflection on his performance; his stony-faced turn, which is Buster Keaton-like in its ability to appear nonchalant around out of control trains, is far and away the least insufferable performance he's given in years. It also makes for a nice contrast with Armie Hammer's portrayal of John Reid as a man constantly wrong-footed by the situation he finds himself in, and their interplay as reluctant partners who are constantly insulting each other carries the film through its frequent longeurs between set pieces. It's not by any means a bad performance.

What it is, however, is wildly inappropriate (both in a broader context and within that of the film itself), insensitive and, perhaps most troubling of all, completely understandable. The Lone Ranger takes a lot of crazy risks for a Hollywood blockbuster, not all of which are successful, but enough of them are that it's clear that Gore Verbinski had a definite vision of what he wanted to do; he wanted to create a big, brash Western full of derring do and the sort of huge, Rube Goldberg action scenes that he's been doing for most his career. To that end, the film is a roaring success, with its opening and closing scenes, both of which involve hugely complex and intricate fights on runaway trains, are deliriously inventive, displaying a cartoonish sensibility that recalls the best work of Chuck Jones or Joe Dante. For all its other problems, no blockbuster released this year (except maybe Pacific Rim) so clearly showed that the person directing it was having so much damn fun playing with such a big - and very literal - train set, and none displayed the same level of old-fashioned, honest to God craftsmanship when constructing its action. It's hard not to get swept up when the William Tell Overture, one of the most rousing pieces of music ever written, strikes up and Armie Hammer starts riding a horse over buildings and jumps between trains. It's joyous, so much so that I watched the finale three times in a row.

But the film isn't just action spectacle: it's also meant to act as a commentary on the ways in which Native Americans have been subjugated and exploited for profit by white men, often through entertainment. That idea underpins almost every aspect of the story, from the framing device (in which an elderly Tonto recounts his adventures to a young boy dressed as The Lone Ranger while playing the part of a "Noble Savage" in an exhibition), to the villain's secret plan (which involves their henchmen dressing up as Comanche and attacking settlements in order to start a highly profitable war) and even Tonto's back story (in which he is duped into a trade which has dire and far reaching consequence for his people). Even though it's presented as  a straightforward Western, there are a lot of revisionist elements to The Lone Ranger - including frequent visual and musical nods to Sergio Leone's Once Upon a Time in the West, and whole pages of dialogue seemingly borrowed from Jim Jarmusch's Dead Man - which set it up as a film with a very serious point to make about how the pioneers of the American West, the very people lauded by Westerns for boldly striking out and shaping the nation, were murderers and liars who all but destroyed an entire race of people in pursuit of personal gain.

It's a very important and serious point, one that a lot of American culture glosses over or actively disguises because it's such an unsettling truth, but it's one that the film never successfully squares with the fact that its lead Native American character is played by a white man. At best, it's a recognition of the somewhat shameful reality that no one would greenlight such a lavish production if Tonto was played by someone who wasn't one of the biggest stars in the world, and that there are no Native American actors who could fill that particular criteria. At worst, it's rank hypocrisy that completely undermines the broader points the film is trying to make about a culture of exploitation by actively continuing and engaging in it. (It's possible that Depp's casting is all part of some meta-commentary about that same culture, an attempt to exploit the exploiters from within, which could cast the framing device in a different light, but that feels like an extra layer of meaning that the film itself isn't strong enough to shoulder.)

Now, it's completely possible to put aside that aspect if you really try, and it's probably the best way to enjoy the film as pure entertainment, but I don't think we should ignore it. More importantly, I don't think Gore Verbinski thinks you should ignore it, either, which is why he made a huge Western that deliberately tears into key foundation myths of American society. Yet that one casting choice is so bizarrely at odds with what seems to be the point of the entire enterprise that it can't help but be distracting, and more than a little off-putting.

While it is undoubtedly something of a mess, with many plot elements that feel like limbs that could have easily been hacked off without harming the body, and its central casting misstep is one that is hard to overlook without also ignoring any salient points it tries to make about race and representation, The Lone Ranger is a fun film. It's bookended by two of the most exhilarating action scenes of the year, and while the stuff between those scenes is incredibly variable, there's something to be said for something that begins and ends so brilliantly, as well as for the existence of chapter menus on Blu-rays.