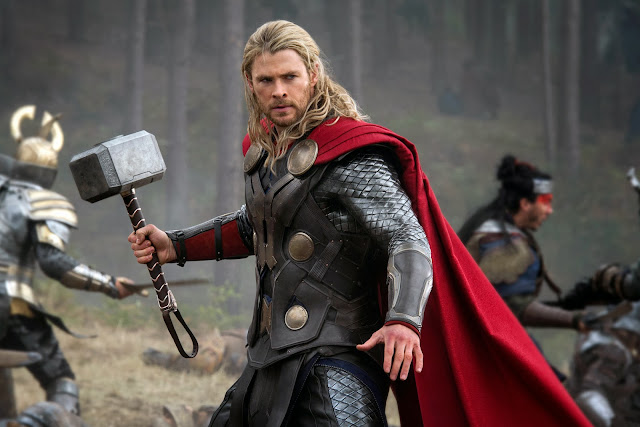 Even in a shared cinematic universe that features super-soldiers and men who transform into giant green monsters when they get a bit cross, Thor always seemed like a bit of an outsider when it came to becoming an iconic film character; injecting Norse mythology into Marvel's more science fiction orientated world seemed like it would be destined to lead to a work of disastrous camp. While Kenneth Branagh's Thor was a somewhat divisive film, with some saying its goofy sense of humour went too far in deflating the pomposity of its faux-Shakespearean stylings and others, myself included, saying that it struck just the right balance between the two, its main success was in establishing Thor (played with sly wit and bountiful charisma by Chris Hemsworth) as a believable, if larger than life, character, and it took him on an interesting journey from arrogant God to humble, worthy hero.

The downside of taking Thor on that journey in the first film presents itself fairly early on in the Alan Taylor-directed sequel: if he's not a pompous, bellowing lout assured of his own power, Thor is kind of a drip. Much of what made the first film such fun was the fact that it was a fish out of water comedy in which a man who cavorts around like a Viking has to figure out modern day Earth. While there are glimmers of the old Thor in Hemsworth's performance - particularly in an early battle scene in which he dispatches his enemies with a wry smile - he's a more stoic, brooding presence than he was before, intent on mooning over his distant love Jane Foster (Natalie Portman) than the business of preparing to rule the realm of Asgard in the stead of his father Odin (Anthony Hopkins).

Thor: The Dark World follows the lead of its protagonist by being an all together more serious offering than its predecessor. Taylor, a veteran television director who is probably best known for his work on The Sopranos and, more apropos for the world of Thor, Game of Thrones, tones down most of the excesses of Branagh's Asgard, making it less day-glo and chintzy in favour of more somber, autumnal hues. It's not a bad decision considering that much more of the story takes place on Asgard this time around and the old colours would have become headache-inducing if exposed to for too long, but it does underline the sense that the series is rapidly heading further away from the light touch that made the first film so enjoyable.

Not that the film is entirely without a sense of fun, but it's contained mainly to the scenes on Earth, where Jane and her intern Darcy (Kat Dennings) investigate bizarre gravitational anomalies similar to those that appeared when Thor first arrived on Earth. This ties into the broader plot, which sees a group of long-banished Dark Elves (led by Christopher Eccleston under pounds of makeup) seeking to take advantage of a convergence of the nine different realms to conquer them all, but it's mainly an opportunity for Portman, Dennings and Stellan Skarsgård to play the cheerful support team to Thor, complete with scenes of Skarsgård running naked around Stonehenge and Portman engaging in an obviously doomed relationship with Chris O'Dowd.

The other font of humour in the film comes in the form of Tom Hiddleston's Loki, returning as a Hannibal Lecter figure who offers a little quid pro quo in order to help defeat the Dark Elves. As was the case in Thor and The Avengers, Hiddleston energises the screen pretty much every second that he is on it purely because he's clearly having such a good time being bad, and watching him gleefully run circles around everyone else is hugely entertaining. Unfortunately, he's sidelined for much of the film, and whenever he is included it only serves to highlight just how bland the actual villains are. It probably wouldn't have been wise to have him be the main villain in three consecutive films, but it does mean that his main role is to save the film from its somewhat glum first hour, rather than to help bolster an all-round entertaining experience.

However, once Loki truly enters the fray, Thor: The Dark World does gel into something much more satisfying. The plot remains murky, the Dark Elves uninteresting and the tone generally a bit morose, but it does develop a fantastic energy that propels it to its climax with great zest. In particular, the action is very well staged and makes good use of the aforementioned anomalies, allowing for some witty, physics defying sequences. Even at its low points, Hemsworth and the cast keep things moving, it's just a shame that the film takes over an hour to become the sort of fun blockbuster that the first film was from the start.