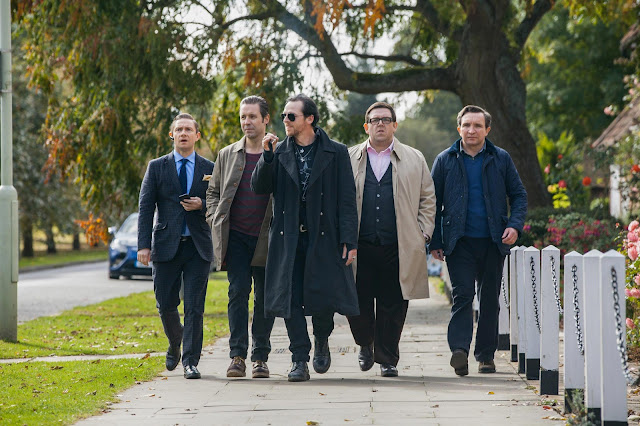 They say that school days are the best days of your life. It's a lovely thought, especially since it conjures up images of youthful exuberance untainted by the responsibilities of adulthood, but also an insidious one. After all, for school days to be the best days of your life, everything afterwards has to be all downhill. All the excitement, joy and promise has to fizzle out into nothing, leaving only fond memories of a future that never came to pass. Gary King (Simon Pegg) not only sees school as the peak of his life, but one night in particular. Back in June of 1990, he and his friends Andy (Nick Frost), Steven (Paddy Considine), Oliver (Martin Freeman) and Pete (Eddie Marsan) embarked on an epic pub crawl through their home town of Newton Haven. They had intended to drink in all twelve drinking establishment along the fabled Golden Mile, but ultimately they failed. Regardless, it was the best night of Gary's life, and everything since then has been a sad, sorry decline.

It's while recounting this story to a support group that Gary strikes upon a moment of inspiration; he'll get his friends back together, head back to Newton Haven and try to conquer the Golden Mile. After some cajoling, needling and outright lying, he crams everyone into his battered old car and they head off. But it soon becomes apparent that you really can't go home again, especially when your home has been taken over by robots that spew blue light.

I've been a huge fan of Simon Pegg, Edgar Wright and Nick Frost since Spaced debuted on Channel 4 back in 1999. I think it's fair to say that their work has done more to shape my sense of humour and comedic sensibilities than anything else, with the exceptions of Monty Python and The Simpsons. I've followed their careers with great excitement, especially once they made the leap from television to cinema with Shaun of the Dead, and went into The World's End with very high hopes and more than a little trepidatious: the most stressful thing about being a fan is knowing there is always the chance that the people you admire will let you down. While The World's End is undeniably a much messier affair than any of their previous endeavours, it certainly didn't disappoint.

The brilliance of Wright and Pegg's work as writers is their ability to weave together the standard connective tissue of different genres - be they zombie, action or, in this instance, Invasion of the Bodysnatchers-style science fiction - with social commentary and genuine emotion. It's a heady brew that can leave an interesting aftertaste, and it also lends their films a density that can be a little hard to digest in a single sitting. This is particularly true of The World's End, which not only has copious amounts of back story that it needs to deal with right up front, establishing all the characters in a montage/voiceover sequence that is breathlessly delivered by Pegg and blisteringly assembled by Wright, but it has to layer its decades old friendships on top of a science fiction conceit which is not as immediately easy to grasp as "slacker vs. zombies" was for Shaun.

Wright and Pegg cleverly get around the complexity of their central metaphor by tying it to something incredibly earthy. The robots that have replaced the people of Newton Haven are shown to be the equivalent of big chains that buy up small traditional pubs and turn them into homogenous, identikit franchises completely bereft of personality. When Gary and his friends return to their hometown, the eeriness of change is foreshadowed by the way that every pub now looks exactly the same, which then folds easily into the broader critique of how individuality can be stamped out by adhering to a seemingly benign status quo. It's a very subtle way of grounding the craziness that unfolds as the characters progress along the pub crawl, especially since it allows the metaphor to fall into the background a bit in order to focus on the interplay between the central characters.

As much as The World's End is a science fiction film and a satire, it's also a very funny story about a group of friends who have drifted apart, but who reluctantly come back together for one last night out. What's great and incredibly true about that is the way in which the five key actors suggest a tremendous history between them, one which gradually begins to control them as the night goes on. They start out as a group of middle-aged men who are happy to see each other, but by the fourth or fifth pint they've pretty much reverted to being exactly the same as they were when they were eighteen. (Except for Gary who, somewhat tragically, never really stopped being eighteen.) They all have great chemistry with each other and within moments of meeting Gary we know instantly what each individual character's relationship to him was like, as well as why they drifted apart.

The main reason being that Gary is a raging arsehole. A blinkered narcissist who browbeats everyone into doing exactly what he wants them to do, Gary King is probably the best character that Pegg and Wright have created, and definitely the best that Pegg has played. (As well as representing a nice reversal for Pegg and Frost's usual dynamic, with the former being the fuck-up and the latter being the character who seems to have himself together.) Most people probably know a Gary: the person who is the life of the party right up until they get everyone thrown out; the one who has boundless charisma yet zero charm; the one who brings chaos with them wherever they go. Pegg is not afraid to make Gary relentlessly unlikable - to the extent that one of the main criticisms I have read about the film is that it's impossible to root for him. That's certainly true in the beginning, but once the pints start flowing and the punches start flying, his redemptive arc struck me as achingly poignant, especially once the film begins to delve into just how pathetic he is beneath the bluster.

Because ultimately, The World's End is about the danger of romanticising the past, a danger which Gary fully embodies. While the soundtrack is awash with songs from Gary's late '80s, early '90s heyday, recalling much happier days for everyone concerned, his journey is much darker than the songs might suggest. It's an obsessive, desperate one about someone trying to claw back some remnant of glory, and believing on some level that making it all the way to The World's End pub will give him a sense of closure. It would be a triumph after years of failure, but a very sad and small one. Even with the manic fight scenes and hilarious script, The World's End is a very bittersweet film about the disappointments of adulthood, but also about the symbiotic relationship between those disappointments and the allure of nostalgia. One feeds the other, and the end result is a broken figure like Gary King.

Frenetic and exhilarating, funny and heartbreaking, The World's End is another great comedy from one of the best filmmaking teams to come out of Britain in decades. It seems to peter out a little towards the end as the themes overwhelm the narrative, but even then it's so entertaining that it matters comparatively little. It's a fine topper to the so-called Cornetto Trilogy, though I prefer to think of it as just the start of whatever strange path Wright, Pegg and Frost decide to take next.