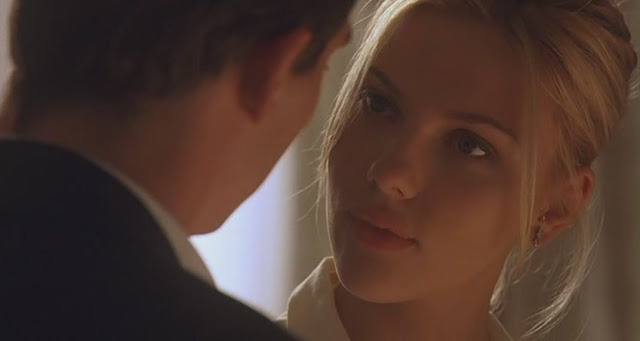 After a five year run of comedies which were received indifferently by both critics and audiences, and more often than not deserving that reception, Woody Allen returned to favour in a pretty big way with Match Point, which not only became his most successful film for the better part of two decades, but received rave reviews and landed Allen an Oscar nomination for Best Original Screenplay, his first since 1998. It's not hard to see why it garnered so much attention since it represented such major departure for him; it was his first primarily dramatic film in years, the first film he had shot entirely outside of the United States since Love and Death and his first thriller, although it doesn't initially appear to be one.

Chris Wilton (Jonathan Rhys Meyers) is a poor Irish tennis coach who has just moved to London. Through a mixture of skill and good fortune, he ends up being the personal trainer of Tom Hewett (Matthew Goode), the elder son of a rich family headed by Brian Cox and Penelope Wilton. The two become fast friends, and Chris starts going out with Tom's sister (Emily Mortimer), gets a high-paying job at the firm run by Tom's father and looks set for a life of luxury as part of the Hewett clan. The one fly in the ointment is that Chris can't keep his eyes or his hands off Tom's girlfriend Nola (Scarlett Johansson), a struggling American actress who Chris finds utterly irresistible. As their affair progresses, Chris builds a web of lies around himself to protect his subterfuge which grows increasingly claustrophobic, forcing him to look for any way out of his situation.

While Allen is rightly lauded for his work as a comedian, he is an equally adept dramatist, as his Bergman-esque dramas like Interiors demonstrate, though his dramatic work tends to work best when the darkness is cut with laughter. It acts as a release valve that casts the bleaker elements into sharp relief, and acknowledges that humour can exist in even the most overwhelmingly sad or angry moments. Match Point is rare then for being a Woody Allen film which is pretty much entirely devoid of laughter, apart from the incongruity of seeing, say, Mark Gatiss or Paul Kaye showing up in a Woody Allen film (a pleasure which is decidedly Anglo-centric). It's an immensely pensive film defined by the cold, clinical manner by which Chris conducts his affair with Nola, before gradually giving way to tension as he tries to keep the two sides of his life from ever meeting, before guilt takes over as he realises that drastic action needs to be taken to resolve the mess that he has created for himself.

Even though it's not his most sombre film, Match Point is probably Allen's most bleak and nihilistic. Chris is obsessed with the idea that people have almost no control over their lives, and that everything that happens is more often than not due to luck than human agency. The story reflects that, since almost every event in Chris' life hinges on him being in either the right or wrong place at exactly the right or wrong time, allowing him to see something that he shouldn't or to take advantage of an opportunity that will help him get what he wants. That could be viewed as a cheap means of disguising the contrivances of the plot behind a theme, but the theme is so ingrained in the character of Chris and his worldview that it enhances the icy, dispassionate quality of the film. It feels like an adaptation of a Patricia Highsmith novel that she forgot to actually write, with Chris Wilton as Tom Ripley sans charm.

While it is undoubtedly one of Allen's most cold and mechanical films, it's also one of his most sensual. Whereas most of his films are about romantic love and the neuroses that result from it, Match Point is solely concerned with animalistic lust, and the scenes between Chris and Nola practically throb with desire. From their first scene together, in which Chris teaches Nola how to play table tennis better, the film shows that they are in the thrall of the same unstoppable, doomed passion that drove Fred MacMurray to kill Barbara Stanwyck's husband in Double Indemnity. It's a force as undeniable as gravity, and Johansson ably embodies an ideal of desire without losing sight of the incredibly messed up person who is excited, then hurt by it.

Chris comes across as a ruthless social climber determined to do anything to get ahead, an impression that is furthered by Meyers' thoroughly unlikable performance. His performance actually verges on being awful since he comes across as so insincere - hobbling the idea that he is some sort of great liar - but viewed as an extension of the idea that Chris achieves everything through chance, it makes the performance make sense in context; he doesn't have to be charming or charismatic, he just needs to know how to take advantage when presented with an opportunity. It also adds some power to the scenes where everything becomes a bit too much for Chris, especially during the film's incredibly strong, guilt-wracked final act. Any sign of genuine feeling from someone who otherwise seems sociopathic has tremendous impact, especially from a character who starts out as borderline reprehensible and just gets worse from there.

Like a lot of the films from that era of Allen's career, Match Point is a little flabby in its editing and feels like it could have done with some trimming, especially considering how long it takes to force Chris to take action, but it also has a certain elegance to its construction. Allen's script shows terrific economy in setting up who Chris is and how he relates to everyone, then takes its time in laying the trap from which he has to extricate himself. The ultimate resolution might feel a little cheap and easy considering how well everything else is set up, but then again it feels thematically correct given how everything else in the film is as dependent on luck (or, less charitably, massive contrivances) as the denouement.

Ultimately, whether or not Match Point works for you depends on where you land on its ideas about luck; if you buy into them, then the film is a pretty tightly wound thriller than uncoils at precisely the right moment. If you don't, then it's an overwrought, contrived film about an utter bastard who deserves justice for his misdeeds. I fell firmly into the former camp, but it is, appropriately enough, very much down to the luck of the draw.